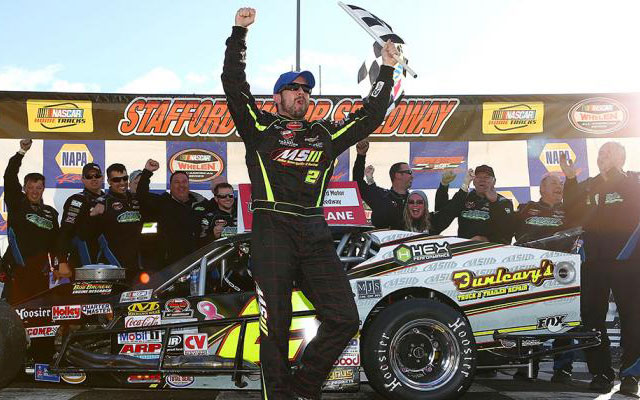 THOMPSON, Conn. — Three races after it appeared Doug Coby’s efforts to repeat as NASCAR Whelen Modified Tour champion were in jeopardy, he’s back in the driver’s seat

The Milford, Connecticut, driver rolled to his second straight win Sunday in the NAPA Fall Final 150 at Connecticut’s Stafford Motor Speedway and will head into the season finale as the championship points leader.

Ryan Preece, the 2013 champion who was the runner-up to Coby in 2012 and 2014, rebounded from an accident and pit road penalty to finish second at Stafford. Woody Pitkat, who entered the penultimate race weekend with the points lead, finished 12th after being involved in a late-race wreck.

The result is Coby will head to the season finale even in points with Preece. They are both four points ahead of Pitkat going into the Sunoco World Series 150 at Connecticut’s Thompson Speedway Motorsports Park on Sunday, Oct. 18.

Coby has six wins to Preece’s four and Pitkat’s one. 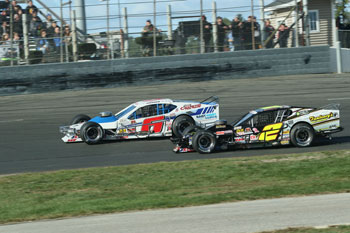 It’s a dramatic turn of events for Coby, who wrecked on Lap 2 at Bristol Motor Speedway on Aug. 19 and left the World’s Fastest Half-Mile 33 points out of the lead. He finished second at New York’s Riverhead Raceway before winning at New Hampshire Motor Speedway and Sunday’s race at Stafford.

Timmy Solomito was third at Stafford, followed by Donny Lia and Shawn Solomito.

“Ryan was very strong and the two of us were taking off the first half of the race,” said Coby.  “I knew he wanted to lead as many laps as he could for the bonus point and I just wanted to lead one lap.  He drove his tail off to keep me behind him and we did what we had to do.  He had some problems on the restart and we didn’t so we got out front and here we are in victory lane, first time ever in the Fall Final.  It’s a special feeling to win this race.  It’s something that I’ve been coming to since I was 16 years old and tried in so many different divisions to win.  Great day for our team, the car was awesome all day and Ryan was strong.  I would say Ryan was even a little stronger than us.  The harder I tried to get him, I couldn’t but once we got out front, I know he had some issues and I saw that Woody [Pitkat] had some issues, so I was just running my line.  I can’t thank my team enough, they just work so hard and whether you’re a fan of ours or not, appreciate a car that comes to the track well prepared every week and a team that does their job.  They had a great pit stop and it’s not just about me driving the car around the track against Ryan.  It’s about this team really putting in a huge effort to try to win this championship and I’m really excited.  I have no idea what points look like right now so we’re just going to try to lead the most laps at Thompson and win the race.  I’d love to win out and get 3 in a row at the end of the year.”