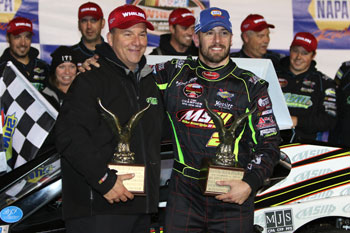 Despite a delay of a week, and nearly seven more hours during a rain-drenched Sunday, Coby still reigns supreme with a victory in the NAPA Fall Final 150.

Coby rolled to his 10th career victory at the historic half-mile – now trailing only Ted Christopher’s 12 – and extended his lead in the NASCAR Whelen Modified Tour championship standings to 20 points with one race to go.

It was Coby’s fourth win in the last five tour races at Stafford. It also marked his fifth overall in 2016, and 22nd of his career.

Justin Bonsignore entered the race trailing Coby by 13 tallies. The pair started the rain-delayed race 1-2 and traded the lead early, but Bonsignore experienced a mechanical issue and lost a lap on pit road. He was able to earn the subsequent free pass, and made it back to fourth to salvage a good finish considering the circumstances, but lost seven points on Coby in the process.

The Whelen Modified Tour will conclude its season and crown a champion in the Sunoco World Series 150 on Oct. 16 at Connecticut’s Thompson Speedway Motorsports Park.