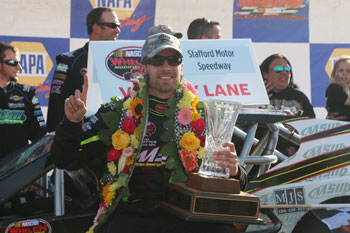 STAFFORD, Conn. – Doug Coby didn’t win the season-opener a couple of weeks ago, but he made everyone aware Sunday at Stafford Motor Speedway he’s still the driver to beat to win the NASCAR Whelen Modified Tour championship.

Coby started from the pole and led a race-high 192 laps to win the NAPA Spring Sizzler 200 for his 18th career win overall and third in the 45th annual spring event at the historic speedway located in Stafford, Connecticut.

The two-time defending tour champion pulled ahead at the start of the race and quickly built leads by as much as three seconds over Todd Szegedy.

Coby lost the lead just twice in the race. Once when Justin Bonsignore edged him by inches at the line on a restart and the other when he pitted during the second caution of the race and Ted Christopher took the lead by staying on the track.

Coby was able to get past Christopher on Lap 105 and stay out front the rest of way to pick up his eight career win at Stafford.

The race was slowed five times for caution with the only multi-car incident occurring on Lap 106 after Bonsignore and Ryan Preece got together during a restart.

The NASCAR Whelen Modified Tour returns to action on May 14 at New London-Waterford Speedbowl for the New England Cycle Center 161.