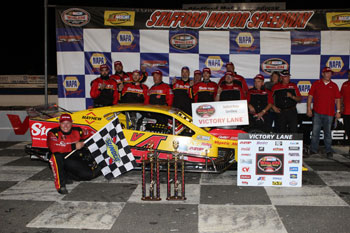 STAFFORD, Conn. – It was one of the most improbable of victories Friday night, but that didn’t make it any less sweet for Jimmy Blewett.

The 35-year-old from Howell, New Jersey, took advantage of fuel issues by NASCAR Whelen Modified Tour championship points leader Doug Coby and Bobby Santos in the closing laps to drive away with the 26th annual Stafford 150.

“You’ve got to put yourself in position,” said Blewett, who has collected four top three finishes in nine races in the No. 4 Starrett/Mayhew Dodge. “We worked all race long to be in position to be there in the end, to have a shot.”

Friday marked the sixth career win and first since 2009 for the long-time Modified driver. Blewett sat out of the NASCAR Whelen Modified Tour the last two years before getting an opportunity to drive for Bob Garbarino’s historic No. 4 Modified.

Coby won his sixth Coors Light Pole Award of the season Friday afternoon, and was trying to join Ted Christopher as the only driver to win four straight at Stafford. Christopher won the Fall Final in 2001 and the first three races of 2002.

Coby appeared well on his way Friday night as he led 140 of the first 143 laps.

But he suddenly slowed on the track, opening up the opportunity for the field to capitalize. Santos inherited the lead, but he too had fuel issues on the restart and the ensuing melee brought out the race’s final caution. It also pushed the race to 157 laps.

The late-race shakeup cut into Coby’s championship points lead. He now holds a 30-point edge on Bonsignore and 34 over Solomito. Blewett moved to fourth in points, 11 behind Solomito.