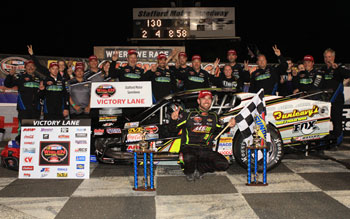 The 36-year-old from Milford, Connecticut, won his third straight NASCAR Whelen Modified Tour race Stafford Motor Speedway, the track there the three-time tour champion spent his early years racing, with yet another dominating effort. Coby led 129 of the 130 laps — pulling away on a green-white-checkered finish to claim the 26th Annual TSI Harley Davidson 125.

“Right now, our team is firing on all cylinders,” said Coby. “Everybody’s got to do their job, including me. And we did. That’s why we won.”

Jimmy Blewett scored his second straight finish with a runner-up, while Donny Lia, Eric Goodale and Justin Bonsignore rounded out the top five.

The win was the 19th of Coby’s career in 175 starts, tying him with Jerry Marquis and Todd Szegedy for eighth all-time on the Whelen Modified Tour. Coby has won five of the tour’s last seven races, dating back to last year. It’s a streak that covers the last three events at Stafford.

Dating back to his win in the NAPA Fall Final last October, Coby’s No. 2 Dunleavy Repair/A&J Romano Construction Chevrolet has led 367 of the last 375 laps on the half-mile.

“Not to screw up our car by making too many changes,” said Coby of what his team has learned in order to keep winning at Stafford. “We were great at the Fall Final and that was the first time we ran the car here. And we tweak it during practice, and we tweak before the race. The guys know, night race, what’s going to happen. Obviously I know this race track. They know this race track.

“The goal right now is not screw it up. It’s fast. It’s going to be a contender every time we come here.”

Only a pair of late cautions were able to slow Coby. The final came on Lap 123 and set up an overtime finish. Coby, however, was able to get away from the pack and roll to Victory Lane.

“I left the door open a couple times,” said Coby, “but the car just had great forward bite off Turn 2. I think that was the difference for us.”

Championship contender Timmy Solomito was caught up in a late race incident that dropped him from second to seventh in points. Coby stretched his lead to 24 over Bonsignore and 28 over Donny Lia. Just 10 points separate Lia from an eighth-place tie between Blewett and Bock.

The NASCAR Whelen Modified Tour is back on track on Wednesday, June 15, at Thompson (Connecticut) Speedway Motorsports Park.