Posted on November 2, 2018 by Scott Running Posted in News

(Stafford Springs, CT)—With the final checkered flag of the 2018 season displayed at the NAPA Auto Parts Fall Final, Ronnie Williams, Tom Fearn, Marcello Rufrano, Jeremy Lavoie, and George Bessette, Jr. have etched their names in the Stafford Speedway history books as 2018 track champions. Here we take a brief look back at each champion’s drive to their title success this season. 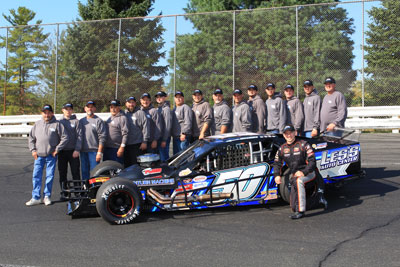 In the NASCAR Whelen All American Series Division I, SK Modifieds®, the fight for the championship was a season long duel between Williams and Keith Rocco. Rocco began the season with a 4-race winning streak that established himself as the championship favorite. Williams and the #50 Les’s Auto Center team were finishing races right behind Rocco on the podium, allowing him to keep the deficit to Rocco in the standings to a reasonable margin. A big win on June 29 in the NAPA SK 5K, with a payday of $10,625, was definitely the boost the #50 team needed as they pursued the race for the championship. Williams took the point lead for the first time following a win on July 6 and he led the standings for the remainder of the season and won his very first track championship at Stafford. For the season Williams posted 4 wins, 14 top-5 and 17 top-10 finishes. 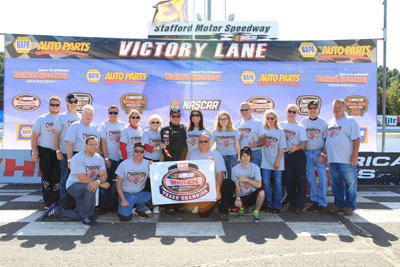 Tom Fearn and the #92 King Ward Coach Lines team enjoyed a season for the ages in the NWAAS Division II, Late Models. In 21 starts this season, Fearn finished on the podium 19 times with 12 wins, 6 second place finishes, and one third place finish. Fearn’s 12 wins this season set a Stafford Speedway Late Model division record and he also set a division record with six consecutive wins from May 18 to June 22. For the season Fearn posted 12 wins, 19 top-5 and 19 top-10 finishes with a miniscule average finish of 2.4. Fearn’s 12 wins this season also made him Stafford’s winningest driver in Late Model history with 48 career wins, passing Ryan Posocco who had 45 career Late Model wins at Stafford. 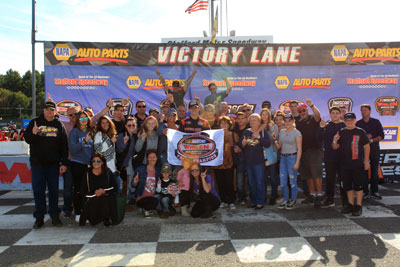 The NWAAS Division III, SK Light Modifieds, produced one of the tightest championship races in the track’s long and storied history. Marcello Rufrano and Bryan Narducci, two drivers who grew up racing against each other in the Stafford Wild Thing Kart Series, renewed their friendly rivalry in grand fashion this season. The two drivers took turns swapping the point lead back and forth this season with the pair combining to win 11 of 21 races. Rufrano took the checkered flag in the biggest SK Light race of the season, the May 25 Dunleavy’s Modifiedz Night extra distance race that paid an SK Light season high $2,025 with purse and contingency bonuses. Narducci looked to have the championship within his grasp late in the season, but two 15th place finishes in the 4 races leading into the season ending NAPA Fall Final allowed Rufrano to enter that race tied with Narducci in the standings. As the two were racing for the lead in the final race, they made contact and both drivers crashed out of the race. With Rufrano being in front of Narducci on the last completed green flag lap, he was scored one position ahead of Narducci and became the SK Light champion. For the season, Rufrano and the #88 Wheelers Auto Service team posted 6 wins, 11 top-5, and 16 top-10 finishes. 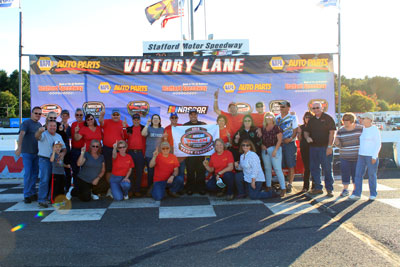 The NWAAS Division IV, Limited Late Model crown was dominated by Jeremy Lavoie and the #6 Aspen Hill Farm team. The season didn’t begin under the best of circumstances for Lavoie as a mechanical issue left him in last place in the season opening race. But Lavoie showed that he would be a force to be reckoned with this season with wins in four of the next five races after his mechanical issue, including a three-race winning streak. Lavoie would go on to record a second three race winning streak later in the season and he took control of the points race with a 6-race stretch from June 29 to August 3 that saw him win 4 times and finish second twice. Lavoie clinched the championship with one race to go and for the season he posted 8 wins, 16 top-5, and 20 top-10 finishes. 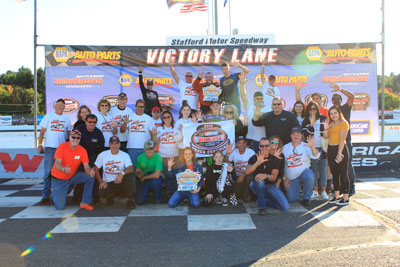 After finishing second in the NWAAS Division V Street Stock points as a rookie in 2017, George Bessette, Jr. and the #39 Lasco Roofing and Sheet Metal team returned to Stafford in 2018 as a championship favorite. Two of Bessette’s main rivals this year in the championship race were Meghan Fuller, daughter of former Whelen Modified Tour champion Rick Fuller, and Brandon Michael. All three drivers each took a turn leading the points early in the season but Bessette went on an amazing run in the second half of the season to leave his closest pursuers in his rearview mirror and claim the championship. In the final 12 races of the season, Bessette notched up 11 podium finishes that included 4 wins, including a win in the extra distance R.A.D. Auto Machine Street Stock 30 that paid a Street Stock season high $575 with purse and contingency bonuses. Bessette’s consistency allowed him to clinch the championship with one race left to go but that didn’t slow him down as he won the season ending NAPA Fall Final feature event to close out his season in style. For the season Bessette posted 5 wins, 17 top-5 and 19 top-10 finishes.