(Stafford Springs, CT)—The 2018 Limited Late Model season at Stafford saw Jeremy Lavoie claim his first career track championship in dominating fashion. Let’s take a look at a few of the drivers who will be chasing Lavoie for the 2019 title.

#6 Jeremy Lavoie – The defending champion is back and looking to defend his title. After an 8-win season Lavoie will be poised to keep his crown with 2018 runner-up Ryan Fearn moving up to the Late Model division.

Ones to Watch
#12 Alexandra Fearn – With her brother moving up to Late Models in 2019, Alex remains in the Limited Late Models with hopes of improving on her 1 win in 2018. Fans should expect the #12 car in victory lane a few times this season. 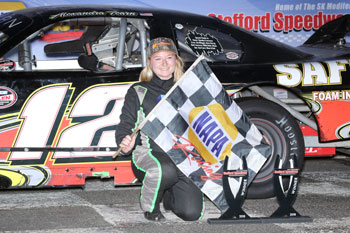 #59 Matt Clement – The #59 team returns to the Limited Late Model division in 2019 looking to grab that coveted first career win. After losing their first career win following a post race weight infraction last season, this team is hungrier than ever for that first win.

#22 Gary Patnode – Entering his 2nd full season in the Limited Late Model division, Patnode returns with his signature #22 car. After showing plenty of speed at the end of 2018, don’t be surprised to see Patnode in NAPA Victory Lane this season.

New Faces
#7 Kyle Casagrande – One of the most dominant Street Stock drivers in recent history, Kyle Casagrande is back at Stafford Speedway full-time in 2019. Running the same car that Andy Marchese ran in 2018, Casagrande will contend for wins in 2019.

Bottom Line
Lavoie is expected to continue his dominance but there are plenty of drivers itching to knock him off the top spot. Casagrande is expected to immediately contend for victories. Should be a fun battle between a good mix of drivers.