#01 Bryan Narducci – After losing the 2018 championship in a late race crash with eventual champion Marcello Rufrano, the #01 team is back looking for redemption. Coming off a 5-win season, Narducci is the heavy favorite for the 2019 championship.

#55 Teddy Hodgdon – Entering his 2nd season in the SK Light division, this Danbury, CT driver loves running the outside groove. After scoring his first career modified win last summer, this driver is hungry for more trophies. Expect the #55 to contend for the title.

#76 Mark Bakaj – Some may call it a comeback season but Mark Bakaj returned to Stafford’s SK Light Modified division in style, grabbing 2 wins and 14 top-5’s. Following a nearly 5-year hiatus from competition at Stafford, Bakaj should be a championship contender in the Paul French prepared car.

#7 Alexander Pearl – Momentum is a big part of racing and Pearl has it after winning his first career Stafford feature at the NAPA Fall Final. This team has big confidence rolling into 2019. This smooth, calculated driver should contend for the title. 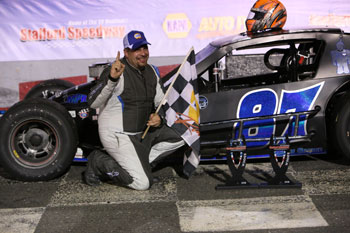 #87 Joey Ferrigno – Following an up and down 2018 that included 1 win but too many DNF’s to count, this veteran is looking to bounce back and make a few more stops in NAPA Victory Lane.

#22 Wesley Prucker – Another driver that couldn’t catch a break in 2018. The Stafford, CT native is back for a fresh start on a new season. After grabbing his first career win in 2017, Prucker knows what victory lane tastes like, and of course he wants more.

#54 Mikey Flynn – Due for a win, due for a breakout season. Entering his 2nd season in Stafford’s SK Light division this driver could easily grab a win or two in his signature green #54 car.

#8 Norm Sears – Stafford Speedway veteran with 3 Street Stock track championships to his name. Sears has been learning the ropes of piloting an open wheel car for the past 2 seasons. With a lot of laps around the half-mile, this team could click off some good finishes.

New Faces
#14 Steven Chapman – Wild Thing Kart graduate and Ellington, CT native, this youngster is set for his first full season at Stafford. After making 5 starts in 2018 this driver has shown he’s not afraid to be aggressive. Watch this team in 2019.

#31 Noah Korner – One of the highly anticipated rookies, Korner is a talented driver with a lot of experience in Legend cars. Korner will team with his brother Glenn, who competed for a full season at Stafford in 2017. Don’t be surprised if the #31 notches a win in 2019.

#37 Chris Bagnall – Moving up from the Street Stock division, Bagnall is one of many rookies preparing for the 2019 SK Light season.

#57 Jonathan Puleo – Another driver who competed at the Waterford Speedbowl in 2018. Puleo has 1 career start at Stafford which resulted in a top 10 finish. Can the 2018 Speedbowl track champion translate his success to the big Stafford half-mile?

Bottom Line
Major competition and a lot of new faces will be the story for the SK Light division in 2019. 47 teams have pre-registered for the new season including 11 rookies. Expect more of the same as 2018, big packs and tight racing.