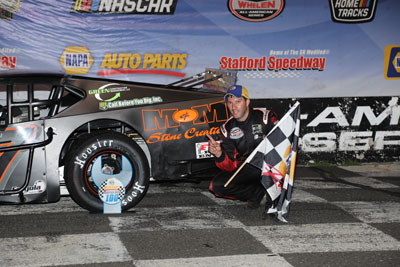 In the NAPA Auto Parts Open Modified 100, Michael Christopher, Jr. took the lead at the drop of the green flag with Tommy Barrett, Jr. and Craig Lutz behind him.  Matt Galko and Anthony Nocella were side by side for fourth but Galko took third on lap-4.  Ronnie Williams was on the charge in the early going, moving up to fourth behind Galko with Nocella fifth as Christopher and Barrett continued to head the field.

With 10 laps in the books, it was still Christopher and Barrett leading the field.  Galko was third with Keith Rocco now up to fourth and Williams was fifth.  Nocella was sixth in line followed by Joey Cipriano, Andrew Molleur, Matt Swanson, and Eric Goodale.  Charlie Pasteryak spun in turn 4 to bring the caution out with 15 laps complete.

Under the caution the lights went out and after a brief delay, racing resumed with Christopher taking the lead.  Rocco went around Barrett to take second on lap-16 while Galko and Nocella were side by side for fourth place behind Barrett.  Nocella took fourth on lap-18 with Williams going around Galko on lap-19 to move up to fifth.  Several cars, including Dave Etheridge, Pasteryak, Brad Van Houten, Calvin Carroll, and Anthony Flannery, came together in the turn 3 wall to bring the caution out with 19 laps complete.

Rocco nearly took the lead on the outside of Christopher but Christopher came back strong and was able to maintain the lead.  Several cars, including Jeff Gallup, Dylan Kopec, Joey Cipriano, and Carroll spun in turn 4 to bring the caution back out with 20 laps complete.

Christopher again took the lead with Nocella and Rocco side by side for second.  Galko was fourth in line followed by a side by side duel between Ronnie Silk and Williams for fifth.  Silk took the place on lap-22 and he then took fourth from Galko on lap-25.  Williams followed him by Galko to move into fifth and drop Galko back to sixth in line as Christopher was several car lengths in front of Rocco and Nocella.

Nocella made a move to take second from Rocco on lap-30 and Silk took third as Rocco fell back to fourth in line.  Williams was now on Rocco’s inside and he took fourth on lap-31 to drop Rocco back to fifth.  Rocco lost fifth place to Galko on lap-32 while Christopher was still out front.  Craig Lutz went by Galko on lap-38 to move into fifth while it was still Christopher, Nocella, Silk, and Williams making up the top-4.  Rocco spun coming out of turn 4 to bring the caution out with 47 laps complete.

Under the caution, the majority of lead lap cars all came to pit road for tires.  Lutz was the first car off pit road followed by Christopher, Galko, Silk, Williams, Nocella, Kopec, Cam McDermott, Andrew Molleur, and Todd Owen.  Eric Goodale stayed out and assumed the lead followed by Anthony Flannery, Jeff Gallup, and Lutz.

Silk was charging way to the front as he took third on lap-48, second on lap-49, and he took the lead on lap-50 before the caution flew for Cipriano, who spun in the middle of turns 3+4.

Silk took the lead back under green with Lutz and Christopher fighting side by side for second.  Galko was fourth followed by Swanson, Owen, and Van Houten.  Christopher won the battle with Lutz for second and now Silk, Christopher, and Lutz were lined up nose to tail in a 3-car train for the race lead.

Christopher made a move to the inside of Silk for the lead on lap-59 and he moved back to the front of the pack.  Lutz was still third with Swanson, Galko, Rocco, Owen, Barrett, Van Houten, and Gallup lined up behind him.

With 30 laps to go, Christopher and Silk were starting to pull away from Lutz in third, who had a large gap back to Swanson and Rocco in fourth and fifth.  Owen was sixth followed by Barrett, Van Houten, Gallup, and McDermott.  Kopec spun in turn 4 to bring the caution out with 72 laps complete.

Under the caution, Goodale came to pit road for a three tire change and he rejoined the race at the rear of the field.  Christopher and Silk ran side by side for a lap for the lead on the restart with Christopher getting clear on lap-73.  Lutz was third in line with Rocco fourth and Swanson in fifth.  Owen and Barrett were fighting side by side for sixth with Galko, Gallup, and McDermott making up the top-10.  Owen cleared Barrett on lap-78 but he lost sixth to Galko on lap-79.  The caution came out with 79 laps complete as Swanson spun in turn 2 and collected Nocella.

Silk powered his way around Christopher to take the lead on the restart but before he could get back to the start/finish line, Galko charged past both Silk and Christopher going into turn 3 to take the lead.  Rocco and and Silk were now side by side for second with Rocco getting clear on lap-83.  Christopher went by Silk to take third and drop Silk back to fourth.  McDermott was fifth and Goodale was back up to sixth with the freshest tires of the front runners.

Rocco pulled to the outside of Galko and took the lead by a nose at the line to complete lap-86.  Rocco cleared Galko on lap-87 with Christopher taking second.  Galko fell back to third with Silk fourth and Goodale now in fifth.

With 5 laps to go it was still Rocco out front followed by Christopher, Galko, Goodale, Silk, McDermott, Stephen Kopcik, Lutz, Barrett, and Gallup.  Rocco led the field to the checkered flag to win the NAPA Auto Parts Open 100.  Christopher finished second with Galko, Goodale, and Silk rounding out the top-5. 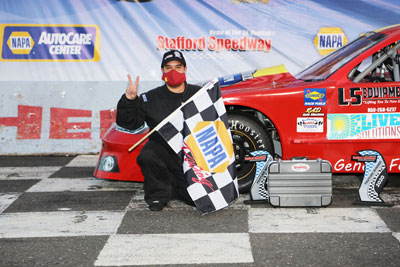 In the 20-lap Limited Late Model feature, Devon Jencik took the lead at the green flag and he led the first lap before giving way to Alexandra Fearn on lap-2.  Jencik settled into second with Jeremy Lavoie third Lucas Leone fourth, and Gary Patnode in fifth.

The order shuffled on lap-3 as Patnode got by Leone to take over fourth.  Patnode’s move opened the door for Andrew Durand to take fifth and Matt Clement to take sixth as Leone fell back to seventh.  Patnode got loose and spun through the frontstretch grass to bring the caution out with 4 laps complete.

With 5 laps to go, Lavoie was still in command of the race with Durand, Fearn, Clement, Patnode, and Leone still giving chase.  Durand got loose coming out of turn 2 on lap-18 and Fearn was able to take advantage and move into second place.

Fearn couldn’t get close enough to Lavoie to make a bid for the lead as Lavoie took down his second win of the 2020 season.  Durand finished third with Clement and Patnode rounding out the top-5. 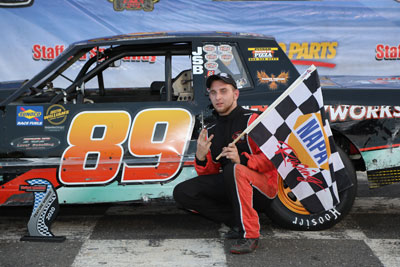 In the 20-lap Street Stock feature, George Yuska took the lead at the green flag with Nickolas Hovey, Chris Meyer, Adrien Paradis, III, and Larry Barnett lined up behind him.  The action up front really heated up on lap-5 as Yuska and Hovey went 3-wide to split the lapped car of Austin Hagander.  Yuska came out with the lead and Hovey remained in second but he lost second on lap-6 to Meyer.  The order continued to shuffle on lap-7 as Zack Robinson took fourth from Paradis and Meghan Fuller took fifth as Paradis slid from fourth back to sixth.

Meyer took the lead on lap-8 and that opened the door for Hovey, Robinson, and Fuller to all get by Yuska as he slid back to fifth.  The caution flew with 10 laps complete for a spin in turn 4 by Christopher Phelps.

Robinson powered his way into the lead on the restart with Meyer in second, Paradis third, and Fuller fourth.  Yuska and Fuller swapped fourth place back and forth between themselves on lap-12.  Tess Beyer was on the move and she took fourth from Fuller on lap-15 but lost that spot to Fuller on lap-16.

Robinson was starting to pull away from Meyer and the rest of the field with Paradis taking second from Meyer on lap-17.  Robinson led the field to the checkered flag to pick up his second points paying win and his third win of the 2020 season.  Paradis finished second with Meyer, Fuller, and Beyer rounding out the top-5.