(Stafford Springs, CT)—Stafford Speedway hosted the 3rd Annual Bud Light Open Modified 80 with tour style modifieds taking center stage for an 80-lap race around the Connecticut half-mile.  Stafford’s SK Lights and Street Stocks were also in feature action with Marcello Rufrano coming from 24th starting position out of 26 cars after having to qualify through the consi to win the Bud Light Open Mod 80 with a thrilling pass on Chase Dowling after a late restart.  In weekly racing action, Jon Puleo won the SK Light Modified feature and Zack Robinson won the Street Stock feature. 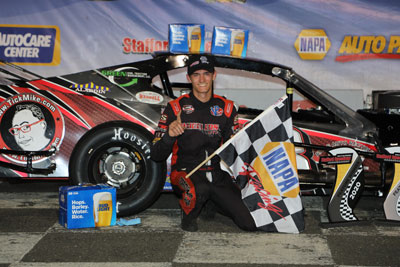 With 15 laps complete Dowling was still in command with Cipriano, Lutz, Gervais, and Nocella making up the top-5.  Eric Goodale was up to sixth with Galko, Charlie Pasteryak, Ronnie Williams, and Dave Etheridge making up the bottom half of the top-10.

With 30 laps complete the order at the front of the field remained unchanged with Dowling setting the pace followed by Cipriano, Lutz, Gervais, and Nocella.  Goodale was still sixth with Galko, Williams, Etheridge, and Pasteryak making up the top-10.

At the halfway point of the race, Dowling began to encounter lapped traffic, but it wasn’t slowing him down.  The caution came out with 41 laps complete for a spin in turn 2 by Tommy Barrett, Jr.  Under the caution Etheridge, Carl Medeiros, Jr., and Ryan Doucette all came to pit road before it was open to change tires.  One lap later the entire field except for Dana DiMatteo and Timmy Catalano came to pit road for a tire change.  Dowling won the race off pit road followed by Goodale, Lutz, Nocella, Gervais, Tommy Catalano, Williams, Cam McDermott, Pasteryak, and Jon McKennedy.

Lutz went side by side with Dowling for three laps after the restart for the lead before falling back into second place.  Goodale was third followed by Gervais, Tommy Catalano, Williams, McDermott, McKennedy, Andrew Molleur, and Nocella.

With 15 laps to go, Dowling was still in command of the race with Lutz, Goodale, Gervais, Williams, McDermott, McKennedy, Molleur, Cipriano, and Marcello Rufrano giving chase.  The caution came out with 72 laps complete for a spin in the middle of turns 3+4 by Tommy Catalano, setting up an 8-lap dash to the finish.

McKennedy and Williams spun in turn 2 to bring the caution right back out.  Dowling took the lead on the restart with Lutz and Goodale locked in a duel for second.  Rufrano charged up to fourth and took third from Goodale before the caution came back out with 73 laps complete for a spin by Kevin Iannarelli.

Dowling took the lead back under green with Rufrano taking second.  Cipriano was third in line followed by Goodale, DiMatteo, Galko, Nocella, and McDermott.  Rufrano was closing in on Dowling’s back bumper when the caution came back out with 76 laps complete for spins on the backstretch by McDermott and Pasteryak.

Rufrano charged by Dowling on the restart to take over the lead.  Cipriano came up to second with Dowling sliding back to third before the caution came back out with 78 laps complete for spins by Pasteryak and Dan Meservey, Jr.

Rufrano took the lead with Dowling and Cipriano side by side for second.  Dowling cleared Cipriano coming to the white flag but he couldn’t catch Rufrano as Rufrano won his very first Tour type Modified feature event.  Cipriano finished third with Goodale and Lutz rounding out the top-5. 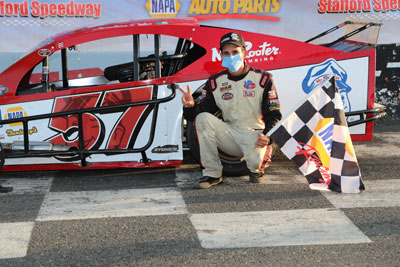 In the 30-lap SK Light feature event, Robert Bloxsom, III took the lead at the green flag but Norm Sears went by Bloxsom on lap-2 to take over the lead.  George Bessette, Jr. slotted into second with Jon Puleo third and Bloxsom back to fourth when the caution came out with 2 laps complete for spins on the frontstretch by Tyler Chapman and Ethan Durocher.

Sears took the lead on the restart with Puleo and Bessette locked in a side by side duel for second.  On lap-5 Puleo nearly went 3 wide with Sears and Bessette to move into the lead.  Sears came out in second with Bessette in third.  Just behind the lead trio was Joey Ferrigno in fourth and Derek Debbis took fifth place from Bloxsom on lap-7.

The caution flew with 11 laps complete for spins in turn 2 by Nicole Chambrello , Todd Taylor, and Matt McDougall with Puleo still in command over Sears, Bessette, Debbis and Ferrigno.

Puleo resumed his place at the front of the pack on the restart with Sears in second and Debbis moving up to third.  Debbis took second from Sears on lap-14 while Charlie McDougall worked his way into fourth with Bessette rounding out the top-5 behind Puleo and Debbis.  The caution came back out with 21 laps complete for a spin by Wesley Prucker coming out of turn 2.

Puleo took the lead on the green flag with Debbis holding off Sears to maintain second.  Bessette was fourth in line with Steven Chapman up to fifth and Charlie McDougall back to sixth.

Puleo led Debbis to the checkered flag to take the win.  Sears finished third with Bessette and Charlie McDougall rounding out the top-5. 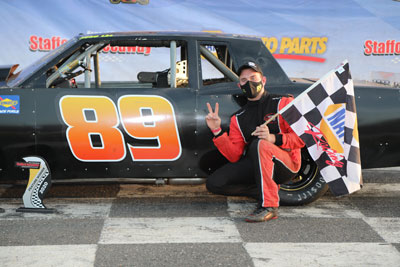 In the 20-lap Street Stock feature event, Adrien Paradis, III took the lead at the drop of the green flag with Zack Robinson in second.  Al Stone, III was third with George Yuska fourth and Meghan Fuller fifth.  Robinson took the lead from Paradis on lap-2 and Stone moved by Paradis to take second place on lap-4.  Stone’s move opened the door for Fuller to follow him by and drop Paradis back to fourth with Chris Meyer in fifth as Robinson was starting to pull away from the field.  The caution came out with 8 laps complete for a spin by Jason Finkbein in turn 4.

Robinson took the lead on the restart with Fuller taking second.  Stone was third in line with Meyer right behind him in fourth and Paradis was fifth.  Shawn Monahan was up to sixth with Nickolas Hovey in seventh.

Unlike earlier, Fuller was able to keep pace with Robinson and she was starting to apply pressure for the race lead.  Robinson and Fuller were pulling away from Stone in third with Meyer and Paradis several car lengths behind Stone.  Fuller was looking high and low but Robinson was able to hold her off with 5 laps to go.

Fuller stayed glued to Robinson’s back bumper but she couldn’t find a way around as Robinson took down the victory.  Stone finished third with Meyer and Paradis rounding out the top-5.