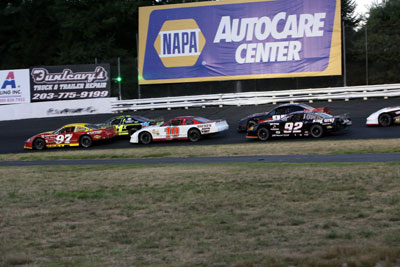 (Stafford Springs, CT)—The Inaugural Call Before You Dig Pro Late Model 81 scheduled for Saturday August 22 at Stafford Speedway is a little more than a week away from taking the green flag.  Stafford weekly Late Model driver Adam Gray, who is currently leading the Late Model points standings in the #97 Meadows Motor Car team and is a 2-time Late Model track champion, will be looking to use his Stafford experience to his advantage in the CBYD Pro Late Model 81.

“To me it’s one of those things that I have experience at Stafford and Stafford is a track that obviously experience definitely helps,” said Gray.  “We have a good car and I think we can be right there in the ballpark.”

The field for the CBYD Pro Late Model 81 is filled with drivers who are either former or current weekly drivers at Stafford.  Several of the experienced drivers are from the open wheel modified ranks, but despite this fact Gray thinks that those drivers won’t be at any disadvantage at all.

“I think having experience at Stafford gives you a leg up because it’s definitely a funky layout,” said Gray.  “Out of the guys who have experience at Stafford half of them are full fender guys and half are open wheel guys.  The Pro Late Model car is a little closer to the modified cars with the suspension and chassis where it won’t be as big of a learning curve for those guys as for someone who has never driven a ProStock car or has just driven a Stafford Late Model.”

Despite having 2 track championships and 16 feature wins and counting to his name at Stafford, Gray says that there isn’t much that he will be able to carry over from his weekly #97 Late Model to his #97 Pro Late Model car. 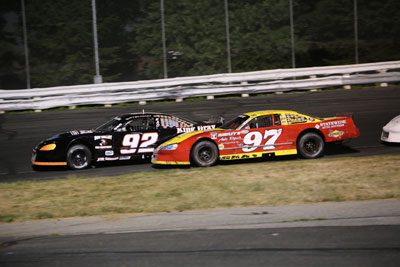 “The two cars are not even close,” said Gray.  “The Pro Late Model car has more power, wider tires, and it’s a full fabricated chassis.  They drive better, they stop better, and they have more power.  We have a good starting base to work off of with our weekly Late Model car and we’ll definitely have to contend with all of the other guys who have experience at Stafford like Mike O’Sullivan and Tom Fearn.  All in all, I think the fans are going to be in for an exciting show.”

Normally Gray and the Late Model field at Stafford runs 30 laps every Friday night.  With 81 laps on tap, Gray says that not overdriving the car in the beginning of the race will be one of the keys to winning the race.

“The last couple years I’ve driven some longer races, so I do have some long distance experience,” said Gray.  “Last year we ran the Oxford 250 and I ran a 250 lap race at White Mountain.  The biggest thing will be trying to prepare yourself to not use the car or the tires up in the beginning of the race so you can do what you need to do at the end of the race.  In order to win this race, it’s going to take patience, staying out of trouble, and being there at the end to win the race.  Kind of the same things you need to win a 30-lap race on a Friday nights.”

Another aspect to winning the race will be tire strategy.  Pro Late Model teams must declare up to 6 tires for qualifying and the race, allowing for 2 tires to be changed during the race.  While fresh tires could make all the difference for a driver if they’re able to pit and change tires at the right time, Gray thinks you might not see anyone changing tires. 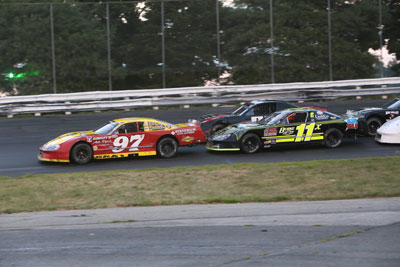 In addition to the CBYD Pro Late Model 81, Gray will be looking to maintain the excellent start he has gotten off to in Stafford’s weekly Late Model ranks.  Gray opened the season with back to back fifth place finishes and he is currently riding a 2-race winning streak that has seen him ascend to the points lead.

“I feel like we’re back in the ball park where we were when we last ran every week and this was the time that we usually started showing our success,” said Gray.  “We’ve been getting around 20 cars every week and out of those 20 cars I think there’s 15 that can win on any given night with the right circumstances, I’ve just been the lucky driver to win the last couple weeks.”

Fans who cannot attend the race in person but would still like to watch the race can order a live stream of the event from www.staffordspeedway.tv.  Fans can purchase the Call Before You Dig Pro Late Model 81 event for $30 or they can purchase a combination deal for the CBYD Pro Late Model 81 along with the Lincoln Tech Open Modified 80 on Friday, August 21 for $45 with a portion of each purchase going back to the drivers at the end of the season.