Posted on October 1, 2020 by Scott Running Posted in News

Coury won the first race of the season with Saunders winning the second race to take over the points lead.  Gray didn’t win until the fourth race of the season but he leads all drivers with 5 wins in 12 starts.  Gray had built up a comfortable lead in the standings but an 18th place finish on Sept. 4 and a 13th place finish last Friday night has seen most of Gray’s lead slowly erode from 28 points to only 4 points. 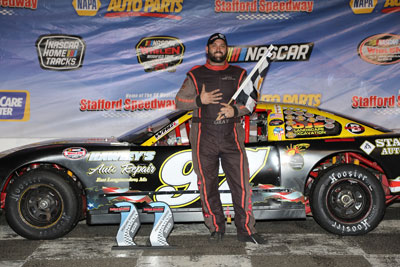 “We’ve had a pretty phenomenal season so far,” said Gray.  “We’ve had a couple of bad nights but we’re still on top of the points so hopefully we can capitalize on that the rest of the season.  We started off with this season supposed to be a part-time deal.  The one race that we were planning on missing because my father was racing happened to rain out so we decided to go full-time.  We have no complaints this year, we’re going out and having fun and doing what we love to do.”

“I think we haven’t met our expectations for this season because we haven’t visited victory lane yet,” said Bennett.  “The ultimate goal is to win races and finish on the podium week in and week out and if you can do that, the points usually take care of themselves.  I’d say that we’re happy to be in the position that we are with 2 races to go to be in the championship hunt.  It’s somewhat disappointing that we haven’t won yet but we’re grateful that our consistency and finishes have given us an opportunity to become champions at the end of the season.” 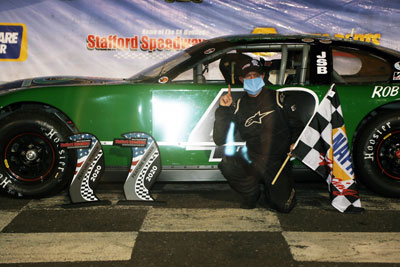 “I’m pretty happy with how the season has gone so far,” said Saunders.  “We don’t have as many podiums and top-5 finsihes as last year but the competition this year has been way tougher than it was last year.  Other than our 1 DNF this year, our worst finish has been a 6th so it’s been a great season.”

“We had pretty high expectations coming into this season because we’ve been competitive at Stafford most times that we’ve showed up,” said Coury.  “We didn’t expect to run full-time but with how this season shook out with a shortened schedule we decided to run full time because we felt like this might be the only year that we could run full-time.  We’re pretty happy with how things have gone for us.  Knowing now that we’re still mathematically eligible to win the championship, I’m a little disappointed with some of our bad finishes during the summer but overall we’re very happy.”

With each of the 4 contenders having at least one finish outside the top-10, they are all aware that anything can happen over the final 2 races and any one of them could take home the championship at the end of the season.  With Coury being 34 points behind, he knows he has to go for wins while the other 3 contenders have to strike a balance somewhere in between aggressive and conservative.

“Any time you have a mechanical malfunction like we did last Friday when our alternator wire shorted out is disheartening,” said Gray.  “But that’s more or less made us re-dot all of our i’s and cross of all of our t’s to make sure we don’t have another mechanical issue like that in the final 2 races.  To be 100% honest, I’m not even looking at the points standings.  We’re coming out to have fun and winning races is having fun.  If we can continue doing what we’ve been doing all year long then the rest will fall where it falls.  We’re coming to the track looking for wins.”

“The 2 championships that I’ve won as a driver I wrapped them up early so I haven’t been in a situation like this before,” said Bennett.  “I think the pressure is on Adam and his team because they’ve had a couple of bad runs the last few weeks where we’ve been behind all year and still trying to win our first race.  If we can win we get the most points and the standings will take care of itself.  We still haven’t found what we’re looking for.  We’ll be coming to the track with another new chassis setup this Friday looking for something to get us over that last hump.  Hopefully we’ll be able to hit on something with 2 races left to go.  It seems like this year and last year the car has been better in the cooler weather so hopefully we can take advantage of that.”

“We just have to keep on doing what we’ve been doing all year,” said Saunders.  “I think Adam is going to be tough to catch, he’s probably going to have to make a mistake for us to catch him.  There’s been races this year where all of us who are in the top-5 in the standings have either gained or lost 20 points in one race so it’s still doable and it’s anyone’s chance to win the championship.  If I get too aggressive and take myself out of a race, Wayne Coury can pass us in the standings so it’s a little bit about protecting what we have versus attacking a little bit more and seeing if we can get a little more.  The margin is only 8 points, which is 4 positions on the track.  I have to be aggressive but I also have to be aware of the percentage of making a move work or not. 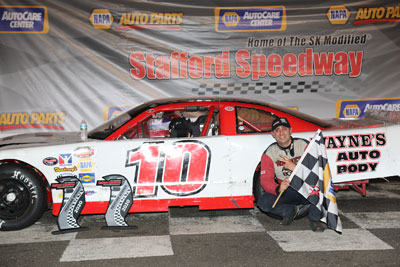 “We know it’s a long shot for us so all we can do is try to win the next two races and let the points fall where they may,” said Coury.  “We’d had loved to be a little closer at this point but we’re happy where we are and I’d be real happy if we can get another win and at least have two more strong runs to finish the season.”

The race for the Late Model championship continues this Friday, October 2nd with a Stafford Weekly Racing program Presented by All Phases Renovations.  Tickets for this race are on sale now through the Stafford Speedway website with adult general admission priced at $20.00, $5.00 for kids ages 6-14, kids 5 and under are admitted free.  Paddock passes are priced at $40.00.  The 2020 points race will conclude next Friday, October 9 with NAPA Auto Parts Championship Night.