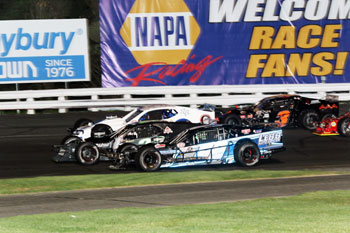 (Stafford Springs, CT)—For the 6th consecutive season, John Rufrano from Wheelers Auto Service of Hamden, CT will provide a heat race bonus for this Saturday’s NAPA SK 5k event.  Rufrano will post a $500 bonus for each heat race with winners banking $250, second place $150, and third place $100.  The $2,000 in heat race contingency, when combined with the race purse and other contingency awards, pushes the total posted awards for the 7th Annual NAPA SK 5k to nearly $30,000.

“Racing is expensive, so every little bit helps out because you pretty much give back whatever you win,” said Rufrano. “With the qualifying heats, sometimes the guys who finish up front aren’t the guys who finish up front every week in the races so the money has a better chance of going to guys who don’t win contingency every week.  It also helps make the heat races a little more exciting by giving the drivers something to race for.”

Rufrano fields two SK Modified® cars on a weekly basis, the #48 for his son Marcello, the 2018 SK Light champion, and the #88 for 3-time SK Modified® champion Keith Rocco.  Rufrano is coming off of what many would consider to be an upset victory in the July 18th Bud Light Open 80 at Stafford and he had his best SK Modified® finish of the season last week with a 5th place effort.  Rocco has competed in all 6 NAPA SK 5k’s run to date and he has the best average finish of any driver in NAPA SK 5k history at 3.7.  Rocco has finished second in the NAPA SK 5k three times, including twice in a row behind Ronnie Williams.  Rocco won the first 2 races of the 2020 season and heads into the NAPA SK 5k as the points leader.  With momentum and experience on the Wheelers Auto team’s side, Rufrano is ready to capture a victory in this year’s edition of the NAPA SK 5k. 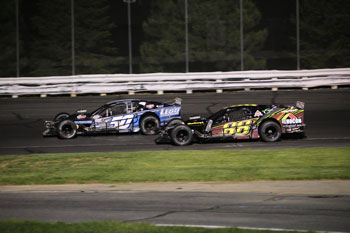 “We’re hoping one of them can win the race this year,” said Rufrano.  “Marcello is certainly capable of pulling off an upset win and anything is possible with him behind the wheel.  Keith has finished second many times in this race so he’s kind of like Dale Earnhardt, how many years did it take him to win the Daytona 500.  Keith is hungry for a win in this race and I think we have good 100 lap cars for both drivers.”

The 7th Annual NAPA Auto Parts SK 5K is set for this Saturday, August 8.  Tickets for the NAPA SK 5K are available and on sale now through the Stafford Speedway website.  Tickets are priced at $30.00 for adult general admission tickets, $10.00 for kids ages 6-14, kids 5 and under are admitted free of charge when accompanied by an adult, and paddock passes are priced at $50.00.  Stafford Speedway is limited to 25% capacity and there are still a limited number of tickets available for purchase.

Fans who cannot attend the race in person but would still like to watch the race can order a live stream of the event from www.staffordspeedway.tv.  Fans can purchase the NAPA SK 5k event for $30 or there is a combination deal that includes the Friday, August 7 NAPA Auto Parts Open Modified 100 as well as the NAPA SK 5k on Saturday for $45.