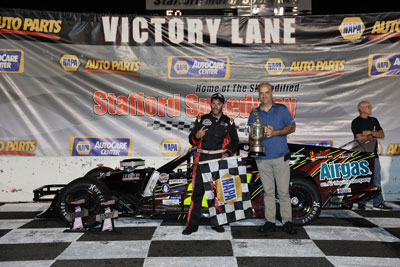 In the 50-lap North American Motor Car Senator’s Cup SK Modified® feature, Teddy Hodgdon took the lead at the green flag with Jon Puleo behind him in second.  Bryan Narducci was third followed by Andrew Molleur and Keith Rocco when the first caution came out with 4 laps complete for a spin by David Arute on the frontstretch.

Hodgdon took the lead on the restart with Puleo still in second.  Narducci and Molleur were side by side for third place with Keith Rocco up to fifth.  Hines took fifth from Molleur on lap-11 as Hodgdon continued to hold the lead with Puleo, Rocco, and Narducci behind him.  The caution came back out with 13 laps complete for a spin by Tyler Leary.  Danny Cates was black flagged to the rear of the field for making contact with Leary.

Hodgdon maintained the lead on the restart with Rocco working his way into second.  Hines made a move to the inside of Puleo to take third on lap-15 with Narducci holding down the fifth position.  Rocco got around Hodgdon to take over the race lead on lap-17 while Narducci got out of shape but made a nice save on the backstretch and he only fell back to eighth place.

With 20 laps complete, the order was Rocco, Hodgdon, Hines, Puleo, and Stephen Kopcik making up the top-5.  Molleur was sixth followed by Owen, Narducci, Dan Wesson, and Michael Gervais, Jr.  Hines made a move to the inside of Hodgdon on lap-24 and he was able to take over second place on lap-25.   The caution flag came back out with 27 laps complete for a spin by Dylan Kopec in turn 4.

Rocco took the lead on the restart with Hodgdon and Hines right behind him.  Kopcik moved up to fourth with Owen taking fifth.  Puleo faded back to sixth, with Molleur, Narducci, Wesson, and Arute making up the top-10.  Hines made a strong move to the inside of Hodgdon on lap-34 to move into second place.  Owen was now fourth with Kopcik back in fifth.  Hines’ good run came to an end with 38 laps complete as he appeared to lose an engine with a big plume of smoke pouring from underneath his car, which brought the caution flag back out.

Rocco took the lead with Owen falling into line in second.  Kopcik was third followed by Molleur and Hodgdon.  Puleo was sixth with Arute, Wesson, Mikey Flynn, and Michael Christopher, Jr. making up the top-10.  Owen was all over the back bumper of Rocco, looking for a way to make a pass for the lead.  After hounding Rocco for the lead for several laps Owen was finally able to get to Rocco’s inside but just as he made his move for the lead, the caution came out with 43 laps for a spin in turn 4 by Puleo, which put Rocco back in the lead with Owen in second for the restart.

Gervais spun in turn 3 on the restart to bring the caution right back out.  The next restart saw Rocco and Owen again take the top two spots with Kopcik and Molleur in third and fourth.  Wesson was fifth with Christopher up to sixth.  Rocco slipped up the track in turn 3 on lap-48, which gave Owen enough room to get to Rocco’s inside and take the lead by a nose at the line.

The two leaders ran side by side on lap-49 with Owen on the outside of Rocco and holding the lead by a nose.  The two leaders ran the final lap side by side with Rocco able to edge in front of Owen coming off turn 4 and he took the checkered flag to pick up his second win of the 2021 season.  Owen finished second with Kopcik, Molleur, and Wesson rounding out the top-5. 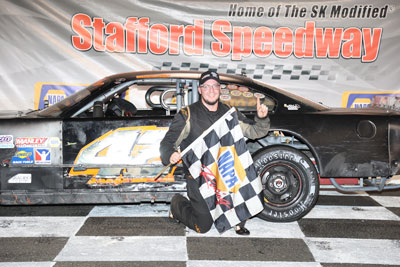 In the 30-lap Late Model feature, John Blake led the field to the green and he took the early lead at the green flag.  Michael Wray and Paul Arute were side by side for second with Wray taking second on lap-2.  Tom Fearn took third and Adam Gray took fourth as Arute slipped back to fifth in line.  Just behind Arute were Michael Bennett and Darrell Keane with Andrew Molleur, Zack Robinson, and Wayne Coury, Jr. rounding out the top-10.

Wray made a move to the inside of Blake coming out of turn 4 on lap-5 and he took the lead at the line.  Fearn took second with Gray taking third as Blake fell back to fourth.  Bennett was up to fifth with Arute right behind him in sixth place.  Bennett took fourth from Blake on lap-8 while Fearn was starting to look for a way around Wray to take over the race lead.  Keane’s car dropped off the pace with smoke pouring from the car and that brought the caution out with 14 laps complete.

Wray took the lead on the restart with Gray and Fearn side by side for second.  Bennett was fourth with Blake in fifth.  Just behind Blake, Molleur and Arute were side by side for sixth.  Tyler Leary and  Tom Butler got together on the backstretch with Leary spinning to bring the caution back out with 16 laps complete. 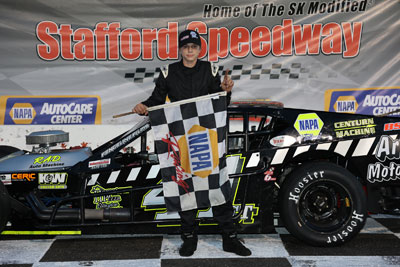 In the 20-lap SK Light feature, Tyler Chapman took the lead at the green flag with Chris Matthews taking second.  Steven Chapman and Amanda West were side by side for third with Alexander Pearl and Tyler Barry right behind them.  Steven Chapman moved into second on lap-3 with Pearl and Barry taking third and fourth on lap-4 with Matthews sliding back to fifth place.

Pearl took second from Steven Chapman on lap-7 as Tyler Chapman continued to hold the race lead.  Barry was still fourth in line but Bob Charland was now up to fifth as Matthews fell back to ninth place.  Barry was starting to apply heavy pressure to Steven Chapman for third but Chapman was able to fend off his challenges.  Brian Sullivan got around Charland to move into fifth place on lap-11 and Charland would lose sixth place to George Bessette, Jr. on lap-14.

Barry was able to pull alongside Steven Chapman on lap-15 in the fight for third but Chapman was again able to hold him off and maintain third place as Tyler Chapman and Pearl continued to lead the race.  Tyler Chapman led Pearl to the checkered flag to pick up his second win of the 2021 season.  Steven Chapman held off Barry for third with Sullivan rounding out the top-5. 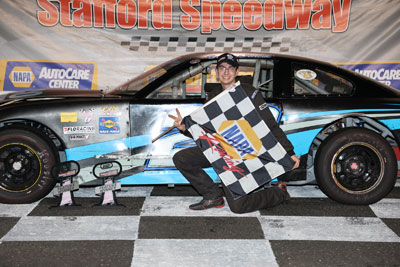 In the 20-lap Limited Late Model feature, R.J. Surdell took the early lead with Matt Scappini in second.  The caution came out with 2 laps complete for Kevin Crosby, who got into the backstretch wall but was able to continue in the race.

Back under green, Surdell took the lead with Scappini in second.  Palardy and Gary Patnode were side by side for third with Devon Jencik in fifth place.  Patnode took third on lap-4 with Palardy moving up to fourth.  Palardy spun in turn 2 to bring the caution out with 5 laps complete, just after he had moved up to fourth.

Surdell took the lead back under green with Patnode taking second.  Jencik moved up to third with Jeremy Lavoie charging into fourth and Alexandra Fearn taking fifth.  Fearn made a move to the inside of Lavoie and she took fourth on lap-8.  Ari Jencik spun on the frontstretch to bring the caution back out with 8 laps complete.

Jencik again held the lead by a nose ot complete lap-18 but Lavoie was able to complete the pass on lap-19 as the cars headed down the backstretch and into turn 3.  Patnode spun in turn 1 and collected Fearn on the final lap but up front, Jencik got back to the inside of Lavoie and the two cars ran side by side through turns 3+4 with Jencik winning the race to the checkered flag to pick up his second win of the 2021 season.  Rich Hammann finished third behind Jencik and Lavoie with Matt Clement and Surdell rounding out the top-5. 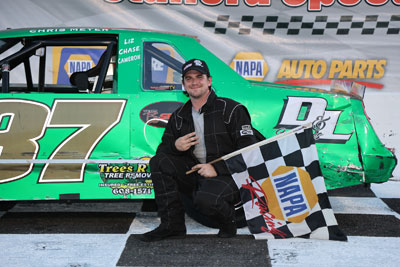 In the 20-lap Street Stock feature, Bobby Stirk, III took the lead at the green and he began to set the early pace with Jason Finkbein in second.  Travis Downey was third with Jeremy Washburn fourth and Adrien Paradis, III in fifth.  Paradis took fourth fronm Washburn on lap-4 and he brought Chris Meyer Travis Hydar, Frank L’Etoile, Jr., and several others with him as Washburn fell back outside the top-10.  Washburn then got out of shape in turn 4 and he spun to bring the caution out with 4 laps complete.

Stirk and Finkbein went side by side for the lead back under green with Paradis in third and Meyer and Hydar were side by side for fourth just in front of L’Etoile.  Stirk got clear into the lead on lap-7 and Paradis took second from Finkbein on lap-8.  Meyer followed Paradis by Finkbein to move into third with Hydar in fifth and L’Etoile sixth.

Stirk took the lead on on the restart and he held the lead until Paradis went to the front on lap-12 with Meyer coming up to second.  L’Etoile took third with Hydar taking fourth as Stirk slipped back to fifth in line.  This was the running order when the caution came back out with 16 laps complete for spins by Alexander Fuller and Daltin McCarthy coming out of turn 4.

Meyer took the lead on the restart with L’Etoile moving up to second.  Hydar was third followed by Stirk, Bert Ouellette, Tyler Trott, and Paradis.  L’Etoile couldn’t get close enough to Meyer to make a bid for the lead as Meyer scored his third win of the 2021 season.  Hydar finished third with Stirk and Ouellette rounding out the top-5.