Posted on August 21, 2021 by Scott Running Posted in News

(Stafford Springs, CT)—Stafford Speedway hosted another round of Stafford Weekly Racing on Friday, August 20th with Open Modified cars on hand for the Lincoln Tech Open 80.  Andrew Molleur picked up his first win of the season in the SK Modified® feature, Michael Bennett took down his fourth win of 2021 in the Late Model feature, George Bessette, Jr. scored his second win of the season in the SK Light feature, Devon Jencik notched his third win of 2021 in the Limited Late Model feature, and Travis Hydar scored his third win of the year in the Street Stock feature.

In the 40-lap SK Modified® feature event, Teddy Hodgdon led the first lap but David Arute took over the lead on lap-2.  Noah Korner took second from Hodgdon on lap-3 and Hodgdon would continue to slide backwards as Tyler Hines took third, Andrew Molleur fourth and Michael Christopher, Jr., fifth.  Hodgdon was finally able to get back in line in seventh place behind Bryan Narducci.

Korner made a move to the inside of Arute on lap-9 and he took the lead by a nose at the line.  Molleur took second and Hines third as Arute was now side by side with Christopher for fourth on lap-10.  Dylan Kopec spun in turn 4 to bring the caution out with 10 laps complete.

Molleur took the lead on the restart with Korner, Hines, Arute, and Christopher lined up behind him.  Korner made a strong move to the inside of Molleur on lap-14 but wasn’t able to complete the pass.  Hines was still third in line with Arute, Christopher, and Narducci right behind him.

At the halfway point, Molleur was still in the lead with Korner, Hines, Arute, Christopher, Narducci, Todd Owen, Michael Gervais, Jr., Jon Puleo, and Stephen Kopcik making up the top-10 behind him.  Hines and Korner touched on lap-30 with Hines slowly pulling his car behind the wall on pit road and Korner continuing on in second place.  Christopher was now up to third with Owen fourth and Narducci in fifth as Arute fell back to sixth.

Molleur led Korner and the field to the checkered flag to pick up his first win of the 2021 season.  Christopher finished third with Owen and Narducci rounding out the top-5. 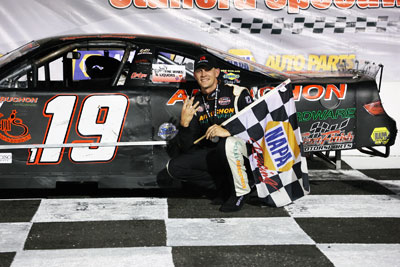 In the 30-lap Late Model feature event, Tom Butler took the lead at the green flag with Paul Arute and Michael Bennett going side by side for second.  Bennett took second on lap-2 with Tom Fearn taking third from Arute on lap-3.  Wayne Coury, Jr. also got by Arute to take fourth on lap-3 which dropped Arute back to fifth place, just in front of Paul Varricchio, Jr., Adam Gray, Andrew Molleur, Michael Wray, and Al Saunders.

Bennett took the lead from Butler on lap-5 with Fearn and Coury following him by Butler to move into second and third and drop Butler back to fourth in front of Arute, who was still fifth.  Zack Robinson and Cliff Saunders spun in turn 2 to bring the caution out with 6 laps complete.

Fearn streaked into the lead on the restart but it was called back by Stafford officials.  The second restart attempt saw Bennett take the lead with Coury moving up to second.  Fearn slotted into third with Arute taking fourth from Butler on lap-8.  Molleur took fifth from Butler on lap-9 and Wray followed him through to take sixth and drop Butler back to seventh place.

Coury was all over the back bumper of Fearn in the battle for second but he couldn’t find a way to get around.  Bennett was starting to pull away from the Fearn-Coury duo with Arute, Molleur, Kevin Gambacorta, Wray, and Gray all closing in on Fearn and Coury.  Gambacorta moved into fifth on lap-19 and Gray followed him by Wray to take sixth.  Molleur then made a move to get by Wray on lap-21 to take over seventh place and Tyler Leary followed him through to take eighth and drop Wray back to ninth place.

Gambacorta took fourth from Arute and Gray took fifth to drop Arute back to sixth in line with 5 laps remaining in the race and Bennett continuing to stretch out his lead over the field.  Bennett led the field to the checkered flag to pick up his fourth win of the 2021 season.  Gambacorta finished second with Gray, Coury, and Fearn rounding out the top-5. 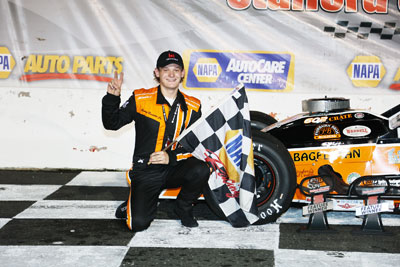 In the 20-lap SK Light feature event, Peter Bennett led the first lap but Norm Sears took the lead on lap-2.  George Bessette, Jr. followed Sears by Bennett to take second with Steven Chapman, Tyler Barry, and Brian Sullivan all getting by Bennett as Bennett fell back to eighth in line.  Bessette took the lead from Sears on lap-5 before Barry spun and took a hard hit into the turn 2 wall to bring the red and yellow flags out with 5 laps complete.

Back under green Bessette maintained the race lead followed by Steven Chapman, Bob Charland, Sears, and Sullivan.  Sullivan and Sears touched wheels in turn 3 which sent Sears around brought the caution back out with 7 laps complete.  Sullivan was sent to the rear of the field by Stafford officials for the contact with Sears.

Bessette again took the lead with Debbis going to the outside of Charland in a fight for second.  Tyler Chapman was fourth with his brother Steven right behind him in fifth.  Debbis took second from Charland on lap-12 and began to set his sights on Bessette for the race lead.  Charland was applying heavy pressure to Debbis for second but he wasn’t able to complete a pass after getting to the inside of Debbis several times.

Debbis came up short of Bessette as they navigated their way through two lapped cars on the final lap with Bessette taking his second win of the 2021 season.  Charland finished third with Tyler and Steven Chapman rounding out the top-5. 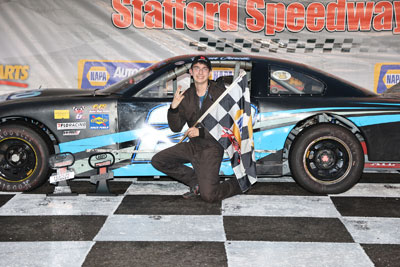 In the 20-lap Limited Late Model feature event, Matt Scappini led the field to the green and he set he early pace at the drop fo the green flag.  Matt Clement was second in line with Alexandra Fearn quickly working her way up to fourth place behind Gary Patnode.  Clement took the lead from Scappini on lap-4 while Fearn got by Patnode to move into third place.  With 8 laps complete, Clement held the lead with Scappini and Fearn right behind him.  Devon Jencik was up to fourth with Rich Hammann in fifth as Patnode slid back to seventh place behind Jeremy Lavoie in sixth.

Fearn made a move to take second place from Scappini on lap-10 with Jencik taking third.  Hammann followed suit and he moved into fourth on lap-11 and Lavoie took fifth as Scappini fell from second back to sixth in line.  The caution came out with 12 laps complete for a sprinkle of rain that appeared over the track.

Clement staved off a challenge from Fearn on the restart to maintain the lead.  Jencik and Fearn were now side by side for second with Lavoie in fourth and Patnode in fifth.  Jencik took second on lap-15 with Fearn slotting into third with Clement out front.

Jencik pulled to the inside of Clement on lap-18 and he took over the lead.  Fearn was now side by side with Clement for second with Lavoie right behind them in fourth.  Fearn took second by a nose at the line as the field took the white flag and she got clear into second on the final lap but couldn’t catch Jencik as he took down his third win of the 2021 season.  Lavoie finished third with Clement and Patnode rounding out the top-5. 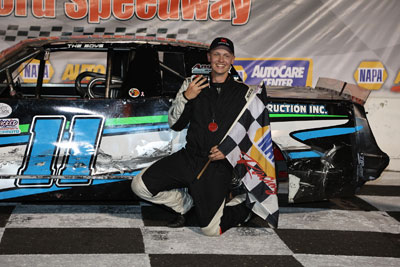 In the 20-lap Street Stock feature event, a multicar incident on the backstretch brought the yellow out before a lap could be completed.  Jason Finkbein took the lead on the start with Daltin McCarthy behind him in second.  Adrien Paradis, III spun in turn 1 to bring the caution back out with 1 lap complete.

Finkbein spun in turn 2 on the restart to bring the caution right back out.  Chris Danielczuk was black flagged to the rear of the field for making contact with Finkbein.

McCarthy took the lead on the restart with Bobby Stirk, III moving into second.  Stirk took the lead from McCarthy on lap-3 and Nickolas Hovey went to the outside of McCarthy to take second on lap-4.  McCarthy spun coming out of turn 4 to bring the caution back out with 4 laps complete.

Stirk took the lead back under green with Chris Meyer working his way into second.  Travis Hydar was in third followed by Frank L’Etoile, Jr. and Hovey.  Meyer went around Stirk to take over the lead on lap-8 and Stirk spun on the backstretch to bring the caution back out with 8 laps complete.

On the restart, Travis Downey came into contact with another car which sent Downey’s car upside down and sliding into turn 3 to bring the red and yellow flags out.

Meyer took the lead on the restart with L’Etoile going side by side with Hydar for second.  L’Etoile took second on lap-10 with Hovey taking third from Hydar on lap-11.  Hydar came back to the inside of Hovey on lap-12 and he retook third on lap-11.  The caution came back out with 11 laps complete for Jeremy Washburn, who spun in the middle of turns 1+2.

Meyer took the lead back under green but before a lap could be completed the caution came back out for Tyler Trott, who hit the turn 3 wall.

Hydar charged back into the lead with a pass in turn 4 as the leaders took the white flag.  Bill Cote spun on the frontstretch to bring the caution back out before the leaders could take the checkered flag to set up a green white checkered finish.

Hydar and Meyer went side by side for the lead on the restart with Hydar taking the lead on the final lap.  Washburn spun in turn 3 but was able to get going and the race stayed green.  L’Etoile couldn’t get close enough to Hydar on the final lap as Hydar took down his third win of the 2021 season.  L’Etoile finished second with Hovey, Paradis, and Meyer rounding out the top-5.