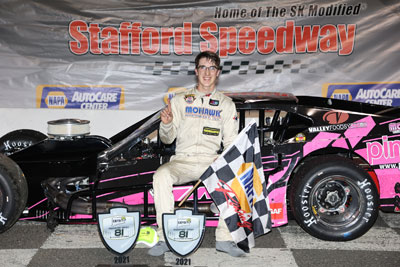 (Stafford Springs, CT)—Open Modified cars returned to Stafford Motor Speedway for the first of four visits during the 2021 season on Friday, May 14th for the Call Before You Dig Open Modified 81.  Michael Christopher, Jr., driving for Tommy Baldwin, Jr., took the lead from NASCAR Cup Series competitor Ryan Preece on lap-50 and he led the final 31 laps to pick up winning contingency bonuses of $1,000 from GAF Roofing and $500 from New England Racing Fuel to push his winner’s check up to $5,000.

The race took the green flag with Chase Dowling taking the early race lead with Michael Christopher, Jr. and Patrick Emerling side by side for second.  Christopher won that duel and took second on lap-3 with Ronnie Williams in fourth and Joey Cipriano in fifth.  Ryan Preece was sixth in line followed by Keith Rocco, Stephen Kopcik, Todd Owen, and Craig Lutz.

Dowling was beginning to slowly stretch out his lead over Christopher in second while Williams made a move to the inside of Emerling to take over third place on lap-11 and Preece overtook Cipriano to move into fifth.  Preece took fourth place from Emerling on lap-18 while Dowling was still comfortably in the lead with Christopher and Williams still giving chase.  This was still the running order when the caution came out with 29 laps complete for a spin on the backstretch by Lutz.

Dowling took the lead on the restart with Christopher and Williams going side by side for second.  Preece was fourth in line with Rocco in fifth place.  Emerling was in sixth place followed by Cipriano, Cam McDermott, Woody Pitkat, and Marcello Rufrano.  Just before he was about to complete lap-34, Dowling abruptly pulled his car to pit road through the mini mile, which handed the race lead over to Christopher.  Preece was now up to second behind Christopher with Williams, Rocco, and Cipriano making up the top-5.  The caution came back out with 47 laps complete for a spin in turn 2 by Eric Goodale.

Under the caution the entire lead lap of cars with the exception of Noah Korner and Anthony Nocella came to pit road for a change of two tires and adjustments.  Cipriano won the race off pit road followed by Preece, Williams, Christopher, Matt Galko, Emerling, Goodale, Chris Pasteryak, Kopcik, and McDermott.

Nocella took the lead on the restart with Korner and Preece right there with him, but the caution came back out with 48 laps complete for Goodale, who dropped off the pace on the backstretch and the car of Tom Abele, Jr. came to a stop on the backstretch. 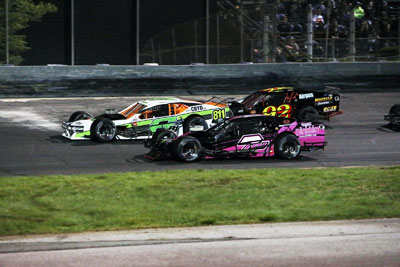 Nocella took the lead on the restart but Preece made a 3-wide move in turn 4 to take the lead but his time at the front was short as Christopher shot under Preece in turns 1+2 on lap-50 to move into the lead.  Burt Myers spun on the backstretch to bring the caution flag back out with 51 laps complete.

Christopher took the lead back under green with Preece and Cipriano right behind him.  Emerling was fourth in line followed by Williams, the side by side duo of Nocella and Pasteryak, McDermott, Pitkat, and Galko.

With 10 laps to go, Christopher was still in the lead with Preece several car lengths behind in second.  Cipriano was third followed by Emerling, Williams, Nocella, McDermott, Goodale, Rocco, and Owen.

Christopher led Preece to the checkered flag to win the Call Before You Dig Open Modified 81.  Cipriano finished third with Emerling and Nocella rounding out the top-5.

Call Before You Dig 81 Feature Results