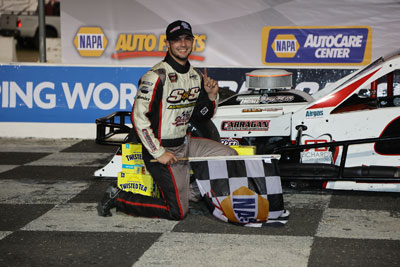 (Stafford Springs, CT)—Open Modified cars returned to Stafford Motor Speedway for the second of four visits during the 2021 season on Friday, June 11th for the Twisted Tea Open 80.  Chase Dowling used a late race restart to power his way into the lead for the final 17 laps to win the Twisted Tea 80 and take home contingency bonuses of $1,000 from GAF Roofing and $500 from New England Racing Fuel to push his winner’s check up to $5,000.

Michael Christopher, Jr. and Ryan Preece led the field to the green flag with Preece taking the lead at the start.  Christopher settled into second with Michael Gervais, Jr. third, Chase Dowling fourth and Anthony Flannery fifth.  Several cars got bottled up mid pack and getting collected in the melee were the cars of Andrew Molleur, Max Zachem, Jeff Gallup, Andrew Charron, Todd Owen, Chris Pasteryak, and several others to bring the caution out with 4 laps complete.

Preece chose the outside lane for the restart and he took the lead back under green.  Dowling took to the outside groove to power his way by Christopher and move into second.  Christopher settled into third with Marcello Rufrano and Anthony Nocella going side by side for fourth place.

With 25 laps complete, Preece was still in command of the race with Christopher, Dowling, Rufrano, and Nocella making up the top-5.  Tommy Barrett, Jr. was up to sixth with Woody Pitkat, Eric Goodale, Gervais, and Matt Galko rounding out the top-10.

At the halfway point of the race, it was still Preece in the lead followed by Christopher, Dowling, Rufrano, Nocella, Barrett, Goodale, Pitkat, Galko, and Ronnie Williams.  Preece has stretched out his advantage over Christopher to about a half straightaway and he was beginning to navigate lapped traffic, but the lapped cars weren’t slowing Preece down at all.

With 20 laps to go, Preece had stretched out his advantage over Christopher even further.  Christopher would lose second place to Rufrano on lap-63, just before the caution flag flew for a spin in turn 2 by Stephen Kopcik.  Under the caution, everyone came to pit road for 2 tires and adjustments for the final 17 laps to the finish.  Ronnie Williams won the race off pit road to take over the race lead and he was followed by Dowling, Rufrano, Galko, Goodale, Cipriano, Nocella, Barrett, Chrisotpher, and Dana DiMatteo.  Preece had an issue with a stripped lug nut on his stop and came out at the rear of the field before coming back to pit road a second time to change his second tire.

Dowling took the lead on the restart with Williams slotting into second.  Galko took third with Rufrano in fourth and and Nocella in fifth.  Goodale was sixth followed by Joey Cipriano, Barrett, Christopher, and Preece was already back up to tenth place after restarting in 14th place.  The caution came back out with 69 laps complete for spins in turn 4 by DiMatteo and Gervais.

Dowling took the lead back under green with Williams and Rufrano behind him.  Preece was a man on a mission going from eighth to fourth and Galko was fifth.  Preece went by Rufrano to take third place on lap-74 and he pulled alongside Williams for second with 3 laps to go.  Preece was finally able to get clear of Williams as the car took the white flag but he didn’t have enough time to catch Dowling as Dowling won the Twisted Tea Open 80.  Rounding out the top-5 behind Dowling and Preece was Williams, Rufrano, and Galko.