Following First Career Win, Nickolas Hovey Looking to Go Back to Back in Midstate Site Development Street Stock 30 at Stafford 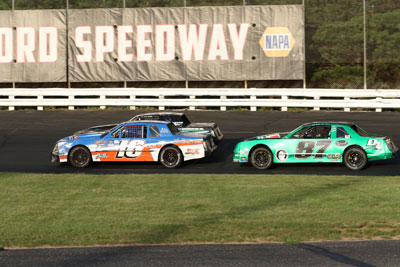 (Stafford Springs, CT)—With Stafford Speedway’s Street Stock division preparing for their biggest race of the season, the Midstate Site Development 30 scheduled for Friday, July 16, a theme has developed among the Street Stock feature winners.  Victories in the first 6 races of the season were split among three division veterans in Travis Hydar, Frank L’Etoile, Jr., and Chris Meyer.  But the last 2 races leading into the 30-lap extra distance event have seen first time Street Stock winners between Adrien Paradis, III, and the most recent feature winner Nickolas Hovey.  Hovey is the reigning R.A.D. Auto Machine Street Stock Rookie of the Year and the 15 year old driver of the #16 Busy Bees Learning Center Chevrolet will be looking to go for 2 wins in a row in the MSD 30.

“I think we have a good shot at going back to back,” said Hovey.  “Obviously we’re going to be starting further in the back by winning so the 10 extra laps will give us enough time to race our way towards the front.  Drivers will either show a little extra patience or with the extra money on the line, they might be a little more aggressive in this race.  Winning this race would mean a lot for us.  Not so much for the extra money but just being able to win 2 in a row.  I have to give a big thank you to my Mom and Dad, Chris’ Automotive, R & G Sealcoating, Iron Horse Equipment, Busy Bees Learning Center, Critical Signs, Airtime Dumpster Rental, and Heidi’s Creations for all their support.” 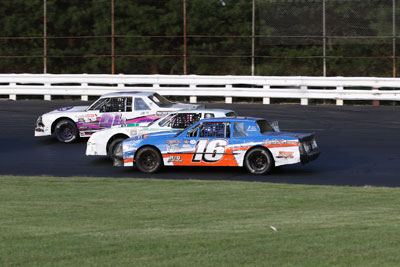 Hovey’s first 30-lap experience last season turned out to be a disappointment as he was out of the race by lap 10.  With more experience and a boost of confidence after winning his first race, Hovey feels good about being a contender in this year’s MSD 30.

“Last season we lost the clutch about 10 laps into the race so we didn’t finish,” said Hovey.  “I’ve never raced anything over 20 laps at Stafford so this will all be uncharted territory.  At the end of the last race we were still turning laps that were only a tenth or two of a second slower than our fastest laps so we should be pretty good.  The key for me will be to save something for later in the race because sometimes I tend to use my equipment up early in the race by killing the brakes or wearing the tires out.”

Hovey has proved to be a very quick study when it comes to Street Stock competition at Stafford.  Hovey arrived at Stafford as a 14 year old rookie with zero experience at the Connecticut half-mile.  In 14 starts last season, Hovey was regularly in the top-10 with 12 top-10 finishes but only 2 top-5 finishes.  Hovey has showed no signs of a sophomore slump this season as he opened the year with back to back podium finishes before a crash relegated him to a 16th place finish on May 14.  Hovey has finished each subsequent feature event in the top-9 and he finally earned his first win after a second and two third place finishes this season. 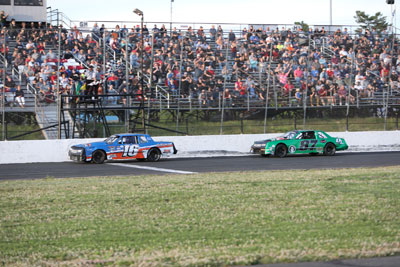 “Winning that race was a big relief,” said Hovey.  “We’ve been close in a lot of races this season. We’ve just been missing a little bit whether it’s something with the car or my experience.  Last year we had a lot of speed but it was a matter of me being a rookie and having a lack of experience at Stafford.  I think we came into this season with a lot more speed than I anticipated and we’re still missing a little bit but we’re definitely very close.  There’s always room to make the car quicker.”

“Nickolas had been beating himself up for a couple weeks because he hadn’t won yet and I told him it takes some people a long time to win race and if you hang around enough at the front, wins are going to come,” said Walt Hovey, Nickolas’ father and crew chief on the #16 car.  “I expected him to win because he’s been running well enough to win but nothing takes away from just how good it feels to get that first win.  It was pretty special because a lot of hard work has gone into his car and Nickolas is a good study of the sport.  To see his effort paying off is pretty special.  When he pulled into victory lane, I wanted to run over and jump in the car with him but I had to stand back and watch his reaction because it was such a special moment for him.”

In less than 2 full seasons Hovey has gone from a rookie driver with zero experience to feature winner, which he attributes to simply having more seat time and not only learning about what his car needs, but learning about the competition and how to race them as well. 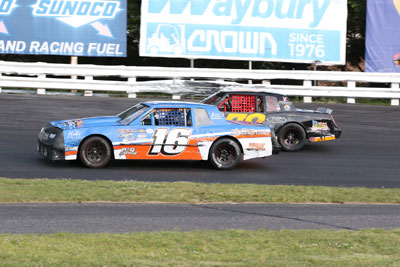 “I think it’s a combination of experience and car setup,” said Hovey.  “Last year, my father had never raced at Stafford before so we were just trying to find something with the car setup that worked to fit my driving style and I think this season we’ve really hit on something.  As the year has gone on I’ve gained more experience driving through the field due to the handicapping and I’ve spent more time racing at the front of the field and that’s really helped me.  When I first started last year I wasn’t even full throttle in the car yet.  I think I’ve run enough races between Stafford, Thompson, and Waterford to know what the car is going to do but I’ve still got a few more things to learn about the track and my competitors.”

The MSD Street Stock 30 is set for this Friday, July 16.  The Street Stocks will be joined by the SK Modified®, Late Model, SK Light, and Limited Late Model divisions and tickets for the MSD Street Stock 30 are available online at StaffordSpeedway.com/tickets and will also be available at the gates day of show.  General Admission tickets are $20.00 for adults, $5.00 for kids 6-14, and free for kids 5 & under.  Reserved seating is priced at $25.00 for all ages and pit passes are $35.00 with a valid 2021 Stafford Competition License and $40.00 without a Stafford license.  Following the conclusion of feature racing events, there will be a fireworks presentation.  If you are unable to attend the event, tune into the live stream on FloRacing, the official streaming partner of Stafford Speedway.