(Stafford Springs, CT)—Stafford Speedway returned to racing action on Friday, July 23 with the 5th Annual Dunleavy’s Modifiedz Night.  Stafford’s SK Lights took center stage with a 40-lap feature that paid over $13,000 in total posted awards.  Derek Debbis won the Dunleavy’s Modifiedz Night feature for the second consecutive season and in the process, he took home $5,600 in purse and contingency money thanks to the Dunleavy’s Gamblers Challenge bonus of $3,750.  Stephen Kopcik scored his second win of the 2021 season in the SK Modified® feature but it was Michael Christopher, Jr. continuing his big money winning ways as he was the lucky draw winner of the SK Modified® Gamblers Challenge worth an extra $5,800 from his third place finish.  Other feature winners on the night were Kevin Gambacorta in the Late Model feature, Alexandra Fearn in the Limited Late Model feature, and Kyle Johnson was a career first time winner in the Street Stock feature. 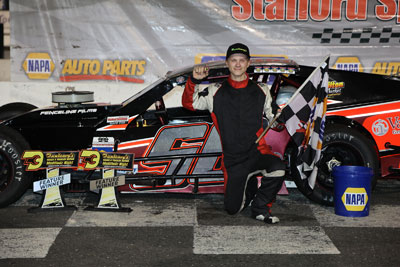 In the 40-lap Dunleavy’s Modifiedz Night SK Light feature event, a multicar spin in turn 1 involving Alina Bryden, Anthony Bello, and Glenn Bartkowski brought the caution out before a lap could be completed.  Bryden and Bello were both able to continue while Bartkowski’s car had to be towed off the track.

Tyler Barry led the field back to green and took the early lead.  Amanda West and Meghan Fuller were side by side for second but the caution came back out with 4 laps complete as Josh Carey and Cassandra Cole hit the frontstretch wall with Bello and Peter Bennett also involved to bring the caution back out.

West took the lead on the restart with Chris Matthews taking second.  Alexander Pearl was up to third with George Bessette, Jr. fourth and Derek Debbis fifth.  Fuller got into the wall along with Bryden and Chris Bagnall to bring the caution back out with 7 laps complete.

Matthews took the lead on the restart with Pearl taking second and Bessette taking third.  West fell from the lead back to fourth in line with Debbis in fifth.  Pearl made a move to get by Matthews going into turn 3 on lap-10 to move into the lead.  Bessette made a move around Matthews to take second on lap-14 with Debbis now up to fourth and Bob Charland was fifth as West fell back to seventh place behind Mark Bakaj in sixth.

Debbis made a move on Matthews to take third place on lap-17 while Bessette was applying heavy pressure to Pearl in the fight for the lead.  Norm Sears and Bello spun on lap-20 but both cars were able to get going and the race stayed under green flag conditions.  Bessette was still hounding Pearl for the lead with Debbis slowly closing in on the lead duo to make it a 3-car fight for the lead.  Charland got around Matthews on lap-24 to move into fourth place while Bessette was finally able to make a pass on Pearl to take the race lead.  Pearl came right back on Bessette with a crossover move but Bessette was able to maintain the lead.  Debbis was now right on Pearl’s back bumper and he took second on lap-27.

With 5 laps to go, Bessette and Debbis had begun to pull away from Pearl in third but with 36 laps complete, Nicole Chambrello spun in the middle of turns 3+4 right in front of Bessette, who narrowly avoided making contact with Chambrello as the caution came out.

Bessette chose the outside lane for the restart and he lost the lead to Debbis on the restart.  One lap was completed before the caution came back out for a spin on the frontstretch by Tyler Chapman.

Debbis took the outside lane for the restart but he was able to keep the lead with Bessette right behind him in second.  Bakaj was up to third with Pearl fourth and Matthews fifth.  Debbis took the checkered flag to pick up his fourtrh win of the 2021 season and his second consecutive Dunleavy’s Modifiedz Night win.  Bessette finished second with Bakaj, Pearl, and Matthews rounding out the top-5. 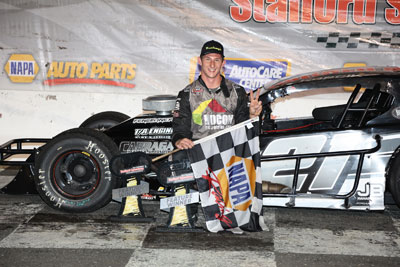 In the 40-lap SK Modified® feature event, Doug Meservey, Jr. took the lead on lap-2 after a side by side first lap with Noah Korner.  Korner and David Arute were now side by side for second on lap-3 with Marcello Rufrano in fourth and Tyler Hines quickly worked his way up to fifth.  Just behind Hines were two side by side duels between Stephen Kopcik and Keith Rocco and Chase Dowling and Michael Christopher, Jr.

Korner took the lead from Meservey on lap-9 which brought Rufrano up to second.  Rufrano then took the lead from Korner before they completed lap-10.  Arute and Meservey were now side by side for third with Kopcik and Hines side by side for fourth.  Arute cleared Meservey on lap-12 with Kopcik taking fourth place.  Christopher was now up to fifth place with Hines sixth, Meservey seventh, Rocco eighth, Dowling ninth, and Dan Wesson making up the top-10.

Kopcik took the lead from Rufrano on lap-22 with Korner, Christopher, and Arute making up the top-5.  Sixth through tenth were Hines, Rocco, Todd Owen, Dowling, and Wesson.  With 10 laps to go, it was still Kopcik in command with Rufrano, Christopher, Korner, and Rocco giving chase.

Kopcik led Rufrano and the field to the checkered flag to pick up his second win of the 2021 season.  Christopher finished third with Korner and Rocco rounding out the top-5. 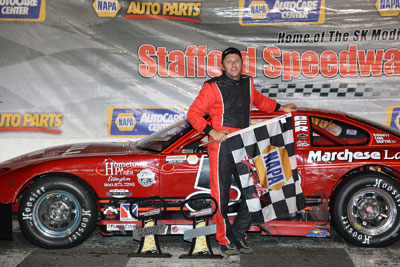 In the 30-lap Late Model feature event, Zack Robinson took the lead at the drop of the green with Paul Arute taking second.  Kevin Gambacorta was third in line with Darrell Keane and Michael Wray side by side for fourth place. Keane won that duel but the caution flew with 3 laps complete as Paul Varricchio, Jr. and Andrew Durand spun in turn 1 with Durand tapping the turn 1 wall.

On the restart, Arute and Keane spun into the turn 1 wall to bring the caution right back out.  Michael Bennett was sent to the rear of the field by Stafford officials for contact with Keane.  Robinson took the lead on the next restart with Wray coming up to second.  Tom Fearn took third with Gambacorta fourth and Andrew Molleur in fifth.  Wray got alongside Robinson and he took the lead by a nose at the line as they completed lap-7.  Wray and Robinson were still side by side two laps later with Fearn looking for a way to get by either car.  Fearn was able to make the move to the inside of Robinson to take over second on lap-10 and that move allowed Molleur to take third and Gambacorta fourth as Robinson slid back to fifth.  Fearn took the lead from Robinson on lap-11 and Robinson would slip back to sixth as Molleur took second, Gambacorta third, Bennett fourth after restarting at the rear of the field, and Wray fifth.  Molleur took the lead from Fearn on lap-14 and that allowed Gambacorta to take second and Bennett third as Fearn fell back to fourth with Robinson in fifth.

With 10 laps to go, Molleur held the lead with Gambacorta right behind him in second.  Bennett was third followed by Fearn and Robinson.  Gambacorta made a move to the inside of Molleur and he was able to make a pass to take over the lead on lap-22.  Bennett took second from Molleur on lap-23 with Fearn and Robinson still fourth and fifth.  The caution flew with 28 laps complete for a spin by Robinson that set up a green white checkered finish.  John Blake was sent to the rear of the field for making contact with Robinson.

Gambacorta and Bennett went door to door on the restart with Fearn in third ready to pounce if the two leaders touched.  Gambacorta had the elad by a nose as they took the white flag and he was able to pull ahead of Bennett in turns 3+4 as they headed to the checkered flag to pick up his second win of the 2021 season by a car length.  Fearn finished third with Adam Gray and Molleur rounding out the top-5. 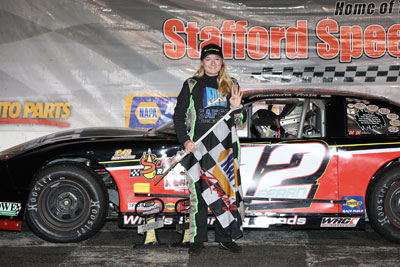 In the 20-lap Limited Late Model feature event, R.J. Surdell led the field to the green but his time out front was short as Devon Jencik took over the top spot on lap-2.  Jeremy Lavoie took second to drop Surdell back to third, just  in front of Gary Patnode and Jay Clement.  Caution 3 laps complete

Jencik took the lead back under green with Lavoie glued to his back bumper in second.  Surdell was third with Alexandra Fearn working her way up to fourth and Patnode was fifth in line.  Lavoie took the lead from Jencik on lap-5 and on lap-6 Fearn overtook Surdell to move into third.  Fearn’s moved opened the door for Patnode to take fourth and Matt Clement fifth as Surdell slid back to sixth in line.

At the halfway point Lavoie was still in command with Jencik in second.  Fearn was third followed by Patnode, Matt Clement, Rich Hammann, Surdell, Matt Scappini, Damian Palardy, and Dave Shinder.  Fearn made a move to get by Jencik and take over second place on lap-14.  The caution came back out with 16 laps complete for Surdell, who spun and hit the backstretch wall coming out of turn 2.

The caution came back out on the restart as Surdell, Trinity Provost, and Shinder all spun coming out of turn 2 before a lap could be completed.  Lavoie took the lead on the next restart with Fearn in second.  Jencik was third with Hammann coming up to fourth and Patnode was in fifth place.  Patnode took a look to the inside of Hammann on lap-18 but fell back into line in fifth place.  Fearn took the lead from Lavoie going down the backstretch on lap-19.  Fearn grazed the wall coming out of turn 2 on the final lap but she was able to maintain the lead and she led Lavoie back to the checkered flag to pick up her fourth win of the 2021 season.  Jencik finished third with Hammann fourth and Patnode rounding out the top-5. 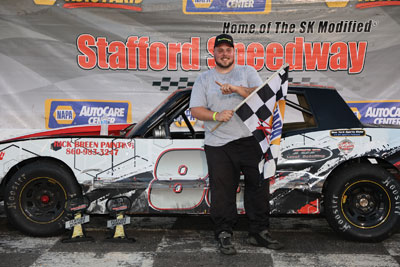 In the 20-lap Street Stock feature event, Marvin Minkler streaked into the lead with Chris Danielczuk behind him in second but Travis Downey and John Orsini took a spin through the backstretch grass and brought the caution out with 1 lap complete.

Kyle Johnson nearly went 3-wide with Minkler and Danielczuk on the restart but he settled back into third as Minkler took the lead.  Johnson quickly took second from Danielczuk with Bert Ouellette coming up to third.  Danielczuk fell back outside the top-5 while Johnson went by Minkler to take over the race lead on lap-4.  Ouellette followed him through into second with Adrien Paradis, III taking third and Frank L’Etoile, Jr. taking fourth as Minkler slid back to fifth place.  The caution came back out with 5 laps complete for a spin by Jeremy Washburn.

Johnson took the lead on the restart followed by Ouellette, Paradis, L’Etoile, and Chris Meyer was up to fifth.  Meyer took a look to the inside of L’Etoile for fourth and he made the pass on lap-7.  Just behind Meyer and L’Etoile was a great fight for sixth place between Tyler Trott and Nickolas Hovey.

L’Etoile worked his way back by Meyer to take fourth and with 5 laps to go he made a pass on Paradis to take third place as Johnson and Ouellette continued to occupy the front two positions.  L’Etoile took second from Ouellette on lap-19 but he couldn’t get close enough to Johnson as Johnson took down his very first career feature win at Stafford.  Ouellette finished third with Paradis and Meyer rounding out the top-5.