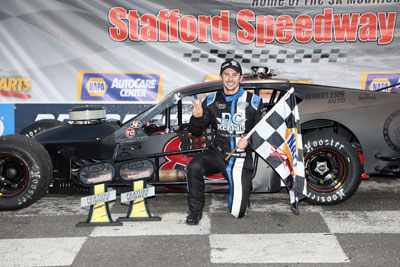 In the 40-lap SK Modified® feature event, several cars including Todd Owen and Dylan Kopec went through the turn 1 grass with Kopec spinning to bring the caution out before a lap could be completed.  Doug Meservey, Jr. took the lead on the restart with Andrew Molleur coming up to second.  Bryan Narducci was side by side with Noah Korner for third with Tyler Hines in fifth place.  Narducci took third on lap-5 with Hines taking fourth and Korner falling back to sixth behind Marcello Rufrano.

Molleur quickly erased the gap to Meservey and with 7 laps complete he was right on Meservey’s bumper.  Hines was now third in line followed by Narducci and Rufrano.  Rufrano took fourth from Narducci on lap-9 while Molleur made a move to the inside of Meservey for the lead and he took over the race lead on lap-10.  Keith Rocco took fourth from Narducci on lap-11 and he got by Meservey on lap-15 to move into third as Hines was glued to the back bumper of Molleur in the fight for the lead.

Korner and David Arute came together on the backstretch with Arute in the wall and Korner coming to a stop on the grass to bring the caution right back out.  Hines took the lead from Rocco on the restart and on lap-36 Kopcik took second from Rocco.  Behind the lead trio Chase Dowling was up to fourth place with Michael Christopher, Jr. up to fifth.  Rocco dove to the inside of Kopcik on lap-39 to try to take second but he couldn’t complete the pass.  As Kopcik and Rocco ran side by side on the final lap, Hines cruised to his second win of the 2021 season.  Rocco nipped Kopcik at the line for second with Dowling and Christopher rounding out the top-5. 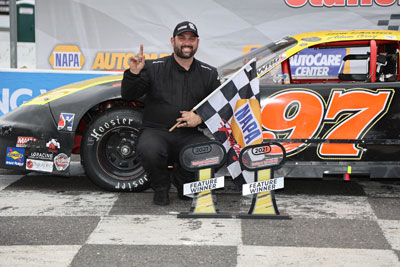 In the 30-lap Late Model feature event, there was a multicar accident at the start that involved the cars of Darrell Keane, Josh Wood, Al Saunders, Michael Wray, Trace Beyer, Mike O’Sullivan, Tom Fearn, and Greg DeMone to bring out the caution.  Wayne Coury, Jr. took the lead on the restart with Rick Lanagan slotting into second place.  Paul Arute moved up to third with Tom Butler and Adam Gray making up the top-5.  Arute went by Lanagan on lap-5 to move into second and his move opened the door for Butler and Gray to follow him through into third and fourth and drop Lanagan back to fifth.  Gray took third from Butler on lap-7 while Lanagan was still sliding backwards with Michael Bennett moving into fifth place.

Bennett took fourth from Butler while Gray got by Arute to take over second on lap-11 with Coury still comfortably in the lead.  At the halfway point, Coury had a half straightaway lead over Gray in second with Arute, Bennett, and Butler making up the top-5.  Andrew Durand was sixth followed by Wray, Lanagan, Kevin Gambacorta, and Andrew Molleur.

Gray slowly erased the lead that Coury had built up over the next 10 laps and on lap-25 Gray took the lead from Coury with a pass coming out of turn 2.  Bennett was third in line followed by Arute and Butler.

Coury couldn’t get close enough to Gray to make a move as Gray took down his first feature win of the 2021 season.  Bennett finished third with Arute and Butler rounding out the top-5. 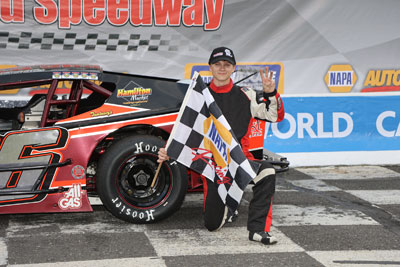 In the 20-lap SK Light feature event, Meghan Fuller took the lead the green flag with Tyler Barry in second.  Barry took the lead from Fuller on lap-2 with Glenn Bartkowski and Derek Debbis side by side for third behind Fuller and Amanda West and Bob Charland were side by side for fifth place.  Bartkowski took second on lap-4 with West moving up to third.  Debbis was now fourth with Fuller back to fifth as Barry was starting to stretch out his lead.

Debbis went by Bartkowski and West on lap-6 to move into second.  Steven Chapman spun in turn 2 to bring the caution out with 6 laps complete.

Debbis took the lead from Barry on the restart with West in third.  Bartkowski and Norm Sears were side by side for fourth with Fuller and Chris Matthews side by side behind them.  Sears took fourth and Matthews took fifth as Bartkowski slid back outside the top-10 and Fuller was in tenth place.

Josh Carey was working his way towards the front and he took fifth from Sears on lap-14 and then went by West for fourth place on lap-15 as Debbis was pulling away from Barry in second and Matthews in third.  George Bessette, Jr. took fifth from West on lap-17 but it was all Debbis at the front of the field as he scored his third win of the 2021 season.  Barry finished second while Matthews spun in turn 4 on the final lap and collected the car of Steven Chapman.  Carey finished third but he was penalized for making contact with Matthews, promoting Bessette to third, Alexander Pearl to fourth, and Brian Sullivan to fifth. 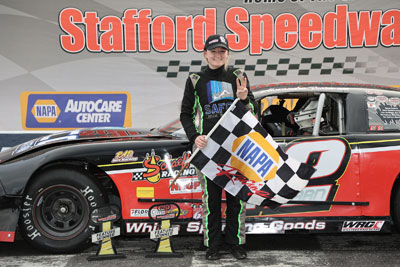 In the 20-lap Limited Late Model feature event, Damian Palardy took the early lead at the drop of the green flag with Jay Clement in second.  Rich Hammann quickly worked his way up to third with Gary Patnode making a strong 3-wicde move to take fourth and Jeremy Lavoie was fifth in line.  Palardy led the first two laps before giving way to Jay Clement on lap-3.

Fearn was applying heavy pressure to Hammann for the lead but Hammann was able to maintain the lead.  The caution came out with 15 laps complete for a spin by Shinder, who got loose coming out of turn 4 and spun on the frontstretch.

Hammann charged back into the lead on the restart with Fearn right behind him in second.  Lavoie and Jay Clement were side by side for third place with Lavoie taking third on lap-17.  Fearn also went by Hammann on lap-17 to take over the race lead.  Matt Clement followed Lavoie by his brother Jay to move into fourth and drop Jay back to fifth in line.

Hammann couldn’t get close enough to Fearn in the final laps as Fearn took down her third win of the 2021 season.  Matt Clement finished third with Lavoie and Jay Clement rounding out the top-5. 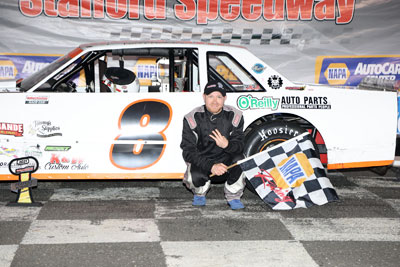 In the 20-lap Street Stock feature event, Chris Danielczuk took the early lead from pole position with Marvin Minkler taking second and Travis Downey third.  Jeremy Washburn was fourth and Nickolas Hovey fifth and behind them was a host of cars side by side.

Jason Finkbein went by Washburn on lap-5 to move into fifth but his time in fifth was short as he got passed by Chris Meyer, Frank L’Etoile, Jr. and Travis Hydar on lap-6 to fall back to eighth place just in front of Washburn.  The caution came out with y7 laps complete for a spin in turn 3 by Bill Cote and Patrick Grady.

Danielczuk took the lead on the restart while Downey took second.  Meyer was third in line followed by Bert Ouellette and Minkler.  The caution came back out with 9 laps complete for spins in turn 1 by Finkbein and Tyler Trott.

Meyer took the lead on the restart with Downey taking second.  Ouellette was third in line with L’Etoile and Minkler going 3-wide with Danielczuk for fourth.  L’Etoile took fourth with Minkler fifth and Travis Hydar was now sixth as Danielczuk fell back to ninth place.

Downey, L’Etoile, and Ouellette were locked in a heavy fight for second place, which was allowing Meyer to stretch out his lead.  Meyer’s lead was erased by the caution flag with 11 laps complete for Samantha Dell, who came to a stop against the turn 2 wall.

Meyer took the lead on the restart with L’Etoile and Ouellette right behind him.  Downey was fourth but he slid back to sixth on lap-17 as Hydar took fourth and Hovey moved into fifth.  L’Etoile stalked Meyer over the final laps and he made a move on the final lap to squeeze his way past Meyer to take the lead and the victory by a nose in a thrilling finish.