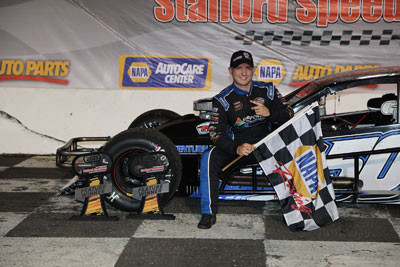 In the 40-lap SK Modified® feature event, Doug Meservey, Jr. took the lead ahead of Teddy Hodgdon at the drop of the green but before a lap could be completed, a multicar incident in turn 4 involving the cars of Dan Wesson, Jon Puleo, Todd Owen, and several others brought the caution out.

Meservey took the lead on the restart with Hodgdon right behind him.  Bryan Narducci was third in line followed by Tyler Leary and Mikey Flynn.  Ronnie Williams was sixth followed by David Arute, Andrew Molleur, Marcello Rufrano, Michael Gervais, Jr., and Chase Dowling.

Hodgdon made a move to get by Meservey and move back to the lead on lap-6.  Williams got around Flynn to move into fifth and now Arute was all over the back bumper of Flynn for sixth.  Williams continued to charge his way towards the front as he took third from Narducci on lap-9 and then took second from Meservey on lap-10.  Williams completed his move to the front on lap-14 as he went around Hodgdon to take over the lead.

At the halfway point of the race, Williams was still in command with Hodgdon in second.  Meservey was third followed by Narducci, Stephen Kopcik, Leary, Flynn, Rufrano, Arute, and Dowling.  Kopcik went by Narducci to move into fourth place on lap-23 before the caution flew with 24 laps complete as Arute spun in turn 4.

Hodgdon and Williams ran 2 laps side by side for the lead before Williams got clear to the lead.  Kopcik and Hodgdon were now side by side for second with Kopcik getting the better of that duel on lap-29.  With 10 laps to go the order was Williams, Kopcik, Hodgdon, Meservey, Narducci, Dowling, Owen, Michael Christopher, Jr., Leary, and Flynn.  The caution came back out with 32 laps complete for a spin in turn 4 by Noah Korner.

Just like the last restart, Williams and Kopcik went side by side for the leada with neither driver giving an inch.  Williams finally got clear to the lead on lap-35 with Hodgdon in third, Meservey fourth and Narducci fifth.  Narducci moved up to fourth on lap-37 and his move brought Owen up to fifth with Meservey sliding back to sixth in line.

Kopcik was looking high and low for a way to get around Williams, but Williams was able to hold him off.  Kopcik couldn’t get close enough to Williams on the final lap as Williams nailed down his first win of the 2021 season.  Hodgdon finished third with Owen and Narducci rounding out the top-5. 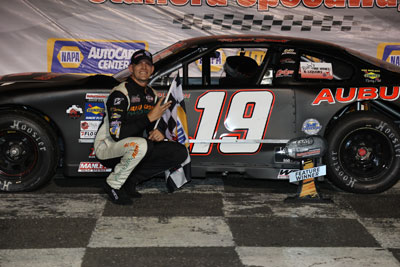 In the 30-lap Late Model feature, Duane Provost got into the backstretch wall and came to a stop to bring the caution flag out before a lap could be completed.  Marc Curtis took the lead on the restart but he was only able to lead the first two laps before giving way to Zack Robinson on lap-3.  Andrew Durand took second and he went side by side with Robinson for the lead.  Durand took the lead on lap-5 while Ryan Fearn was up to third, Michael Bennett was fourth and Michael Wray fifth as Curtis slid back to sixth in line.

Ryan Fearn took second from Robinson on lap-7 and that brought Bennett into third as Robinson fell back to fourth.  A multicar accident in turn 3 involving Tom Fearn, Paul Arute, John Blake, and Kevin Gambacorta brought the caution flag back out with 7 laps complete.

Durand led the first lap after the restart but Ryan Fearn took to the outside lane and went around Durand to move into the lead on lap-9.  Bennett followed Fearn by Durand to move into second and Wray got by Durand on lap-11 to take over third place.  Durand settled into fourth place just in front of Curtis, Darrell Keane, Paul Varricchio, Jr., Adam Gray, Robinson, and Tyler Leary.  Keane took fourth from Durand on lap-15 just before the caution came back out with 15 laps complete for a spin in the middle of turns 1+2 by Curtis.

On the restart, Wray went 3-wide with Bennett and Ryan Fearn in turn 3 to take over the lead.  Bennett took second while Ryan Fearn fell back to seventh place and he then took the lead from Wray on lap-18.  Keane got around Wray to take over third on lap-19 with Adam Gray up to fourth and Durand holding off Ryan Fearn for fifth place.

With 5 laps to go the order was Bennett in the lead followed by Keane, Wray, Gray, Ryan Fearn, Durand, Varricchio, Andrew Molleur, Tom Butler, and Tom Fearn.  Bennett held Keane off to the checkered flag to pick up his third win of the 2021 season.  Gray finished third with Wray and Ryan Fearn rounding out the top-5. 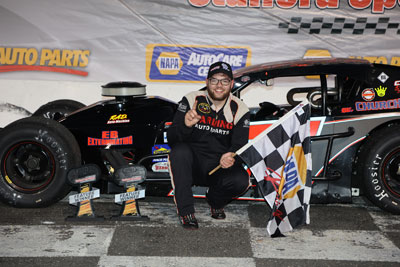 In the 20-lap SK Light feature event, the caution flag came right out after the drop of the green as Meghan Fuller spun and collected Amanda West.  The next restart saw Casey Vogt and Anthony Bello spin in turn 1 to bring the yellow out before a lap could be completed.  On the third start, Bob Charland took the lead from Norm Sears on the green flag with Peter Bennett taking second.  Sears slotted into third place with George Bessette, Jr. and Tyler Chapman side by side just behind him.  Nick Anglace was on an early charge as he moved into fourth on lap-5 to drop Tyler Chapman back to fifth as Charland continued to hold the lead with Bennett and Sears giving chase.

Anglace continued to move to the front as he took third place from Sears on lap-9.  Anglace’s move allowed Alexander Pearl to move into fourth and Bessette fifth as Sears slid back to seventh place just behind Bessette and Chris Matthews.

Pearl worked his way around Anglace for third and he went from third to the lead on lap-15.  Charland was now second with Bennett and Anglace side by side for third and Bessette in fifth.  The caution came back out with 15 laps complete for a spin in turn 2 by Derek Debbis.

Pearl took the lead back under green with Charland right behind him.  The order shuffled on lap-18 with Bessette taking second and Matthews third to drop Charland back to fourth in line.  Bessette couldn’t catch Pearl as he took down his first win of the 2021 season.  Bessette, Matthews, Charland, and Steven Chapman rounded out the top-5. 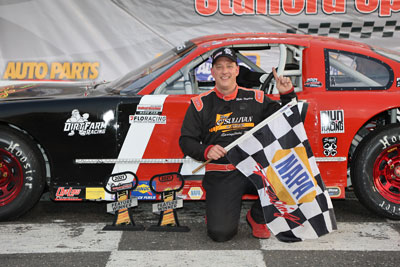 In the 20-lap Limited Late Model feature event, the race took the green with R.J. Surdell spinning in turn 2 to bring the caution out before a lap could be completed.

Gary Patnode took the lead from Damian Palardy at the drop of the green flag but the field could only complete one lap before the caution came back out for Alexandra Fearn, who spun in turn 2.

Palardy briefly took the lead back from Patnode on the restart but by the time the cars hit the backstretch, Patnode was back in front.  Rich Hammann quickly took third and then went by Palardy on lap-3 to move into second.  Mike Hopkins took third with Devon Jencik fourth and Jeremy Lavoie fifth.  Lavoie got around Jencik on lap-4 to move into fourth while Hammann and Hopkins were stalking Patnode for the lead.

Hammann went by Patnode on lap-8 to move into the lead.  Patnode settled into second with Hopkins still in third.  Lavoie was fourth with Fearn recovered from her early race spin to move into the fifth position.  Kevin Crosby spun in turn 4 to bring the caution back out with 11 laps complete.

On the restart, Jay Clement spun in turn 2 to bring the caution right back out.  The next restart saw Patnode again take the lead with Hammann giving chase.  Fearn moved from fifth into third with Hopkins fourth and Lavoie in fifth.  Hammann rode behind Patnode until lap-15 when he made a move for the lead going into turn 3.  Just as Hammann made his move Fearn made a 3-wide bid for the lead.  Patnode emerged still in font with Fearn in second and Hammann third.  Fearn spun in turn 1 to bring the caution out with 15 laps complete and Hammann was sent to the rear of the field for making contact with Fearn.

Patnode’s car dropped off the pace and limped back to pit road on the restart, allowing Hopkins to streak into the lead.  Lavoie was now second with Surdell back up to third.  Matt Scappini was fourth in line followed by Fearn and Hammann.  Hopkins led Lavoie to the checkered flag to pick up his first win in the Limited Late Model division.  Scappini finished third with Fearn and Surdell rounding out the top-5. 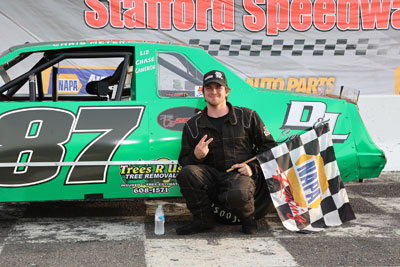 In the 20-lap Street Stock feature event, Chris Danielczuk led the field to the green flag and he took the early lead.  Kyle Johnson made a move to take second place on lap-2 with Tyler Trott taking third.  Marvin Minkler was stuck in the outside lane and was sliding backwards as Nickolas Hovey took third on lap-3 and Chris Meyer moved into fourth on lap-4.  Minkler slid all the way back to ninth place.  Trott took the lead on lap-4 but his time at the front was short lived as Johnson moved to the point on lap-5.

Meyer made a move going into turn 3 on lap-6 that moved him from third to the lead.  Frank L’Etoile, Jr. followed him to the front and he took second.  Trott settled into third place with Bert Ouellette up to fourth and Hovey in fifth.  Jason Finkbein was up to sixth followed in line by Johnson, Minkler, Danielczuk, and Travis Downey.

L’Etoile was starting to apply heavy pressure to Meyer for the lead as the race hit the halfway point.  Meyer was still leading L’Etoile when Samantha Dell spun in front of Meyer and L’Etoile coming out of turn 4 to bring the caution out with 14 laps complete.

Johnson dropped off the pace on the restart with a flat left front tire while Meyer and L’Etoile resumed their duel for the race lead.  Trott was third followed by Hovey, Ouellette, Finkbein, Travis Hydar, Downey, Minkler, and Bobby Stirk, III.  L’Etoile was all over the back bumper of Meyer but he couldn’t find a way around.  L’Etoile made a move to the outside of Meyer going into turn 3 on the final lap and he made a crossover move coming out of turn 4 to get a run on Meyer but he came up just short as Meyer scored the win by a nose.  Hovey finished third with Trott and Ouellette rounding out the top-5. 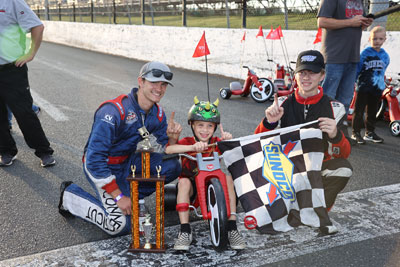 Aiden Royce was the winner of the Kids Night Big Wheel race that saw 15 kids between the ages of 3 and 7 take part in a race down the frontstretch.