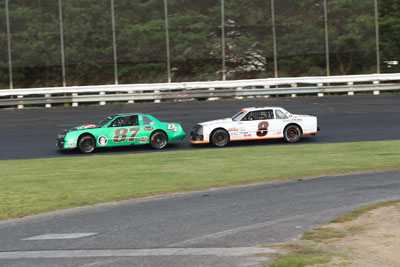 (Stafford Springs, CT)—With the 2021 season nearly a third of the way complete at Stafford Motor Speedway, Frank L’Etoile, Jr. and Chris Meyer have stamped their authority on the Street Stock division.  The foundation was laid at the season opening event on Saturday, April 24 as L’Etoile and Meyer were fighting for the victory in the closing laps.  L’Etoile ended up fading back to fifth as Meyer won after a green white checkered finish, but the seed was set.  The duo has gone on to record three 1-2 finishes between them.  L’Etoile and the #8 O’Reilly Auto Parts team is leading Meyer and the #87 D & L Services team, 2 wins to 1 in those 1-2 finishes.  Heading into the Friday, June 18 Street Stock feature, L’Etoile and Meyer both view each other as their main rivals for the 2021 season.

“There were a few drivers at first but I think the two of us have set ourselves apart from everyone else,” said L’Etoile.  “There’s so many races left though I wouldn’t count anyone out.  You have to keep on finishing races.   I know Chris has a lot of experience in these cars and experience is worth more than anything.  For me it’s been frustrating because it seems like I’m always behind him coming down to the last couple of laps but it’s been a lot of fun racing with him.” 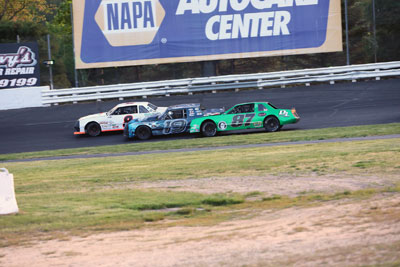 “Travis Hydar was right there with us for the first couple races and he hasn’t fallen off any, I just think Frank and I have gotten our cars even better and he’s my main rival right now,” said Meyer.  “We probably could have finished 1-2 in every race so far this season.  I botched a restart one night that cost me a win and we ended up finishing third behind Frank.  It’s been a lot of fun.  Frank and I have always raced good together and the intensity is starting to pick up a little bit but it’s been fun.”

Looking at either L’Etoile’s or Meyer’s finishes during the 2021 season, you might think that one of them might have a comfortable lead in the points standings.  L’Etoile has 3 wins, 2 seconds, and a fifth in 6 races while Meyer has 2 wins, 2 seconds, and third, and a fourth place finish.  With both drivers not only consistent but dominant in their race finishes, they are separated by only 2 points heading into the June 18 feature event.

“It’s not frustrating at all, honestly that is expected,” said L’Etoile.  “If neither of us crash, we should both be up front every week.  That’s what made me the most upset at the first race when we finished 5th, we gave up 8 points to Chris since he won.  If you’re getting top-2 or top-5 finishes every week, that’s pretty much all you can ask for.” 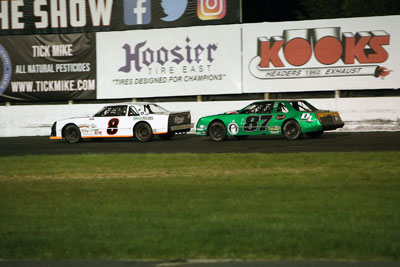 “I wish there were a few more cars that were up front with us every week,” said Meyer.  “That would make it a little easier for one of us to make up ground on the other instead of having only a 2 point difference each night.”

While Meyer is in only his second season of Street Stock competition at Stafford, L’Etoile is in his 5th full time season, including 2 championship seasons in the Street Stock division, and he has made part-time starts in 2 other seasons.  With more experience and the championships to his credit, one might think that L’Etoile has an advantage over Meyer, but both drivers say that isn’t necessarily the case.

“I think having more laps at Stafford might give me a little bit of an advantage when I’m chasing him down,” said L’Etoile.  “We both have very fast cars and I don’t think my experience will be any advantage in the long run.  Chris is a good driver and he has a good team around him and they’ve adapted very well to Stafford.”

“Honestly, I don’t feel like I’m at a disadvantage at all,” said Meyer.  “My next win will be my 30th career victory and I think Frank has around 12 or 13 wins.  He’s been racing at Stafford for a long time and he knows the track probably about as good as you can know it but I’m still learning things every week and getting better and improving.  From the start of this season to now, we’ve improved our car 2 or 3 tenths of a second and we keep on improving.  I’m still a little new to Stafford, but I’m not new to competition.”

Both L’Etoile and Meyer will be looking to continue their dominant ways as the season wears on into the heat of summer and both drivers say it’s a matter of being on top of their cars to maintain their high level of excellence on the track.

“We just have to keep on doing what we’ve been doing so far and I have to keep on getting the job done finishing races,” said L’Etoile.  “If we can do that, I think we’ll be fine.  If it comes down to the last race of the season and we end up losing by 4 points or something small like that, then tip of the cap to Chris and his team.”

“We work on the car pretty relentlessly and we continue to make improvements,” said Meyer.  “You just have to keep on top of your game with maintenance and constantly be searching for the next thing.  I feel like Frank turned the heat up on me a little last week so the competition is growing.  We expect to be on the podium every week and we work hard to do that and I’m sure Frank and his guys do the same thing.”

With 15 more races on the 2021 schedule to determine this year’s champion, both L’Etoile and Meyer are bracing for their on track battles to only intensify as the season keeps on trucking full speed ahead. 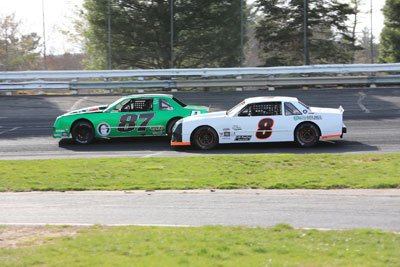 “It seems to be on that kind of a track,” said L’Etoile.  “We’re friendly and I hope things stay that way between us.  I don’t want to see either of us end up in the wall.  I’d like to be able to race it out and see what happens at the end.  Any time you’re around the same guy for that many laps week after week, it’s bound to get a little more intense.”

“I think it’s inevitable,” said Meyer.  “When you go 1-2 with someone every week, someone has to be the loser and last week it was our turn to be the loser.  We don’t intend to be the loser this week and I’m sure Frank feels the same way.  It’s been really smooth so far but we both really want to keep on winning races.”

The fight for the 2021 championship continues this Friday, June 18 with a Stafford Weekly Series event that will see the SK Modifieds®, Late Models, SK Lights, and Limited Late Models join the Street Stocks in feature action.  General admission and paddock tickets can be purchased online at staffordmotorspeedway.com/tickets or tickets will be available at the gates the night of the race.  Any fans who can’t make it to the track to watch in person can watch all the action live on FloRacing, click here to subscribe.