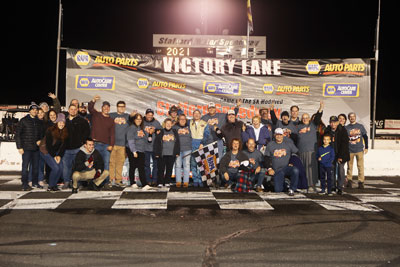 “It feels good to be a champion again because that was our goal and we really wanted to win this championship,” said L’Etoile.  “It’s not easy.  It can get pretty stressful thinking about points so you just have to have fun and every night is a new night.  It means a lot to have a third championship, especially at a track like Stafford where I grew up.  Having it be so far in between championships it’s almost like winning my first championship all over again.” 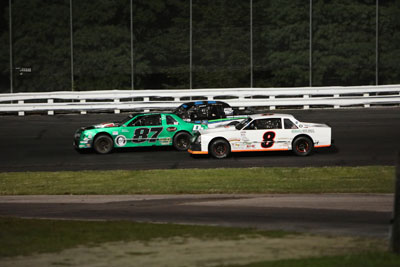 The seeds for L’Etoile’s championship run were planted last season when L’Etoile took the reigns of Bill Staves’ #8 O’Reilly Auto Parts Chevrolet.  L’Etoile missed the first four races last season but once he took the wheel on Aug. 7, he piloted the #8 to top-6 finishes in all 10 of his starts, including a win in the season ending NAPA Championship Night feature event as well as a non-points feature win on October 24.  L’Etoile and the #8 team picked up right where they left off, notching 12 podium finishes in the first 14 races this season, including 4 wins and 7 second place finishes, including 5 in a row from July 23 to August 20.

“We won the championship night race last year and we wanted to start this year where we left off last year,” said L’Etoile.  “I think we led about 18 laps of the first feature of the season but we ended up finishing fifth on the last lap due to some unfortunate circumstances.  This wasn’t a new team, this was pretty much my old team from when I ran Street Stocks before.  I think that’s one of the reasons why we were able to be so successful.  We might not have been racing at Stafford, but we never really stopped racing together.  I have to thank Billy and Cory Staves for giving me the opportunity to drive their car, my Dad and Star Fabrication, Joe and Gill Grismala, Auntie, Sully, Roger Stizzo, and Mike Procaccini for the crew.  I also have to give a big shout out to Kevin Procaccini for bringing so many different fans to the track every week whether it was people I knew from school, or hockey, or acquaintances from his work.  I met so many different people this season because he brought them to the track.  He was also selling tee-shirts throughout the year so I told him he is the president of my fan club.  For my sponsors, I have to thank O’Reilly Auto Parts, J.G. Poulin Drywall, Tommy’s Tattoo Supplies, Casagrande Builders, Standard Welding, Joe the Plumber, GetFranco.com, Gear Head Mafia Car Club, K & W Custom Auto, G.R.P. Services, and JET Electric.” 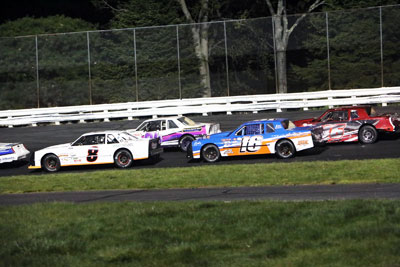 In their two seasons together, L’Etoile and the #8 team owned by Staves have been an almost unbeatable force in the Street Stock division.  Combining their 2020 and 2021 results, L’Etoile and the #8 team posted 6 wins, 26 top-5, and 28 top-10 finishes in 29 races, including a total of 20 podium finishes.  While L’Etoile was a dominant factor, Chris Meyer and the #87 team were just as consistently fast as L’Etoile with the final margin in the 2021 standings being only 14 points, or 7 positions on the track.  L’Etoile and Meyer had six 1-2 finishes this season with L’Etoile and Meyer each winning 3 times.  Despite being so close to one another all season long, L’Etoile says that things never got stressful and he enjoyed the stiff competition from Meyer. 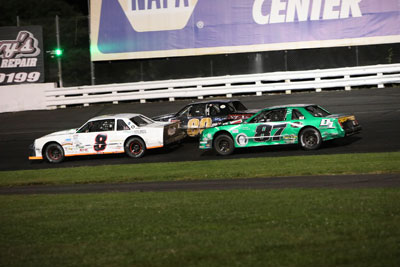 “I wouldn’t really say it was stressful at all,” said L’Etoile.  “You know you can race hard with Chris and you know that as hard as you’re racing together, you’re not going to wipe each other out.  It was a lot of fun racing with him and there’s a handful of guys that I trust to race with like that and Chris is definitely one of those guys.  We usually started right next to each other every week and it was kind of like following the leader in a way.  Whenever Chris would start in front of us, he was always real quick at the start of races and he would make impressive moves like passing four cars in a lap on the high side and I knew I had to keep up with him.  If I started in front of Chris, I knew I had to go and get to the front because track position is huge and I knew he would be on me and pushing me.  I think we both pushed each other to a high level.” 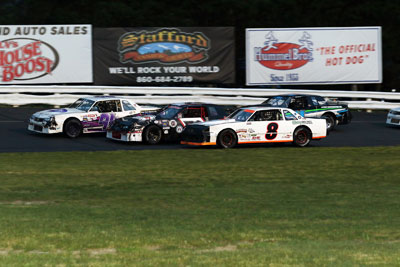 With a third championship now under his belt, L’Etoile is unsure about his plans for the 2022 season.  During the 2021 season, L’Etoile and his father purchased an open modified car and they’re looking to either run that car during the 2022 season, or L’Etoile could return to the Street Stock division and defend his track title.

“We don’t really know about our plans for next season yet,” said L’Etoile.  “We have an open modified and we’re hoping to do between 5-10 races if we can find some good shows to run.  We’d love to run the open shows at Stafford but we couldn’t do that this year because it would have been too much for us to focus on the Street Stock as well as run the modified.  I know and love the Street Stocks so that’s the tough part if I’m not going to be racing a Street Stock anymore.  Plus Bill Staves put me in his car for one race last year and he hasn’t been able to get back into it yet.  It’ll all be up to Bill on what he wants to do but I’d like to see him back behind the wheel and having fun.”