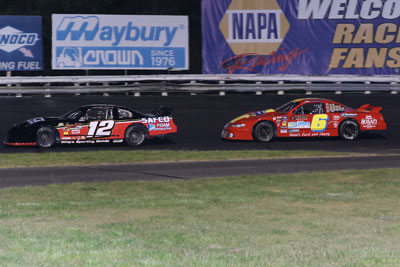 (Stafford Springs, CT)—The 2020 season at Stafford Speedway saw a 3-way title fight between Andrew Durand, Alexandra Fearn, and Jeremy Lavoie that was only settled by a tie-breaker margin at season’s end.  Durand and Fearn each compiled 652 points with Lavoie a further 16 points behind, and Durand won the championship thanks to a 7-3 advantage over Fearn in feature victories.  Fast forward one year and Fearn and Lavoie are once again right in the thick of a tight championship race with Fearn and the #12 SAFCO Foam team leading Lavoie and the #6 L & S Equipment team by 12 points heading into the final 3 races.

Both Fearn and Lavoie have been about as consistent as possible this season with Fearn scoring 16 top-5 finishes in the first 17 races while Lavoie has finished all 17 races thus far in the top-5.  The difference between the two drivers comes in the win column, with Fearn currently holding a 5-1 advantage over Lavoie in that department. 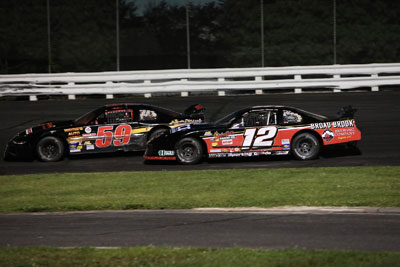 “It’s been a pretty good season for us so far,” said Fearn.  “Our performance this year is the culmination of a lot of hard work and it’s definitely something that everyone on the team can be proud of.”

“The season has been, all in all, not a bad year,” said Lavoie.  “We’ve been very consistent, I think our worst finish this season has been fifth, we just couldn’t get the podium finishes and wins that we wanted to get to rack up points.  The nights where Alexandra was winning races, we were finishing fourth or fifth, so that’s where we were giving up a lot of points.  We’re kind of hard on ourselves so in that respect it’s been a bit of a roller coaster season.  We’ve been able to keep the car in one piece all year long, we just haven’t been able to capitalize when opportunity strikes this season.” 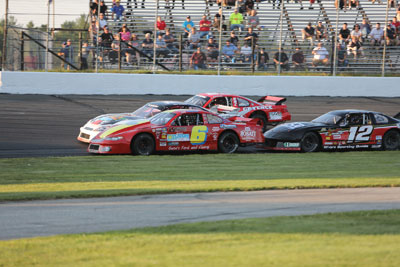 Fearn closed out her 2020 campaign with a pair of second place finishes followed by a win in the season ending race and she has carried that performance over to the 2021 season.

“I think this season has been a continuation of the momentum we had from winning the last race last season,” said Fearn.  “We show up to win so that’s our priority.  We had an incident a few weeks ago on the last lap of the race that was incredibly frustrating because it put us in a bad spot.  We couldn’t afford to hang our heads and we just picked up the pieces and moved on.  Our focus is winning races and everything else comes second after that.  I’ve been trying to not worry about points because there’s nothing to gain by worrying about focusing on points when we can focus on winning.  I owe it to myself and everyone on this team that helps me out to go out there every week and give it my best effort.” 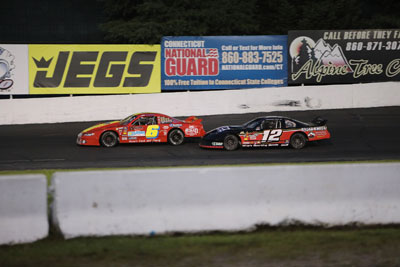 Lavoie scored 2 wins and co-led the division with 13 top-5 finishes in 14 races, but he and his team have been fighting a handling issue with their #6 car all season long that has prevented them from turning their top-5 runs into wins.

“We’ve been battling a tight car, especially in the center of the corner all season long,” said Lavoie.  “With the car being tight in the center of the corner, I have a lack of bite coming out of the corner, which costs us a couple of tenths in lap time.  In the Limited Late Model division, you can’t afford to give up a tenth of a second, never mind a couple tenths.  The competition has been very tough this season.  We’ve had 8 different winners and three first time winners with Mike Hopkins, Matt Scappini, and Devon Jencik, so things are tight and I think we’ve put on some very good shows this season for the fans.  We could just never seem to hit the setup just right, we were always lacking something.” 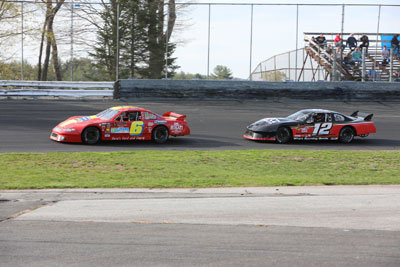 With only 3 more races on the schedule, Lavoie has no option other than to go all out for wins while Fearn must simply continue to do what she has done all season long.

“We just have to do the best that we can,” said Fearn.  “I’m not going to try to set the world on fire, I’m just going to keep things realistic and try to complete all the laps.  We usually run pretty well at this time of the year so hopefully we can keep everything together and click off at least one more win before the season ends.”

“We’re definitely going to throw everything we can at it and hope for the best,” said Lavoie.  “It’s definitely going to come down to the wire.  I think Alexandra would have to have 3 bad races in a row for us to catch her so at this point it’s basically hers to win, but you never know when it comes to racing.  We’re going to throw a Hail Mary and see what happens.    If we end up finishing second, it’s still been a fantastic season for us.” 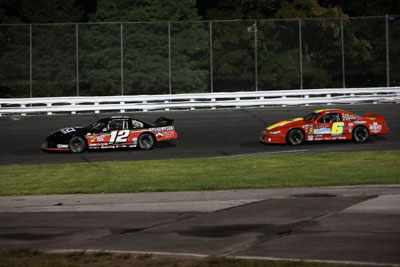 “It would definitely mean a lot to me and everyone on the team,” said Fearn.  “We’ve always been able to win races but it’s a little different when you’re able to be a contender every single week.  I think my team deserves the championship, especially after coming so close last season.  To be able to come back from that and get the job done would be really special for us.  Races are won in the shop during the week so big thanks to everyone who works on this car and I always look forward to being able to stand together with everyone in victory lane.”