(Stafford Springs, CT)—Stafford Speedway hosted the biggest and richest SK Modified® race of the 2021 season on Friday, June 25 with the 8th Annual NAPA Auto Parts SK 5k.  Michael Christopher, Jr., who won $5,000 only 2 weeks ago in the TickMike.com All-Star Shoot Out, took the checkered flag to take home a total of $5,725 in purse and contingency money.  Christopher won $5,000 from the race purse, $450 from contingency partners Maybury Material Handling, North East Race Cars, and TickMike.com, a $25 gas certificate from New England Racing Fuel, Sunoco Brand, and a $250 bonus from Wheelers Auto for winning his heat race.  Other feature wins on the night were scored by Andrew Molleur, who was a first time winner in Late Model competition at Stafford, Tyler Chapman in the SK Light feature, Rich Hammann was a photo finish winner in a duel with Alexandra Fearn in the Limited Late Model feature, and Nickolas Hovey was a first time winner in the Street Stock feature. 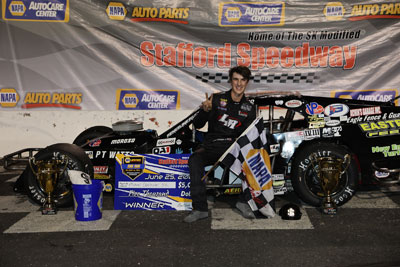 In the 100-lap NAPA Auto Parts SK 5K feature event, Marcello Rufrano went by Tyler Leary on the start to take the early race lead.  Leary slotted into second but he took the lead from Rufrano on lap-4 only to lose it back to Rufrano on lap-6.  Todd Owen was running in third followed by Michael Gervais, Jr. and Michael Christopher, Jr.  Chase Dowling was sixth in line followed by Andrew Molleur, Stephen Kopcik, Teddy Hodgdon, and Matt Vassar.

Rufrano held the lead until lap-16 when Leary went back to the front.  Owen was still third with Christopher now fourth and Gervais fifth.  Owen took second from Rufrano on lap-17 and Christopher pulled alongside Molleur for third and he was able to complete the pass on lap-19.  With 25 laps complete, the order was Leary, Owen, Christopher, Gervais, Kopcik, Dowling, Molleur, Rufrano, Vassar, and Jon Puleo.

Owen hounded Leary for several laps racing for the lead before he was finally able to make a pass on lap-36.  Christopher was still third with Gervais in fourth.  Behind Gervais was a three car train of Kopcik, Dowling, and Molleur.

At the halfway point of the race, Owen was still in the lead, but Christopher was up to second and Gervais third as Leary fell back to fourth in line.  Dowling was still fifth with Kopcik, Puleo, Molleur, Hodgdon, and Rufrano making up the top-10.

With 20 laps to go, Christopher was comfortably in command over Owen, Dowling, Gervais, Kopcik, Puleo, Molleur, Hodgdon, Bryan Narducci, and Keith Rocco.  Tyler Leary spun coming out of turn 2 to bring the caution out for the first time with 90 laps complete.

Christopher took the lead on the restart with Owen going side by side with Dowling for second before taking the position on lap-91.  Kopcik was on the charge and he took second from Owen on lap-93 with Dowling coming up to third to drop Owen back to fourth with Molleur in fifth.  Kopcik made a bid for the lead and completed a pass for the lead on lap-97 but that was negated by the caution flag for spins in turn 1 by Rufrano, Hodgdon, Doug Meservey, Jr., and Puleo, which set the lineup back to lap-96.

Christopher and Kopcik went side by side for the lead on the restart with Dowling and Owen behind them.  Christopher held the lead by a nose at the line for 2 laps before getting clear to the lead on lap-99.  Kopcik took one last look but couldn’t get close enough to Christopher to make a move as Christopher took the checkered flag.  Dowling finished third with Owen and Molleur rounding out the top-5. 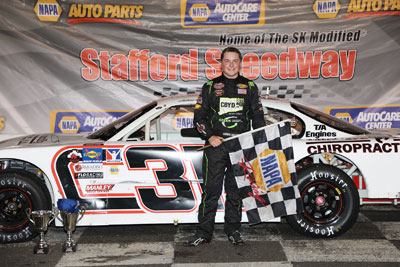 In the 30-lap Late Model feature event, Rick Lanagan took the lead at the green with Andrew Molleur right behind him in second.  Tom Fearn took third with Andrew Durand in fourth and Kevin Gambacorta in fifth.  Molleur took the lead from Lanagan on lap-2 and Lanagan would fall back to fifth in line as Fearn moved up to second, Durand third, and Gambacorta fourth.  Wayne Coury, Jr. spun in the middle of turns 3+4 to bring the caution out with 5 laps complete.

On the restart, Tom Butler’s car came to a stop in turn 3 with smoke pouring from under the hood to bring the caution back out before another lap could be completed.

Molleur took the lead on the restart with Tom Fearn in second.  Durand was third followed by Gambacorta and Darrell Keane.  Gambacorta went around Durand on lap-9 to move into third and that move opened the door for Keane to follow Gambacorta by Durand to take fourth and drop Durand back to fifth in line.

Adam Gray was sixth in line and he took fifth from Durand on lap-12.  Paul Arute and Zack Robinson both spun in the middle of turns 1+2 to bring the caution out with 12 laps complete.

Molleur took the lead on the restart while Tom Fearn got sideways coming out of turn 2 but was able to save the car and keep on going in second place.  Gambacorta took second from Tom Fearn on lap-14 and Gray followed him by to take third and drop Fearn back to fourth, just in front of Keane.

Molleur didn’t come up to speed on the restart as Gray streaked into the lead but that was all nullified by the caution flag as Bennett spun on the backstretch with several other cars involved.

The next restart saw Molleur come up to speed just fine as he maintained the lead but Robinson and Duane Provost both took hard hits into the turn 3 wall to bring the caution and red flags out.  Also collected were the cars of Jim Mavlouganes and Arute.

Molleur took the lead on the restart but only one lap was completed before John Blake got into the turn 2 wall and Tom Fearn spun in turn 2 and collected the car of Gambacorta to bring the caution back out.

The next restart saw Bennett and Keane spin on the backstretch to bring the caution back out and set up another attempt at a green white checkered finish.

Molleur took the lead with Ryan Fearn moving up to second.  Molleur held on to pick up his first career Late Model feature win at Stafford.  Wayne Coury, Jr. made a 3-wide move on the final lap to steal third place with Gray finishing fourth and Michael Wray finishing fifth. 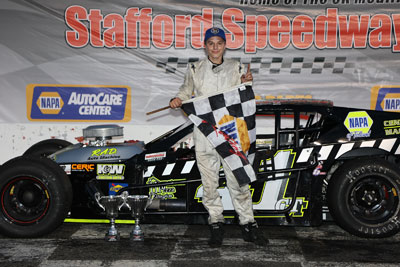 In the 20-lap SK Light feature event, a multicar melee on the opening lap in turn 3 involving the cars of Tyler Barry, Brian Sullivan, Josh Carey, George Bessette, and Glenn Bartkowski brought the caution out before a lap could be completed.

Meghan Fuller took the lead on the restart with Amanda West behind her in second.  West nearly took the lead from Fuller on the first lap but settled back into second.  West would fall back to fourth on lap-3 as Tyler Chapman moved up to second and Steven Chapman took third.  Derek Debbis was up to fifth and he was challenging West for fourth place on lap-4 but the caution flew with 5 laps complete for a spin through the frontstretch infield by Josh Carey.

Tyler Chapman took the lead from Fuller on the restart with Fuller and Steven Chapman going side by side for second.  Anthony Bello was up to fourth and Alexander Pearl was fifth in line.  The order shifted on lap-10 as Steven Chapman took second and Bello took third to drop Fuller back to fourth, just in front of Debbis as Tyler Chapman continued to lead.  West spun on the backstretch to bring the caution back out with 11 laps complete.

Tyler Chapman took the lead on the restart with Bello in second and his brother Steven holding off Debbis for third.  Steven Chapman got by Bello on lap-13 to move into second while Debbis followed him by Bello to move into third and drop Bello back to fourth.  West spun on the frontstretch coming out of turn 4 to bring the caution out with 14 laps complete.

In the 20-lap Limited Late Model feature, Devon Jencik took the lead the green with Damian Palardy slotting into second behind him.  Jay Clement spun on the frontstretch and Mike Hopkins was also involved to bring the caution flag out with 1 lap complete.

Fearn caught up to Patnode on lap-8 and she made her move for the lead with a pass in turn 3 on lap-9.  Hammann was third in line behind Fearn and Patnode with Matt Clement fourth and Lavoie fifth.

Hammann closed in on Fearn’s back bumper for the final lap and as the two leaders went through turns 3+4, Hammann was able to get to the inside of Fearn coming to the checkered flag.  The two cars drag raced to the start/finish line with Hammann beating Fearn by no more than several inches in a photo finish.  Patnode finished third with Matt Clement and Lavoie rounding out the top-5. 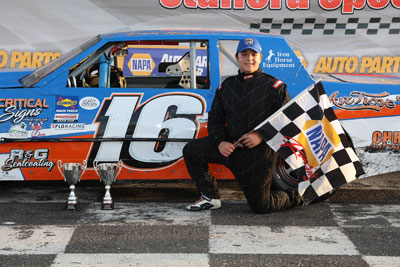 In the 20-lap Street Stock feature, Kyle Johnson took the early lead at the drop of the green flag with Bert Ouellette quickly working his way into second.  Nickolas Hovey moved up to third with Travis Hydar right behind him in fourth.  Travis Downey was fifth in line with Chris Meyer already up to sixth on lap-6.  Johnson’s car took a sudden turn to the right and he hit the turn 2 wall to bring the caution out with 7 laps complete.  Johnson’s misfortune handed the race lead over to Ouellette with Hovey to his outside for the restart.

On the restart, Ouellette got sideways and spun in the middle of turns 1+2 which collected the cars of David Macha, Sr., Tyler Trott, Samantha Dell, Bobby Stirk, III, and Marvin Minkler to bring the caution flag right back out.  With Ouellette out of the race, Hovey inherited the lead with Hydar to his outside for the next restart.

Hovey took the lead on the restart with Meyer working his way into second.  Hydar was third in line followed by Adrien Paradis, III in fourth and Downey in fifth.  Frank L’Etoile, Jr. stalled and came to a stop on the backstretch to bring the caution flag back out with 10 laps complete.

Hovey took the lead on the restart while Hydar pulled alongside Meyer for second and then took second from Meyer on lap-11.  Downey and Paradis were side by side for fourth place with Paradis taking the spot after several laps of side by side racing.  The caution came back out with 17 laps complete for spins in the middle of turns 3+4 by John Orsini and Dell to set up a 3 lap sprint to the checkered flag.

Meyer nearly went 3 wide with Hovey and Hydar on the restart but settled back into third.  Meyer made his move to take second from Hydar as the cars completed lap-18.  Meyer couldn’t catch Hovey as Hovey scored his first career Street Stock victory at Stafford.  Hydar finished third with Paradis and Downey rounding out the top-5.  In post race inspection Hydar’s car was found to be 3 pounds underweight so he was penalized 3 positions back to sixth place, making the new top-5 Hovey, Meyer, Paradis, Downey, and Stirk.