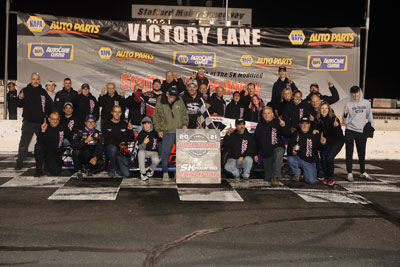 (Stafford Springs, CT)—After having finished in the top-10 of the Stafford Speedway SK Modified® points standings every year since 2003, including three runner-up finishes, Todd Owen finally won a long sought after track championship.  Owen and the #81 Cooker Construction team notched 15 top-5 and 18 top-10 finishes with 3 victories that resulted in a first career championship at Stafford.

“It feels good and I finally accomplished a goal I set out to achieve a long time ago,” said Owen.  “It’s still kind of surreal, it really hasn’t set in yet but every time for at least another year, whenever I click on the website or something I get to see myself as the SK Modified® champion.  I think our performance proved we have a good combination going with the car and the motor and the whole shop, not just myself, was going good.  I think my experience helped me in situations where maybe it was ok to give up a spot or two in order to finish a race.  Maybe that’s not being aggressive, but any time you can bring your car home in the top-5 it’s a great night.” 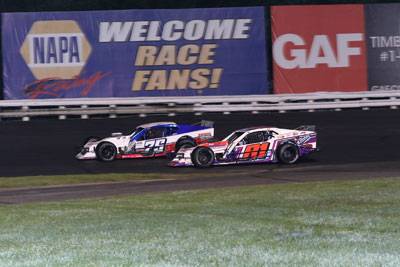 While many competitors purchase parts and pieces for their race cars, Owen and his Chassis Pro team build everything in house.  Not only did Owen win the SK Modified® championship this season, but Derek Debbis won the SK Light championship driving a Chassis Pro car, which brings with it some extra satisfaction for Owen and everyone in his shop.

“Definitely there’s some extra satisfaction,” said Owen.  “There’s not many people who build everything in house like we do.  I get a special feeling if I’m winning or someone else is winning in our cars whether it’s Derek [Debbis] or David [Arute] or you see Toast [Doug Meservey, Jr.] running up front.  Bob Charland had I think his best points finish ever this year and Chris Matthews and Norm Sears were also running well in our cars so it was a great year all the way around for Chassis Pro cars.” 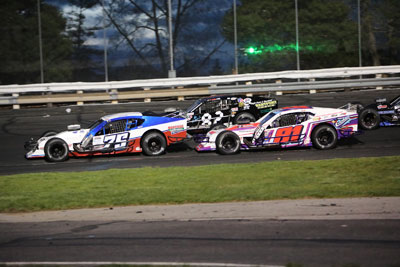 Owen began the 2021 season with a 9th place finish, but top-4 finishes in the next 5 races vaulted him to the top of the standings.  Owen lost the point lead following the June 4 SK Modified® feature event and he spent the months of June and July chasing after Stephen Kopcik in the standings.  Owen would retake the point lead following the July 30 feature event and he held on to the top spot for the remainder of the season.

“I thought we were in the mix all year showing consistency,” said Owen.  “Looking at the top-5 finishes we had, if you’re always finishing in the top-5 I think you’ll put yourself in a good spot.  I don’t think you can focus on points but it’s definitely something that you have to pay attention to if the championship is what your year long goal is.  Obviously there were a couple other guys who were there all year long so we just had to make sure we finished in the top-5.  If not for the last race of the season, we would have pretty much finished almost every race in the top-10, which is a huge accomplishment for our team.  We’ve paid attention to the points for a long, long time and always seemed to come up just a point or two or a missed shift short.  To finally have things work out for us, it wasn’t a runaway and it came down to the end, so it was a great year.” 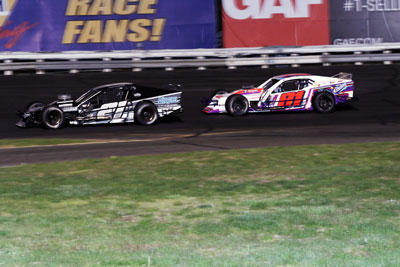 While Owen was a model of consistency finishing in the top-5 just about every Friday night, Kopcik was staying right with Owen in the standings and a late season 3-race winning streak threatened to once again see Owen come up just short of the championship.

“Those guys definitely didn’t go away and they’re not going to be going away any time soon,” said Owen.  “They’re a top notch team and they came with a loaded gun for sure and showed they had speed all year long.  The pressure was always on but now I feel like the pressure will be a lot less moving forward because when you’ve always wanted to accomplish something, not that I don’t want to win the championship again, but it’s kind of like winning your first race.  I fought for a long time to win a championship at Stafford and now that I have one, yes I want to win another one, but it’s something that I can always say I did.  You never know when it’s going to be your time and this year was our time.” 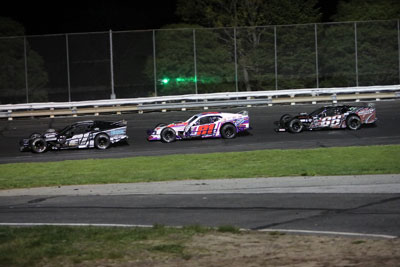 As strong as Owen and the #81 team were during the 2021 season with an average finish of 5.1, Owen says there’s always room for improvements and he and the Chassis Pro team will be looking for ways to make their car even faster while their fellow competitors are also busy during the winter months searching for more speed.

“There’s definitely room for improvement,” said Owen.  “You always have to keep on working and trying to get faster and faster while staying up on technology.  You can’t just sit back on your laurels and think since we won the championship we’re going to be good again next season.  Everyone else is at home working hard but I think we have a good baseline to start off with in 2022 and hopefully we can run as strong as we did this year.  It’s nice to take a break right now but this championship will be a great shot of morale for everyone in the shop this winter and everyone will be excited to get started back up in April.  We’re going to try to do the same thing we did this year.  Thanks to Cooker Construction, Chassis Pro, R.A.D. Auto Machine, Start/Finish Motorsports, there’s so many names to mention, and everyone on the crew who’s been with me for a long time.  It takes a team to win a championship and not just one guy.  We all work together in the shop and this championship was more of a shop championship rather than just my team’s championship.  It’s exciting for all of us.”