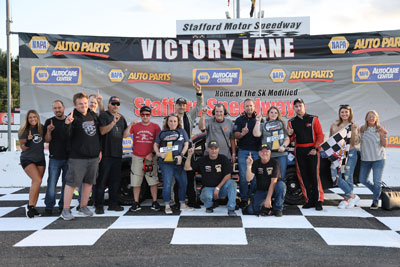 (Stafford Springs, CT)—Fresh off of two consecutive Street Stock championships and 10 feature wins in 2019 and 2020 at
Stafford Speedway, Zack Robinson made the move up the ladder to the Late Model division for the 2021 season.  The driver of the #89 Lathrop Vending Chevrolet posted a win to go along with 5 top-10 finishes on his way to claiming NAPA Auto Parts Late Model Rookie of the Year honors.

“It feels great to be the Rookie of the Year,” said Robinson.  “Going into the season I didn’t really have any expectations.  I knew it was going to be a challenge going against some of the best of the best who have been at Stafford for a while so I set my standards pretty low.  I wasn’t expecting to win and when we pulled off our win, it felt really good.  We had a good car that night and all the pieces of the puzzle fell our way.  We struggled during the season for the most part trying to figure out what the car wanted and what I wanted and we haven’t figured that out just yet.  Big thanks to Lathrop Vending, JET Electric, JSB, and everyone else who was involved with helping us out this season.” 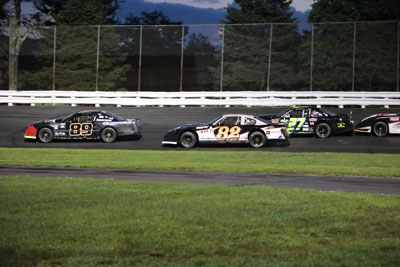 The 2019 and 2020 seasons saw Robinson as one of the dominant Street Stock drivers at Stafford with 10 wins, 28 top-5, and 32 top-10 finishes in 35 races during his two championship winning seasons.  Robinson found success much harder to come by during his rookie campaign as he didn’t record his first Late Model top-10 finish until midway through the 2021 season with an 8th place finish on July 23.  He followed up his 8th place finish with a victory on July 30 but struggled to replicate those finishes in the second half of the season although he did post 3 more top-10 finishes.  Robinson didn’t let his struggles get him down, but in the second half of the season after he had won, the lack of results started to wear on him. 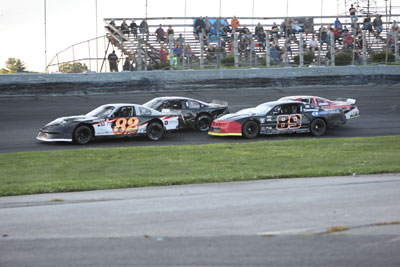 “They say that in racing for every couple good years you have you’re going to have a bad year and I think this year was kind of our off-year,” said Robinson.  “I’m hoping that we got all our bad luck out of the way.  When I first got started in the Street Stock division we had a couple years of bad luck before we really started to get a hold on things.  We had a motor and a transmission go bad on us this year and we had a few nights where we got tore up just being in the wrong place at the wrong time.  During the middle of the season when we got our win, I was hoping we could stay there and at least be able to contend for wins.  But every week we were finishing just outside the top-10 so it started to get a little aggravating because I wasn’t sure if it was me, if it was the car, or just what we were missing.  The plan for next year is to have the car ready to go at the top of its game so it will all come down to me as the driver.” 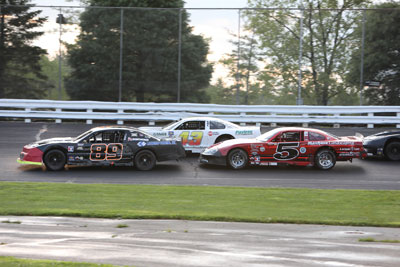 Robinson’s victory came as a huge surprise for the team.  With their first half season struggles, Robinson was hoping to use the victory as a launching point for bigger and better things in the second half of the year, but he and the team struggled to get their car to work as well as it did that night.

“That win was just what we were hoping for and it gave us a lot of confidence for the second half of the season,” said Robinson.  “I was happy and I thought we found something with the car and we noted everything like stagger and angles, and for weeks after that we kept going back to that setup but for some reason it was hit or miss.  That was our one night where it worked and we couldn’t make it work after that.  The Late Models are a tough division and you have to be on your game every week.  You could be the fastest car in practice only to have an 8th place car in the race because there’s so many good guys out there and everyone is so close.” 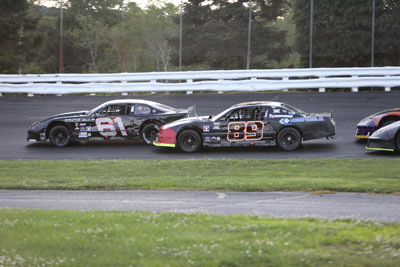 With a year’s worth of experience behind him now, Robinson already has ideas on how he can improve his #89 car for the 2022 season but he is unsure of how often he will be able to race due to his work schedule.

“We’re going to take a look at our notes and see what nights the car was good and we know there’s some things in the front end geometry we can change to make the car better,” said Robinson.  “We need to get the motor upgraded because our motor is down on horsepower after we had the motor go bad on us earlier in the year.  I think this year if I can do it with my work schedule, we need to throw all of our tokens in the basket and go for it.  I’m definitely planning on coming back to the Late Model division, I just don’t know if it’s going to be full time or not.  I have a little bit of time to get that figured out.