(Stafford Springs, CT)— It may only be December but over 15 teams have already registered to compete in the 50th running of the NAPA Auto Parts Spring Sizzler scheduled for April 23 and 24, 2022. A mix of Stafford regulars and Stafford invaders highlight the early entries including 2021 Spring Sizzler winner Patrick Emerling and 2015 Spring Sizzler winner and hometown hero Woody Pitkat.

The 50th running of the Spring Sizzler is slated to be the biggest Modified event ever held at Stafford Speedway with over $130,000 in prize money on the line. The winner of Sizzler is guaranteed to win $15,000 but could go home with winnings in excess of $30,000 after bonuses and lap money. Race fans can support the Spring Sizzler by sponsoring a lap, all lap sponsors will receive a Limited Edition 50th Spring Sizzler poster. 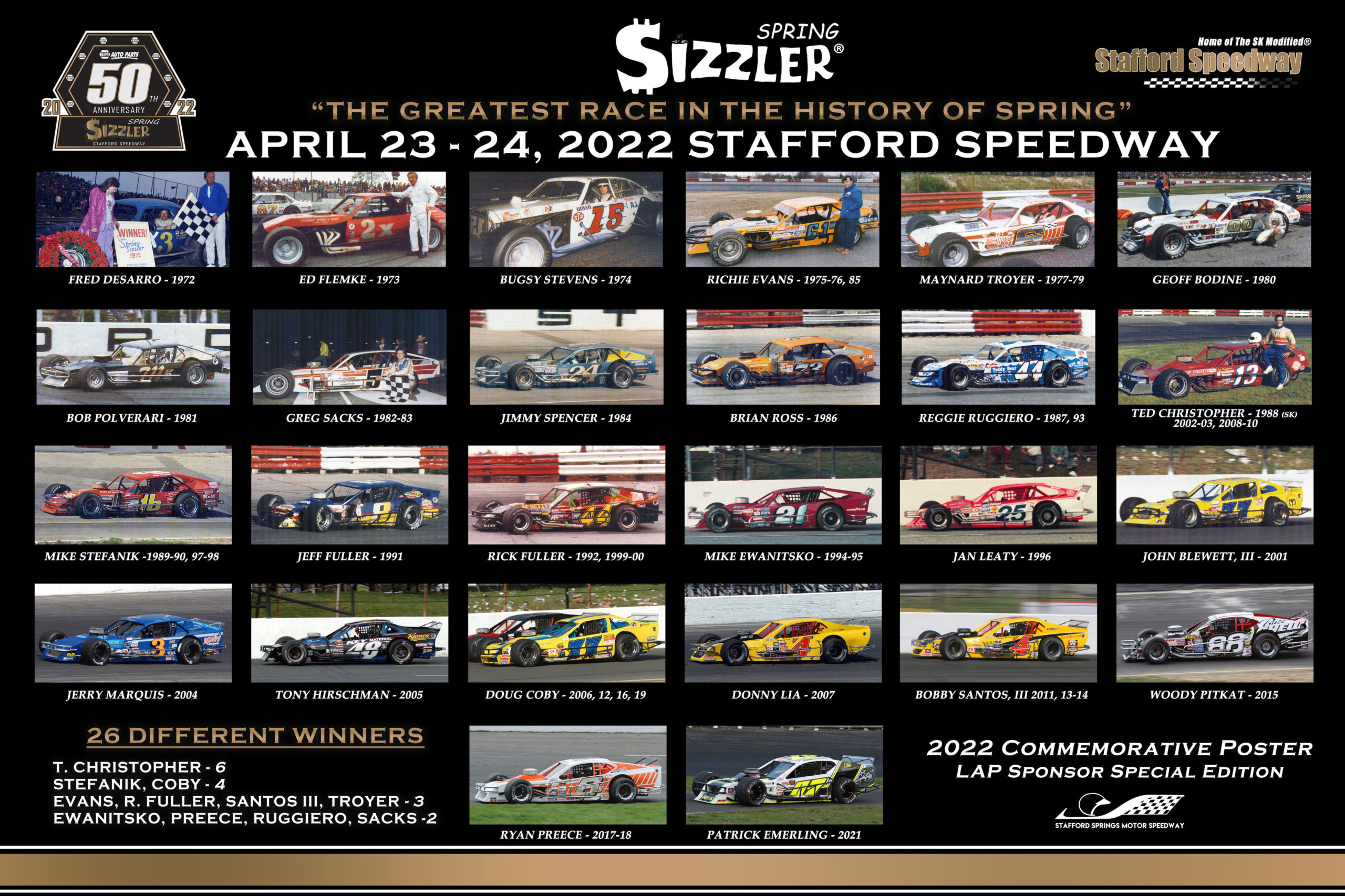 Race fans are encouraged to stay tuned to staffordspeedway.com and Stafford Speedway’s social media accounts as more entries are received. Click here for the current entry-list for the 50th Spring Sizzler. 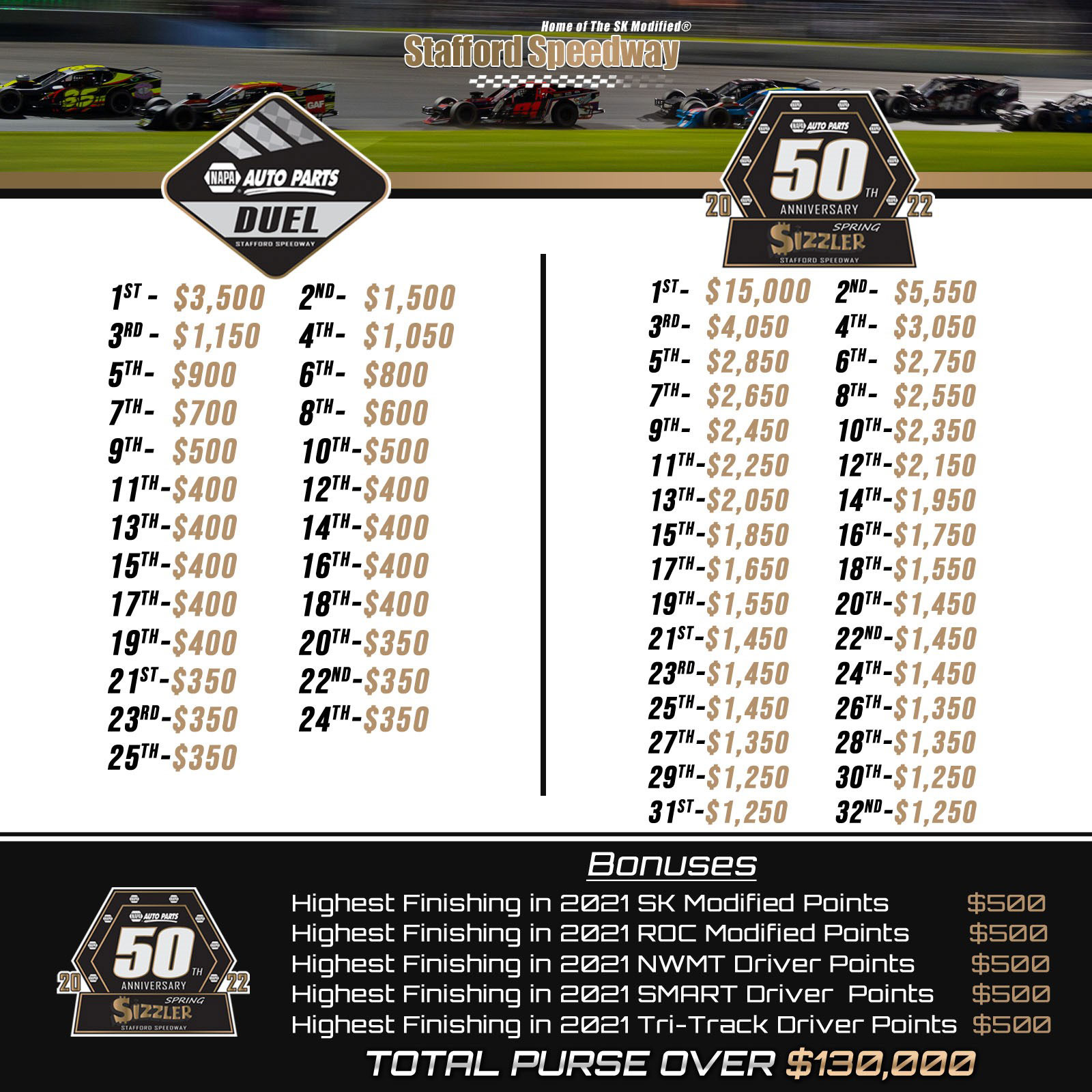 Race teams expecting to compete in the 2022 Spring Sizzler can register for the event online at staffordspeedway.com/store. Early entries will be featured on Stafford Speedway’s social media channels through the road to the Sizzler video series.

Take a quick look at the 17 early entries for the Spring Sizzler:

Andy Jankowiak – #0 Steve Park’s Batteries & Bulbs Chevrolet – Jankowiak will be looking to make his Sizzler debut.  Jankowiak is a regular winner on the Race of Champions Modified Tour as well as the Indoor Auto Racing Championship Series, where he is the defending Series champion and 2-time defending champion of the Atlantic City indoor event.

Patrick Emerling – #1 Superior Refinishing Chevrolet – Emerling is the defending champion of the NAPA Spring Sizzler, which is thus far his only Stafford victory.  Emerling ran 3 open races in 2020 with the #1 team owned by Ted Anderson with a best finish of 3rd.

Driver T-B-A – #6 Mertz Racing Chevrolet – Although the driver for Stan Mertz’s #6 car is still to be determined, Mertz’s car won the Twisted Tea 80 in 2020 and finished second in the 2021 Bud Light 80 with Woody Pitkat behind the wheel.

Chase Dowling – #9ct S & S Asphalt Paving Chevrolet – Dowling has been the man to beat at Stafford since hooking up with Ben Dodge and the #9ct team.  Dowling won the Tri-Track Modified Series CBYD 81 race in October 2020 and then won the Twisted Tea 80 and Bud Light 80 in 2021.  Dowling also has a Modified Racing Series win in 2019, 9 SK Modified® wins, and 7 SK Light wins in his Stafford career.

Mikey Flynn – #24 Place Motors Chevrolet – Flynn raced SK Lights from 2017-2019 before moving up to the SK Modified® division in 2020.  Flynn made his open modified debut at Stafford in the Bud Light 80 this past July and finished 18th.  Flynn is still in search of his first modified win at Stafford.

Buddy Charette – #28 Polar Beverages Chevrolet – Charette is a relative newcomer to Stafford, having only run 5 SK Light races during the 2020 season.  Charette moved up to open modified competition in 2021 with a best finish of second place in the Thompson 300.

Anthony Sesely – #44 Kluth Motorsports Chevrolet – Sesely is a multi-time feature winner and former track champion at Wall Stadium as well as being a multi-time winner of the Atlantic City Gambler’s Classic indoor race.  Sesely has made 2 career NAPA Spring Sizzler starts with a best finish of 15th in 2008.

Marcello Rufrano – #48 Wheelers Auto Service Chevrolet – Rufrano won his very first modified race at Stafford in the SK Light division in 2016 and he has since won 11 SK Light races and the 2018 SK Light Championship to go along with 2 Street Stock victories.  Rufrano won the Bud Light Open 80 in 2020 and is looking for his second open modified win.

Eric Goodale – #58 GAF Roofing Chevrolet – The Whelen Modified Tour veteran was the runner-up in the 2021 NAPA Spring Sizzler on April 30 and he has 2 career wins at Stafford; the 2017 NAPA Fall Final and the 2018 Bud Light Open 80.

Todd Owen – #81 Cooker Construction Chevrolet – The 2021 SK Modified® track champion at Stafford has 7 career Pro Stock and 17 career SK Modified® victories to his name.  Owen has competed in 9 of the 11 Open Modified races held at Stafford with a best finish of 2nd in 2019.

Woody Pitkat – #88 Dunleavy’s Truck and Trailer Repair Chevrolet – With 78 career wins at Stafford, Pitkat ranks second behind only Ted Christopher.  Pitkat is a former 3-time track champion at Stafford, winning Late Model titles in 2006 and 2012 and the SK Modified® championship in 2013.  Pitkat won the 2015 NAPA Spring Sizzler and he won the 2020 Twisted Tea Open 80.