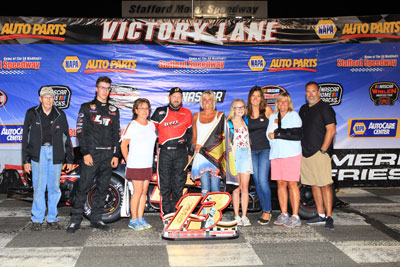 (Stafford Springs, CT)—For the 3rd consecutive season, Stafford Motor Speedway will pay tribute to one of its greatest champions with the TC 13 Shootout in memory of Ted Christopher this Friday night, September 11.  Christopher made the number 13 famous at Stafford, taking that car number to 109 SK Modified® wins and 9 track championships.  This Friday night will see the number 13 back in the spotlight with the top-13 finishers from the 40-lap SK Modified® feature event transferring into the TC 13 Shootout, a 13-lap race that will pay the winner $1,313 thanks to contributions from event partners Justin & Tabitha Manafort, Greg and Venetta Narducci of the Florida Connection, Big Haus USA Racing Products, Gaston Racing Enterprises, Hoosier Tire East with Rob Summers, LifeCare Family Chiropractic with Dr. Sean Noel, New England Racing Fuel with Johh Holland and Mike Joy, the Tri-Track Modified Series, John and Maina Rufrano with Wheelers Auto, and anonymous donors.  Glen Reen won the Inaugural TC 13 Shootout in 2018 and Keith Rocco won last year’s TC 13 Shootout.

“We’re excited to host the 3rd Annual TC 13 Shootout,” explained Stafford Speedway CEO Mark Arute.  “We can’t thank those who have supported the purse enough, without their support the event is not possible. Between this event and the amazing work Quinn Christopher did this season with the Ted Christopher Safety initiative Teddy’s legacy lives on.” 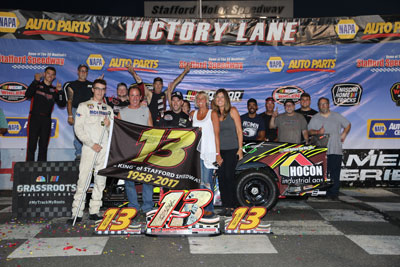 Christopher ranks as one of, if not the greatest, champions in the long and storied history of Stafford Motor Speedway.  Christopher made his Stafford debut in 1983 driving in the SK Modified® division and although it took him several seasons before he scored his first win in 1986, once he got his first win he continued winning at an amazing rate through the 2017 season.  Christopher scored at least 1 SK Modified® feature victory every year from 1986 through 2014, which was a 29 year winning streak.  Christopher’s 131 career Stafford wins are a track record with his 131 wins spread out over 6 different divisions.  Christopher won races in the SK Modified®, ProStock, Whelen Modified Tour, Valenti Modified Racing Series, Busch North Series, and Pro All-Stars Series.

“Teddy is missed everyday,” continued Arute. “When we came up with this event we were looking to develop a race that we could hold each year in his honor. The race has really taken a life of its own and serves as a great memorial for TC. He’s an important part of Stafford’s history and will never be forgotten.”

This Friday night, September 11, the TC 13 SK Modified® Shootout and regularly scheduled 40-lap SK Modified® feature will be paired with Stafford’s Late Models, SK Lights, Limited Late Models, and Street Stocks for a full night of NASCAR Weekly Racing.  Tickets are priced at $20.00 for adult general admission, $5.00 for children ages 6-14, and children ages 5 and under are admitted free of charge when accompanied by an adult. Paddock passes are $40 and all tickets for this event are available for purchase now at www.staffordspeedway.com.  Don’t wait, most events have sold out.  If tickets are sold the day of the event the price increases $5 at the gates.

Any fans who can’t make the race in person can watch a live stream of the entire evening starting at 6pm with qualifying heats all the way through the final feature event of the night on www.staffordspeedway.tv for only $20.