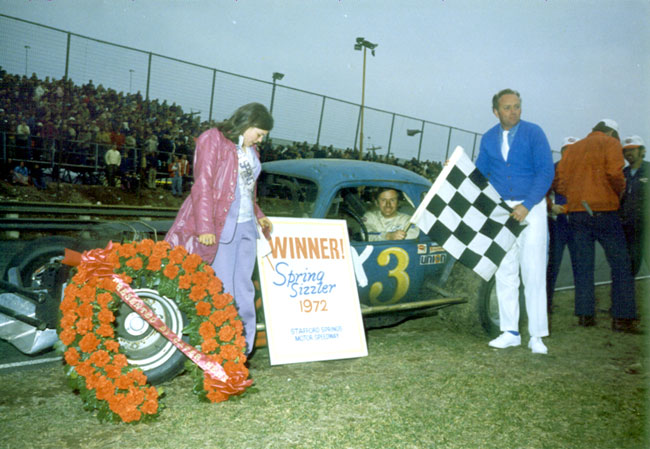 (Stafford Springs, CT)—In 1998, NASCAR celebrated its 50th anniversary.  Among the many pomp and circumstance celebrations of the golden anniversary of NASCAR was the “50 Greatest Modified Drivers” program that was instituted by Stafford Speedway.  The 50 Greatest program allowed fans to go to www.staffordspeedway.com and place their votes for who they felt were the 50 greatest modified drivers of all-time.

Over the next several weeks Stafford will be revisiting the 50 Greatest Modified Drivers list with a daily bio celebrating each driver’s accomplishments and exploits. The daily bios of each driver will be posted on Stafford’s website, Facebook, and Twitter pages.  A new banner has been designed to be interactive and allow fans to scan a QR code next to each driver which will bring up their bio and a photo collage.  The new banner will be placed at the same location as the current banner on the backside of the Stafford Tech building behind the Ted Christopher section of the main grandstand.

“We take pride in preserving and remembering the history of modified racing,” said Stafford COO Paul Arute.  “The 50 Greatest Modified Drivers list is a great tribute to the very best to ever sit behind the wheel of a modified race car not only at Stafford Speedway, but in all of modified racing. We’re all really excited about the new banner. David [Arute] designed an interactive banner that incorporates QR codes to allow fans to pull up information about each driver on their phone. Fan interaction, especially digitally, is one of our focuses so keep an eye out for more cool things for fans.”

The 50 Greatest list ranges from drivers that are well known in modified racing circles such as Bodine, Christopher, Evans, and Stefanik to old school drivers such as Rene Charland, Pete Corey, Ernie Gahan, and Ollie Silva.

“We’re looking into how we can expand the 50 Greatest list,” continued Arute.  “In the last 22 years since the list was first compiled there have definitely been some drivers that are worthy of being included.  We’re in discussion as to how many drivers we should add to the list and the best way we can go about including race fans’ input as to who should get the nod to be added as a Greatest Modified Driver of All-Time.”