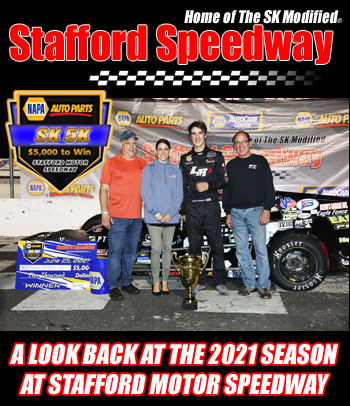 The 2021 season marked year 8 of the partnership between NAPA Auto Parts and Stafford Speedway.  Before the 2021 season began in April, it was announced that the track and NAPA had agreed to extend the partnership through the 2026 season.  NAPA Auto Parts once again provided title sponsorship for the NAPA Spring Sizzler in April, the NAPA SK 5k in June, and the NAPA Fall Final in September.

The biggest off season news from Stafford Speedway was the fact that the track would no longer be NASCAR sanctioned and would operate as an independent track.  Several new races were brought to Stafford in 2021 with the Granite State ProStock Series making its debut as part of NAPA Opening Day the day before the NAPA Spring Sizzler and Stafford played host to Ray Evernham and Tony Stewart’s Superstar Racing Experience as the debut race of the series that was shown live on CBS.  Hometown driver Doug Coby won the 100-lap race outlasting names such as Stewart, Greg Biffle, Indy 500 winner Helio Castroneves, NASCAR Cup Series champions Bill Elliott and Bobby Labonte and more.

There were also several new bonuses available to Stafford teams.  Stafford partnered with FloRacing to livestream all weekly racing events in 2021 and FloRacing provided $40,000 in bonus money that was paid out to drivers from all 5 of Stafford’s weekly divisions throughout the season.  Stafford Speedway also instituted a track point fund of $33,000 that was paid out to the top-15 SK Modified® drivers and the top-10 drivers from the Late Model, SK Light, Limited Late Model, and Street Stock divisions.  The Dunleavy’s Gambler’s Challenge returned for 2021 with Michael Christopher, Jr. taking the SK Modified® bonus of $5,800 and Derek Debbis claiming the SK Light bonus of $3,750 during Dunleavy’s Modifiedz Night.  Quinn Christopher once again provided a bonus prize of a brand new Bell helmet for five lucky drivers from the Ted Christopher Drive for Safety Initiative.  The lucky 5 winners were Tyler Hines, John Blake, Paul French, Mike Hopkins, and Frank L’Etoile, Jr.  TickMike.com provided a purse of $20,000 for an SK Modified® All-Star Shoot Out as part of the SRX event on June 12 with Michael Christopher, Jr. taking home the lion’s share of $5,000 by winning stage 2 and the final stage of the All-Star Shoot Out.

Stafford Speedway once again hosted four Open Modified events during the 2021 season with all 4 races becoming part of the newly formed CBYD 811 Challenge.  Drivers who competed in the Open Modified events as well as the Tri-Track Modified Series events earned points towards the CBYD 811 Challenge with top-10 finishes and the driver with the most points at the end of the season would take home a $8,110 bonus.  That bonus was claimed by Chase Dowling, who won the Twisted Tea 80 in June and the Bud Light 80 in July.  The other two Open Modified winners were Michael Christopher, Jr. in the CBYD 81 in May and Ryan Preece in the Lincoln Tech 80 in August.