(Stafford Springs, CT)— Throughout the first seven Late Model races of the 2020 season at Stafford Speedway, the common theme has been parity.  Thus far Adam Gray is the only repeat feature winner of the season as the Late Model division has seen 6 different winners through the first 7 races.  The 2020 season kicked off with Wayne Coury, Jr. winning followed by Al Saunders and Ryan Fearn.  Gray then won back to back events on July 31 and August 8 before Paul Arute and then Darrell Keane found their way to NAPA Victory Lane. 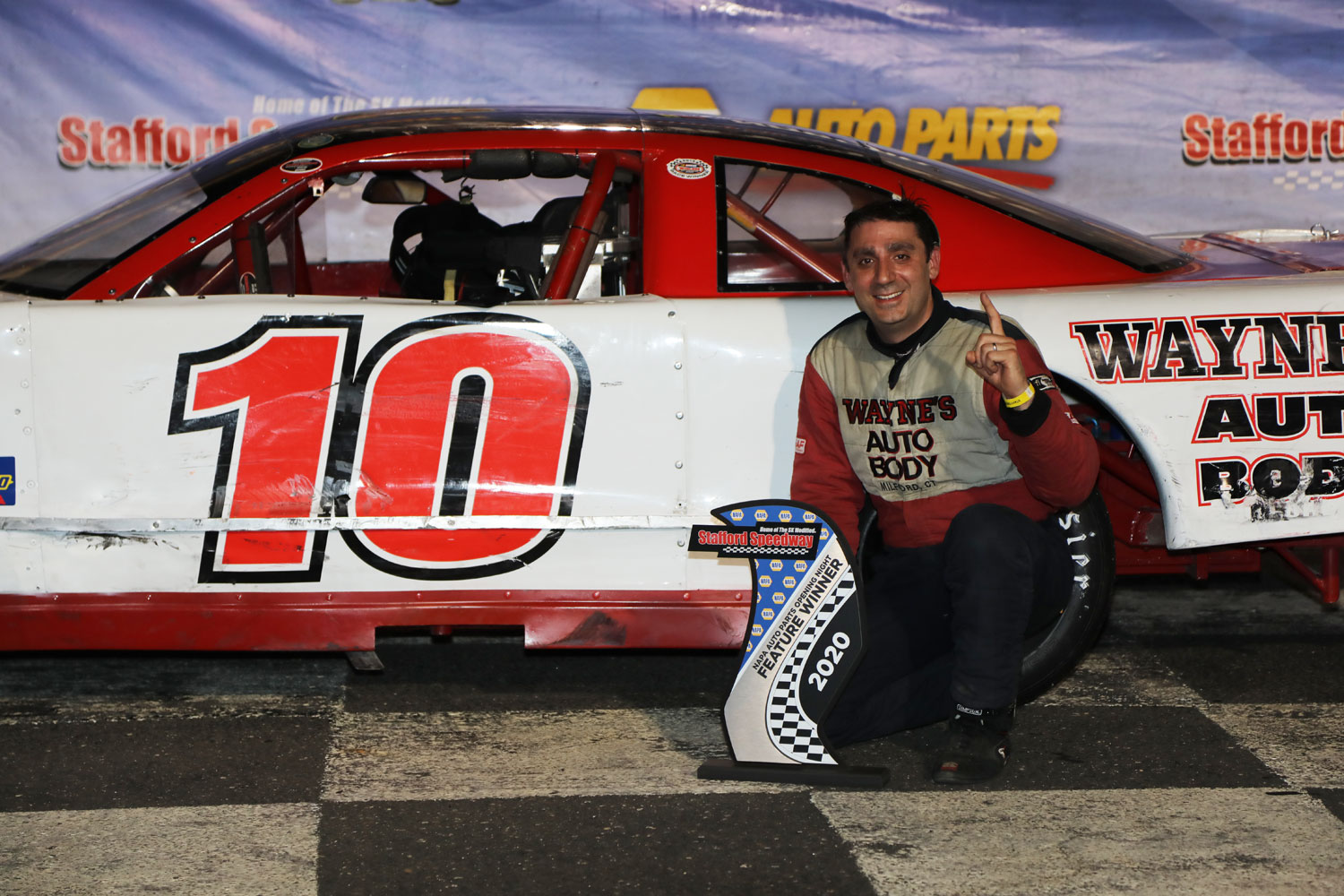 “I think it’s been a couple of reasons,” said NAPA Opening Night feature winner Wayne Coury, Jr.  “The tire that we’re running this year has evened out the competition and it’s been harder to adjust the cars to the new tire and it’s been hard to stay on top of.  Everyone that I’ve talked to has said that week to week they’ve had to make a lot of adjustments to their car in order to stay fast and our car is no different.  The car will be really good one week and for instance last week our car was junk.  Another reason is with the bigger car counts we’ve been having there’s so many good cars out there and it’s harder to get through traffic.”

“I think there’s three main reasons for the variety of Late Model winners that stick out to me: the field, the handicap, and the tires,” said Ryan Fearn.  “All three in play at the same time makes for a very deep rabbit hole to explore. To paint the picture however, let’s look at it this way. You’re a top car, you qualify in the heat, and you’re handicapped to start 15th. You have 14 drivers ahead of you with 14 different driving styles, 14 different spotters with their own styles, and you have to do your best to decipher the most likely series of events based on the whole feature line up. Even on the reverse side of things, having a nice handicap up front, you’re figuring out how much time before the fast guys get to your bumper.  After you do all of that pre-race, then you have to worry about tire management.  The bottom line is that these races are won with planning.  You take the lemons you’re given and see if you’re good enough to make lemonade with them. Every winner this year has had to make some pretty good lemonade.” 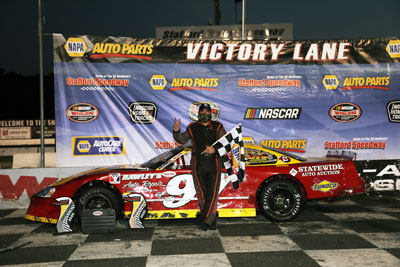 “If you look all throughout New England or even the entire country, any race track that you go to there’s usually one guy who stands out and is really fast every week, but with the Stafford Late Models, three-quarters of the field can win on any given night,” said Adam Gray, the only repeat Late Model winner to date.  “It’s very tough competition and there’s a lot of great cars and great drivers.  Fans don’t want to watch the same guy winning every week so I think that Stafford has done a great job with the Late Model rules and keeping things the way that they are.”

“I’d say the division is very competitive and you need to have a good starting position or a really good car in the feature in order to pass other cars,” said Paul Arute.  “If there’s 20 cars in the feature, I think there’s 15 that are always a factor to win.  This tire has put things back in the driver’s hands in how to make the car better.  In order to win a Late Model race at Stafford, you have to be perfect and it’s tough to be perfect every week.” 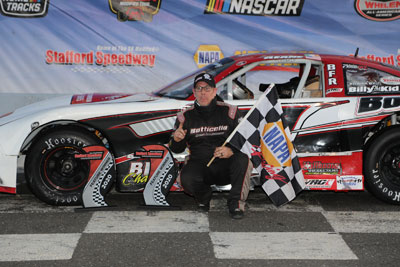 “I think the rules package that the Arute’s have put together has really evened the field out quite a bit,” said the most recent feature winner Darrell Keane.  “People have really been doing their homework and the guys who have been running up front have stuck with the division through the tough times and the benefits for those guys sticking with it are starting to show through.  The Saunders twins, Ryan Fearn, Michael Bennett, Tyler Leary, all those guys who have stuck with the division are reaping the benefits.  With Tom Fearn not having as much luck as he’s had in previous years everyone else has stepped their game up to match the level that Tom’s team has been at.”

With parity the main theme of the 2020 Late Model season, it’s anyone’s guess as to who will be the winner in the upcoming Late Model 50 on September 4th.  Ryan Fearn is the defending champion of the extra distance race while Arute won the race in 2018 and Adam Gray won a 60-lap Late Model feature back in 2013.  Michael Bennett, who is still in search of his first win of the 2020 season, is a former 2-time winner of the Late Model 50, taking the checkered flag in 2015 and 2017.  Another driver still in search of his first 2020 victory is Tom Fearn, who has won an astounding 40 Late Model races from 2016-2019.  Arute, Coury, Gray, and Keane are all looking forward to the extra distance race and they all like their chances of being among the contenders to win the race.

“I’m excited for the 50-lap race,” said Coury.  “We haven’t run an extra distance race in the last couple years but my car has always been pretty good on the longer runs so I’m hoping it will be a good long run car again.  The car always seems to come in during the middle of the race and with 30-lap races sometimes it’s a little too late when the car comes in.  It’s been nice to be a regular this season and not have to be out of the handicapping and I’m really looking forward to this race.” 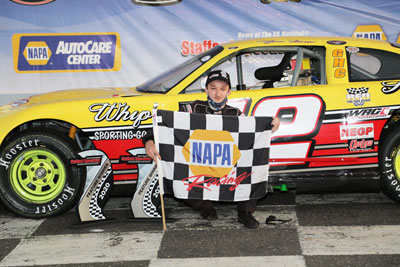 “As far as the big race goes, no idea what my chances are,” said Fearn.  “I’m thinking there’s a pretty low chance I’ll start third again, that’s for sure.  Last year’s 50 lapper wasn’t too easy, having to overcome about seven restarts, but being up front was a key to success in that race.  There’s definitely going to be some trouble if things get backed up mid pack. Hardly anyone is afraid to move guys for position. I guess I’ll have to consult my Magic 8 Ball until I see the feature line up.  Even then, there’s no guarantees.  I’ll have to make that lemonade.”

“I’m feeling pretty good about that race,” said Gray. “Our car has been really good and in years past I think that’s the only extra distance race that I’ve won.  Throughout this season our car kind of comes to life towards the end of the race so if we can get a few extra laps out of the car, I think we can be golden and have a good shot at winning that race.” 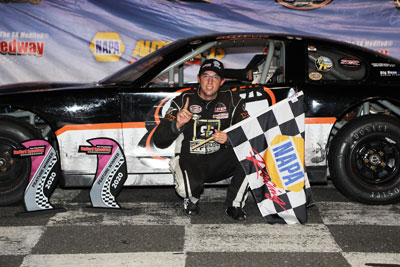 “I think this year’s 50 lapper is going to be different just because there’s more cars in the field,” said Arute.  “With more cars, there’s going to be cautions and opportunities for drivers to pit and make adjustments if their car isn’t perfect.  There won’t be anyone toying around out there, it’s going to be 50-laps of going flat out.  You have to have some luck on your side with missing wrecks and not getting caught on the outside and things like that.  If you can be in the top-5 with 10 laps to go, I think you’ll have a shot at winning.  You have to have everything come together for you and I think we can be a contender.”

“To prepare for that race, we’ll do a little extra work in the shop, things that normally we wouldn’t do with the car,” said Keane.  “With how hot the weather has been we’ll have to make sure that we eat good during the week and make sure we hydrate before the race.  There’s probably 7 or 8 cars that can win and I remember last year patience wasn’t a virtue for a bunch of us in the 50 lapper.  Everyone this year has been really good about keeping their heads and showing one another respect on the track so I think fans are going to see 30 calm laps and then 20 laps of flat out hard racing at the end.”

Arute, Coury, Fearn, Keane, and Saunders will all attempt to join Gray as repeat Late Model winners this Friday night, August 28.  Tickets for this Friday night’s Stafford Weekly Racing program are on sale now through the Stafford Speedway website with adult general admission priced at $20.00, $5.00 for kids ages 6-14, kids 5 and under are admitted free of charge when accompanied by an adult, and paddock passes are priced at $40.00.

Tickets for next Friday night’s Late Model 50 program will go on sale through the Stafford Speedway website starting at 8am on Saturday, August 29 with adult general admission priced at $23.00, $5.00 for kids ages 6-14, kids 5 and under are admitted free of charge when accompanied by an adult, and paddock passes are priced at $45.00.  There will be a live stream of the Late Model 50 program available on www.staffordspeedway.tv.