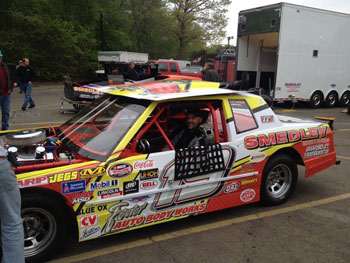 (Stafford Springs, CT)—Adrien Paradis, III has joined the 2019 Street Stock rookie class at Stafford Speedway. Paradis comes to Stafford from Waterford Speedbowl, where he worked as a crew member on the Doug DiPisa owned #13 SK Modified® and ran his own #19 car in the Limited Sportsman division for the past three seasons. Paradis is looking forward to the challenge of racing at a new track and he is eager to get his season underway behind the wheel of his #19 Newcomb Spring Chevrolet.

“I’m really excited about coming to race at Stafford this season,” said Paradis. “I figured the time was right for me to try racing at Stafford. Last year, I couldn’t wait for the season to be over and now I can’t wait to get started.”

The 2019 season will mark the first time Paradis will take to the Connecticut half-mile facility. Paradis comes from a background working on modifieds and has been busy during the winter converting his Limited Sportsman car to conform to the Street Stock rules. 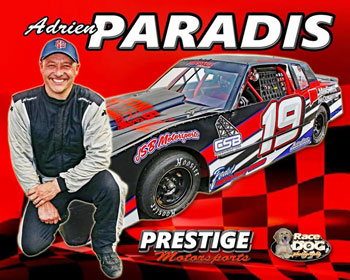 “I got started in racing at Plainville Stadium where my father was a car owner and my uncle drove,” said Paradis. “In 2014 I hooked up with Doug DiPisa and Ted Christopher at Waterford to help them out with the #13 car and Doug was building a sportsman car for a friend of his. Doug’s friend ended up buying a house so he sold the car to me and I’ve been racing for the past three seasons. We bought a crate motor and we changed the transmission and the rear end in the car but other than that, the car will be the same.”

Paradis worked with longtime Stafford crew chief Joe Brockett as his crew chief at Waterford. With Brockett unsure if he was going to return to the Waterford pit area in 2019, Paradis had extra motivation to bring his operation to Stafford this season and lean on Brockett’s Stafford expertise to help overcome his lack of Stafford knowledge.

“Joe Brockett is my chassis guy and has a lot of setup knowledge at the half-mile so that was another big decision for me to move to Stafford,” said Paradis. “Joe’s been doing this for a long time and with me having been racing for only three years, I’m still learning things about the chassis and the car setup. He’s a great guy to have on my side as I try to learn the fast way around Stafford.” 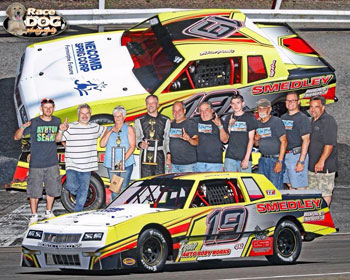 In his three seasons at Waterford, Paradis drove to 2 wins and he finished fourth in the Limited Sportsman points standings in each of the last two years. Paradis narrowly missed out winning Rookie of the Year back in 2016 at Waterford and he would like to take that award home with him at the conclusion of 2019.

“I’d really like to win Rookie of the Year,” said Paradis. “I missed winning that at Waterford by one position back in 2016. I would have won it but the last race that season the shifter broke and my car was stuck in first gear. If I could finish in the top-10 in points during my first season, I’d be happy with that. Obviously I want to do a lot better than that but I’ve never turned any laps before at Stafford so everything is going to be new to me. The first few races I’m sure are going to be all about learning the track but we’re going to try to win races. If we can’t win, a podium finish would be great for our rookie season. It looks like the Street Stocks have a pretty good car count going from what I’ve seen on the Stafford website so I’m looking forward to some stiff competition out on the track.”

The first several practice sessions of the new year will be of utmost importance to Paradis to find the quick way around the Stafford half-mile.

“Getting behind the right person and learning about the groove will be huge for me,” said Paradis. “Every track is different so it’ll be important to see who is fast the first weekend or two and for me to get behind them and learn all the ins and outs of getting around Stafford.”

The 2019 Street Stock season will kick off at the 48th Annual NAPA Spring Sizzler® on April 26-28. Tickets for the “Greatest Race in the History of Spring” are on sale now by calling the Speedway Box Office 860-684-2783 or online at www.staffordspeedway.com.