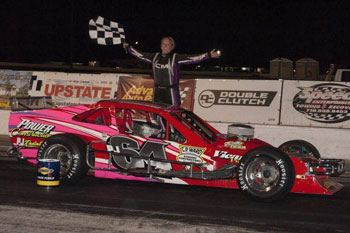 (Stafford Springs, CT)—In the world of motorsports, there have been plenty of family combinations between brother or father-son duos, but when the NASCAR Whelen Modified Tour comes to Stafford Speedway this Friday, Aug. 2 for the Stafford 150, history will be made. For the first time ever on the Tour, there will be a mother-son combination as Amy Catalano will join her sons Tommy and Timmy. The trio has raced together before on the R.O.C. Tour as well as weekly racing at Holland and Spencer Speedways in New York with both Amy and Tommy winning track championships, so the Stafford 150 will be nothing new for the Catalano’s.

“I’m excited to make my first Tour start at Stafford,” said Amy Catalano, who will be behind the wheel of the #84 CP Ward Chevrolet. “It could go both ways and either be good or bad but I’m hoping that we can all 3 finish the race and all do well. I’m a little apprehensive because I don’t want to take anything away from the kids but they convinced me that Stafford would be the place that we could do it and get through the race. I’d like to thank our crew, we have 3 people who come with us to all the races, and I also have to thank CP Ward and TJ Radiator for their support.” 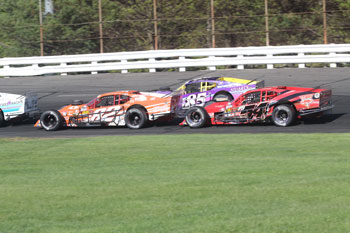 “We’ve raced together on the ROC Tour and on a weekly basis but this will be our first tour race together,” said Tommy Catalano, driver of the #54 CP Ward Chevrolet. “It’s definitely pretty cool. Everyone always says that it happens every week but it’s a whole different stage going to the Tour. She’s always said she wanted to make a Tour start before she retires from driving and I have four younger brothers and 3 of us are racing modifieds so it’s getting close to time to pass her car on. It’s pretty cool that she’s able to do this and hopefully we can have her make a couple more starts before this season ends.” 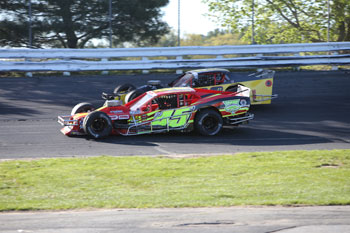 Amy Catalano began her racing career by racing against her husband David and once her kids started racing, David stepped away from the driver’s seat to focus on working on the cars. The idea of Catalano joining her kids on the Whelen Modified Tour grid for a race is an idea that has been talked about for a while between the family members and Amy finally making her Tour debut came down to a promise that she made to her son Tommy last year at Thompson Speedway.

“My husband and I started racing against each other and that’s actually how we started racing before we had kids so we’re used to racing against family,” said Amy Catalano. “I ran the MRS race last year at Thompson and I told Tommy, who was spotting for me, that if I got a top-10 finish then I would run a Tour race and he has not let me live that down yet. You’ve always got to be careful with what you say because one day you could eat those words. We do have a lot of fun together and any time I tell my kids I’m going to stop racing, they all get upset and they tell me to keep on going. My 2 youngest sons tell me I can’t stop until they start racing because everyone wants the chance to be better than Mom!” 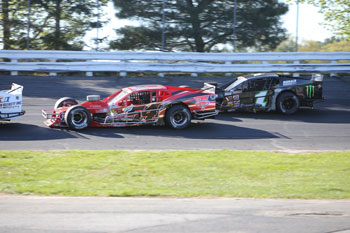 With 34 cars on the entry list for 31 starting spots, Catalano’s first goal will be to qualify for the race. Catalano will have to turn a fast enough lap to be one of the fastest 25 cars in time trials as she will have no points to fall back on to get a provisional starting position.

“My first goal is to qualify for the race since I don’t have any points to help me get in the race,” said Amy Catalano. “Then I’d like to complete all the laps and get a top-15 finish. That might not sound very good, but the Tour is very, very competitive and if I could come out with something in the top-15, that would be a great finish for my first Tour start.”

In four career Stafford starts, Tommy Catalano has a best finish of 15th while Timmy Catalano made his first Stafford start in the NAPA Spring Sizzler® a memorable one as he ran in the top-10 for most of the race before settling for a 13th place finish. Both drivers are looking forward to returning to Stafford. 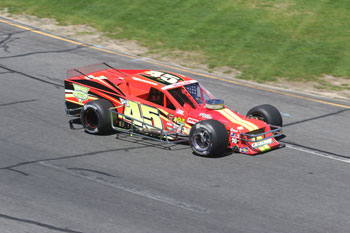 “I’m feeling pretty confident coming to Stafford,” said Tommy Catalano. “Stafford is a track that I’ve kind of struggled at, but after our run at New Hampshire, I think we have our new car dialed in and I’m looking forward to the race. Hopefully we’ve found that little extra bit that we seem to have been missing. We had some mechanical trouble during the Sizzler and we lost a couple laps getting the car fixed but my brother ran in the top-10 for most of the race so that was definitely big for us.”

“Stafford is probably one of my favorite tracks that we go to,” said Timmy Catalano. “It kind of reminds me of a couple tracks that we race up here in New York and it’s a really cool place to go racing. It’s a very racy track and with the respect of the other drivers out there you can get a lot of good battles going. I’m excited to go back to Stafford, I’ve actually had this race circled on my calendar for a while now and I’m excited to see what we can do this time around. If we can qualify in the top-20 or top-15 that would be good and obviously we’d like to get a top-10 finish. To run in the top-15 on the Tour is a great accomplishment for us with the caliber of cars and drivers that are on the Tour and we wouldn’t hang our heads if that’s where we ended up.”

The 29th Annual Stafford 150 takes the green flag on Friday, August 2nd. Tickets for the Stafford 150 are available and on sale now at the Stafford Speedway Box Office. Tickets are priced at $35.00 for adult general admission tickets, $5.00 for children ages 6-14, and children ages 5 and under are admitted free of charge when accompanied by an adult. Reserved seat tickets are $38.00 for all ages. All ticket prices include 10% CT Admission Tax. Stafford Motor Speedway offers plenty of free parking along with overnight parking available for self contained Recreational Vehicles. Stafford’s five NASCAR Whelen All-American Series divisions will join the NASCAR Whelen Modified Tour cars in feature action.