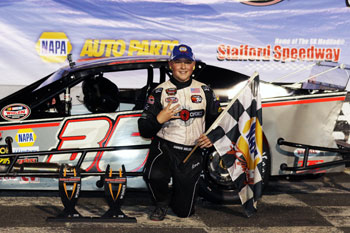 (Stafford Springs, CT)—For Shelton native Andrew Molleur, the 2018 season at Stafford Speedway has been all about making dreams come true. The 15-year old driver has scored 4 wins this season in his first full season of SK Light competition and as he looks to close out the year with another victory, he will realize another dream by making his first ever NASCAR Whelen Modified Tour start this weekend, September 29-30 in the NAPA Fall Final 150 behind the wheel of the #35 RaceChoice.com / Bud’s Diesel Chevrolet.

“I’m very excited to make my Whelen Modified Tour debut at Stafford, I can’t wait,” said Molleur. “I’ve been watching the guys who race on the Tour for years and I grew up racing with Matt Swanson, so it’s going to be pretty cool to race with him again. Stafford is one of my hometracks and there is nowhere else I’d rather make my Whelen Modified Tour debut than at Stafford. Bud’s Diesel and RaceChoice.com have been sponsors of ours for a while and they were happy to come on board with support to make this possible. It’s the big stage and this is the biggest series in New England, I am a little nervous. I’ve been watching the Whelen Modified Tour for so long now, it’s awesome that I’m actually going to be a part of it at the NAPA Fall Final.” 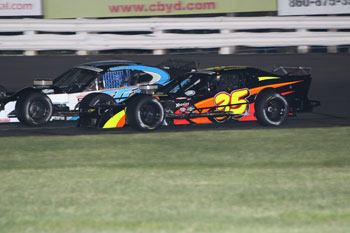 For his debut effort on the Tour, Molleur has teamed with Rob Fuller and LFR Chassis for not only a car, but a chassis setup as well. With Chase Dowling having already won pole positions in the first two NWMT races held at Stafford this season to go along with a second place finish in the NAPA Spring Sizzler back in April, Molleur knows he will have a stout piece of equipment to work with.

“The car is an LFR car that Austin Pickens has driven and we made a deal with Rob Fuller to drive the car this weekend,” said Molleur. “We just got the car in the shop the other day and we’re going to letter it up and go racing. We’ve been to the LFR shop a bunch of times and Rob is putting a setup in the car for us. With how well Chase Dowling has run at Stafford this season, I definitely know the car will be really good.”

While Molleur is ecstatic to be making his first career NASCAR Whelen Modified Tour start, he has a realistic goal in mind of finishing all 150 laps and learning as much as he can from the 2-day event. 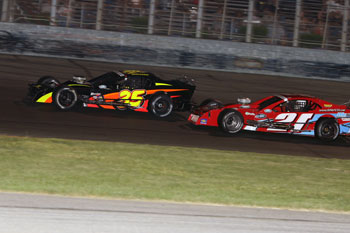 “The goal is to learn a lot and keep all 4 wheels on the car,” said Molleur. “I’d say a top-15 finish would be a reasonable goal for us. I’d like to learn from some of the guys who have been racing on the Tour for a long time and hopefully we can avoid wrecks and come out with a solid finish.”

“I think it’ll give us a little bit of an advantage having a feel for the racetrack,” said Molleur. “Last year I wasn’t as comfortable at Stafford as I am this season. I feel comfortable knowing the line and where I need to lift and get back on the gas. The practice sessions are going to be very important for us. We’ve run a Tour type car at Stafford before, but it’s my first Whelen Modified Tour race so I’m feeling a little pressure. We’ll need to have a good couple of practice sessions and make sure that we can qualify in a good spot. I’m preparing for this race just like any other race, getting my head in the right place and be focused for the race.”

With Whelen Modified Tour races counting caution laps while the other modified touring series that Molleur has participated in do not, Molleur and his pit crew will be in store for a totally different atmosphere making live pit stops.

“The one tire per stop rule is going to be different for me and my crew,” said Molleur. “When we’ve run the MRS, you don’t have to worry about going laps down on pit road so I’ll have to make sure I get in and out of the pit box right and I don’t speed on pit road. There’s a lot more strategy when coming to pit road so there will be a little extra pressure on me and the crew guys.”

As well as making his NASCAR Whelen Modified Tour debut, Molleur will be looking to close out his 2018 season on a high note in the SK Light division by shooting for what would be his fifth victory of the year. Molleur enters the NAPA Fall Final feature event in 5th place in the SK Light standings and he could potentially finish as high as third in the standings with another victory. 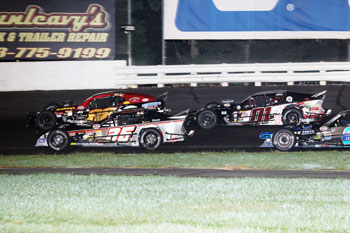 “Coming into the year our goal was to get one win and to have four wins is almost overwhelming,” said Molleur. “It’s pretty cool to have a fast racecar and be able to run up front with guys like Marcello Rufrano, Bryan Narducci, Teddy Hodgdon, and Mark Bakaj. Sadly we had a couple of DNF’s in the middle of the season but we’ve come back stronger and hopefully we can end the season on a high note. To get another win at Stafford would give us some bragging rights for the off season and it would put a nice cap on the season.”

Tickets for the 46th Annual NAPA Auto Parts Fall Final Weekend are priced at $40.00 for adult general admission, $5.00 for children ages 6-14, and children 5 and under are admitted free of charge when accompanied by an adult. Reserved seating is priced at $42.00 for all ages. All NAPA Fall Final tickets are good for admission on both Saturday and Sunday and ticket prices include 10% CT Admission Tax. Discount tickets are available at your local participating NAPA Auto Parts Store. The NAPA tickets include general admission for both days along with a luncheon buffet on Sunday, all for only $38 per person. For a list of participating NAPA Stores, please click the PARTICIPATING NAPA STORES link found at the top of the www.staffordspeedway.com homepage.