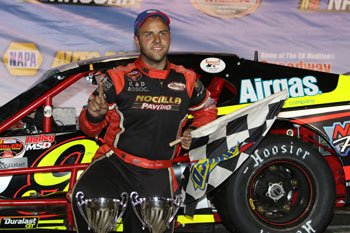 Dave Etheridge took the early lead at the drop of the green flag with Rowan Pennink, Keith Rocco, Woody Pitkat, and Donnie Lashua lined up behind him. Rocco took to the outside groove on lap-6 and he took second from Pennink and slotted himself in second right behind Etheridge.

Rocco made a move around Etheridge on lap-12 to move to the lead with Pennink and Pitkat lined up right behind them in a 4-car train that was starting to pull away from the rest of the field. Lashua was fifth with Dylan Kopec in sixth, Anthony Nocella in seventh, Richard Savary eighth, Mike Willis ninth, and Les Hinckley tenth.

The action was slowed with 22 laps complete as Geoff Gernhard spun coming out of turn 2. Rocco was the leader for the restart with Etheridge, Pennink, Pitkat, Lashua, and Nocella lined up behind him.

Rocco took the lead back under green with Pennink right on his back bumper. Etheridge was third in line with Pitkat fourth and Nocella in fifth as Lashua fell back a spot to sixth. This was the order when the caution came out with 30 laps complete for a spin in the middle of turns 3+4 by Colby Fournier.

Rocco took the lead back under green with Pennink in second. Pitkat moved up a spot to third with Etheridge back to fourth and Nocella was fifth. Jeff Rocco nearly spun in the middle of turns 3+4 to bring the caution out with 34 laps complete. Under the caution period, Etheridge brought his car to pit road from fourth place and he rejoined at the rear of the field for the restart.

Rocco took the lead on the restart and he held it until lap-41 when Pennink moved to the lead. Pitkat was third with Savary in fourth and Nocella was in fifth. Carl Medieros, Jr. spun coming out of turn 2 to bring the caution out with 47 laps complete.

Pennink was the leader back under green with Rocco holding on to second. Savary ws third with Pitkat fourth and Nocella in fifth. Etheridge and Dylan Kopec spun on the frontstretch along with Roy Seidell to bring the caution out with 50-laps complete.

Rocco went around Pennink on the restart to move back to the lead. One lap later, Pennink came back strong to the inside of Rocco to take over the lead. Pitkat was third with Nocella in fourth and Hinckley was up to fifth. Medieros and Seidell spun in turn 4 to bring the caution out with 52 laps complete. 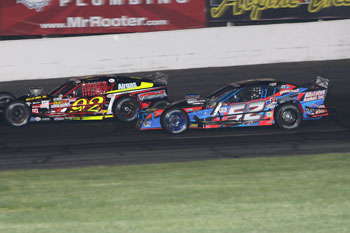 Pennink resumed the lead on the restart with Rocco in hot pursuit from second. Nocella was now up to third with Pitkat in fourth and Anthony Flannery was up to fifth. Nocella was able to take second from Rocco with a power move coming out of turn 4 on lap-56 as Pennink continued to lead.

With 20 laps to go, Pennink was starting to stretch out his lead over Nocella, Rocco, Pitkat, and Savary. Jonny Kay spun with 63 laps complete to bring the caution out and bring the field back to Pennink.

Pennink took the lead back under green with Nocella right behind him in second. Pitkat was third with Rocco in fourth and Savary in fifth. Pennink was starting to stretch out his lead once again but the caution erased his lead with 71 laps complete as Fournier spun in turn 4.

On the restart Gernhard and Jeff Gallup both spun in turn 2 to bring the caution right back out. Under the caution, Rocco’s car dropped off the pace and slowed to a crawl at the entrance of pit road. Pennink took the lead with Nocella, Savary, Pitkat, and Hinckley lined up behind him. Matt Mead brought the yellow out with 74 laps complete with a trip through the frontstretch grass.

The restart saw Gerhard get into the turn 2 wall while Lashua and Flannery spin at the end of the backstretch to bring the caution back out. The race was red flagged and when the race retuned to caution, Pennink’s car wouldn’t start back up and Savary came to pit road out of gas, handing the race lead over to Nocella with Pitkat, Willis, Hinckley, Ronnie Williams, and Charlie Pasteryak making up the restart order.

Nocella powered into the lead with Pitkat in second on the restart. Willis was third with Pasteryak fourth and Hinckley in fifth. Nocella led Pitkat to the checkered flag to pick up his first win at Stafford. Willis finished third with Pasteryak and Williams rounding out the top-5.