(Stafford Springs, CT)—Stafford Speedway hosted Weekly Racing action on Friday, August 28 with all 5 of its divisions in feature action.  It was a night of threes as Keith Rocco held off a hard charging Chase Dowling to pick up his third SK Modified® win of the 2020 season, Adam Gray scored his third Late Model feature win of 2020, and rookie Derek Debbis scored his third SK Light feature win of the 2020 season.  Andrew Durand took down his fourth Limited Late Model win of 2020 while Chris Meyer was a first time Stafford winner in the Street Stock feature. 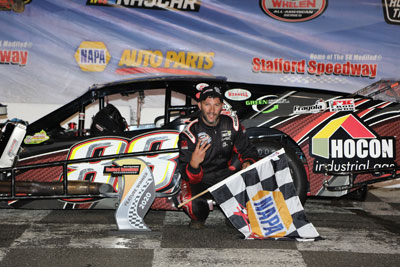 In the 40-lap SK Modified® feature, Matt Vassar took the early lead with Brian Narducci behind him in second.  Tony Membrino, Jr. and Marcello Rufrano were side by side for third and Keith Rocco and Ronnie Williams were side by side for fifth.  Rocco went by Rufrano for fourth on lap-6 and Williams followed him by as Rufrano dropped back to sixth.  The positions continued to shuffle as Rocco took third on lap-8 and Chase Dowling was up to fourth behind him and Narducci was fifth as Vassar and Membrino were setting the pace out front.

Membrino made a move to the inside of Vassar to take the lead on lap-11 and Rocco followed him by Vassar to move into second.  Dowling was now side by side with Vassar for third with Narducci in fifth and Williams in sixth.  Rocco took the lead from Membrino on lap-13 and the caution came out with 13 laps complete as Todd Owen got out of shape and got into the turn 3 wall.

Rocco took the lead on the restart while Dowling shot to the inside of Membrino to take second.  Vassar held off a challenge from Narducci to keep third with Membrino in fourth and Narducci back to fifth.  At the completion on lap-16, Dowling was glued to Rocco’s back bumper and he made the move to take the lead from Rocco one lap later.  A multi-car incident in turn 1 involving Narducci, Leary, Andrew Molleur, Cory DiMatteo, Tom Bolles, Jonathan Smith, David Arute, Michael Christopher, Jr.,  and John Catania brought the caution out with 17 laps complete.

Rocco took the lead on the restart with Dowling and Rufrano side by side for second.  Membrino and Stephen Kopcik were side by side for fourth behind them and with 21 laps complete the order shuffled back to single file with Rocco leading Dowling, Rufrano, Kopcik, Membrino, Michael Gervais, Jr., and Williams.  Rufrano’s car got out of shape coming out of turn 4 on lap-23 but he perfectly drifted his car through the corner and rejoined the field in 17th place.

With 10 laps to go, Dowling was hounding Rocco for the lead with Kopcik, Gervais, and Williams making up the top-5.  Dowling made a run to the inside of Rocco on lap-31 and the two cars touched and got sideways coming out of turn 4 on lap-32 but they stayed straight and continued fighting for the lead.  Dowling stayed glued to Rocco’s back bumper over the final 5 laps but he couldn’t get close enough to make a move as Rocco scored his third win of the 2020 season.  Kopcik finished third with Williams and Gervais rounding out the top-5. 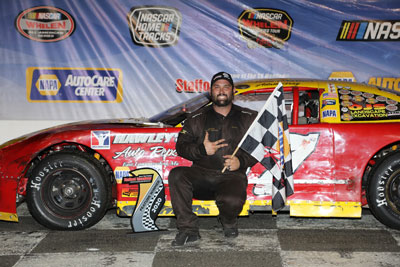 In the 30-lap Late Model feature, John Blake took the lead at the green with Michael Wray on his outside and Marc Curtis and Tyler Leary side by side behind them.  Several cars came together as the field completed the first lap with Al Saunders got sideways and near spun through the frontstretch infield but he was able to keep his car straight while Paul Arute came to a stop in turn 1 with a flat right front tire.  Ryan Fearn was sent to the rear of the field for overaggressive driving by NASCAR officials.

Blake and Wray resumed their side by side duel for the lead on the restart with Leary taking third.  Michael Bennett came up to fourth and Curtis was on his outside in fifth place.  Leary got around Wray to take second on lap-4 while Bennett and Curtis were still side by side for fourth with Blake in the lead.

Tom Fearn made a move to the inside of Bennett on lap-6 to take over fourth and his move allowed Adam Gray to follow him through traffic to take fifth.  Wayne Coury, Jr. and Al Saunders were side by side for sixth as Bennett slid back to eighth.  Curtis spun coming out of turn 4 and collected the car of Arute to bring the caution out with 8 laps complete.  Jim Mavlouganes was sent to the rear of the field for overaggressive driving.

A multicar melee erupted in turn 2 on the restart involving Darrell Keane, Leary, Wayne Coury, Jr., Blake, and several others that brought the caution right back out.

Wray and Gray led the field back to the green flag and Gray took the lead on the outside of Wray with Tom Fearn slotting into third.  Ryan Fearn was back up to fourth after his early race penalty and Bennett was fifth in line.  Fearn made a move to the inside of Wray to take over second on lap-12 with Ryan Fearn following him through to drop Wray back to fourth, just in front of Bennett as Gray continued to lead.

Paul Varricchio, Jr. made a move around Wray to take over fifth on lap-15 and Al Saunders, who came into the race second in the Late Model points standings, dropped off the pace and limped to pit road with a flat right front tire.  With 10 laps to go, Gray was still out front with Tom and Ryan Fearn Bennett, and Varricchio making up the top-5.

Ryan Fearn took a look to the inside of Tom Fearn for second on lap-23 but Tom shut the door and maintained second place.  The Fears couldn’t get close enough to Gray to make a bid for the lead as Gray nailed down his third win of the 2020 season.  Following post race inspection, the cars of Tom Fearn and Ryan Fearn were found to have illegal brake components and they were disqualified from the feature finish.  The disqualifications promoted Bennett to second with Wray, Varricchio, and Duane Provost rounding out the top-5. 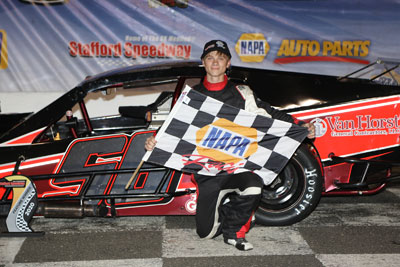 In the 20-lap SK Light feature, Amanda West took the lead at the green with Andrew Les and Bob Charland going side by side for second.  Just behind Les and Charland was the side by side duo of Jonathan Puleo and Derek Debbis.  The caution came out with 2 laps complete as Alexander Pearl, Steven Chapman, and Todd Douillard came together with Chapman and Douillard coming to a stop against the turn 3 wall while Pearl was able to continue.

Les charged into the lead on the restart on the outside of West but the caution came out one lap after the restart as Wesley Prucker came to a stop coming out of turn 4 with heavy right front damage to his car.

Norm Sears went around Bennett to move into fifth on lap-11 while Puleo was applying heavy pressure to Les for second place.  Puleo made a move to the inside of Les on lap-12 and they began to duel side by side while behind them, Sears took fourth from West and Brian Sullivan followed him by to take fifth and drop West back to sixth in line.  Puleo got by Les to take second and Sears was now side by side with Les for third with 5 laps to go.  George Bessette, Jr. spun at the exit of turn 4 to bring the caution out with 16 laps complete and set up a 4-lap dash to the finish.

Debbis took the lead back under green but Puleo made a strong move to his inside and they were side by side at the line with 3 laps to go.  Puleo spun in turn 2 to bring the caution back out with 17 laps complete.

Debbis took the lead on the restart with Sears second, Sullivan third, Les fourth, and West fifth.  Sears got to Debbis’ bumper but he couldn’t make a pass as Debbis took down his third win of the 2020 season.  Sullivan finished third with Les and West rounding out the top-5. 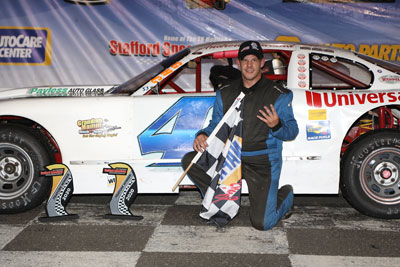 In the 20-lap Limited Late Model feature, Lucas Leone took the early lead at the green flag with Gary Patnode coming up to second.  Andrew Durand took second from Patnode on lap-3with Alexandra Fearn also getting by Patnode to move into third and drop Patnode back to fourth in line.  Patnode continued to slide backwards as Jeremy Lavoie took fourth and Matt Clement took fifth on lap-4 to drop Patnode back to sixth.  Durand took the lead from Leone on lap-4 and Fearn took second to drop Leone back to third in line.  Clement got around Lavoie to take fourth and with 8 laps complete the order was Durand, Fearn, Leone, Clement, and Lavoie.

Clement made a move around Leone to take over third on lap-9 while Patnode’s night came to a premature end as he brought his car to pit road and parked for the remainder of the race.  With 5 laps to go, Durand was still in command out front with Fearn giving chase from second place.  Clement was third followed by Lavoie and Leone.

With 2 laps to go Fearn was right on Durand’s back bumper looking for a way to make the pass and take the lead and the win.  Fearn couldn’t find a way around Durand as he took down his fourth win of the 2020 season.  Clement finished third with Lavoie and Leone rounding out the top-5. 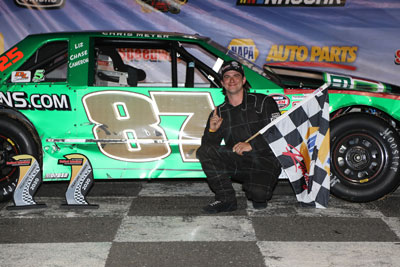 In the 20-lap Street Stock feature, George Yuska took the early race lead with Chris Meyer right on his bumper in second.  Larry Barnett was third followed by Frank L’Etoile, Jr. and Meghan Fuller.  Meyer went to the lead on lap-3 and he brought Barnett, L’Etoile, and Fuller with him as Yuska fell back to fifth.  The caution came out with 5 laps complete as Nickolas Hovey spun in turn 4.  Zack Robinson was sent to the rear of the field for overaggressive driving by NASCAR officials.

L’Etoile nearly went 3-wide for the lead on the restart but he settled back into line behind Meyer and Barnett.  The field completed one lap before the caution came back out for a spin in turn 3 by Jason Finkbein.

Meyer took the lead on the restart with L’Etoile taking second.  Fuller was up to third with Barnett in fourth and Yuska fifth.  The caution came back out with 9 laps complete for Brandon Michael, who spun and backed his car into the turn 1 wall.  Yuska was sent to the rear of the field for over aggressive driving by NASCAR officials.

Meyer took the lead back under green with L’Etoile, Fuller, Corey Fanning, Barnett, Jason Lafayette, Barnett, Robinson, and Hovey lined up behind him.  L’Etoile was applying heavy pressure to Meyer for the lead but Meyer was able to hold him off and maintain second.  The caution came back out with 14 laps complete as there was debris on the track in turn 1.

Fuller stayed glued to Meyer over the final laps but couldn’t make a bid for the lead as Meyer scored his first career win at Stafford.  L’Etoile, Fanning, and Robinson rounded out the top-5.