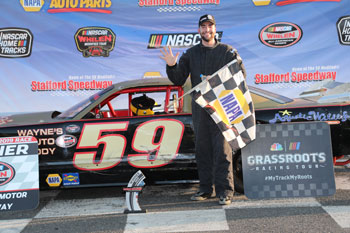 (Stafford Springs, CT)—Stafford’s Limited Late Model division has seen a see-saw battle between defending track champion Jeremy Lavoie and the #6 L & S Equipment team and Matt Clement and the #59 Aquatic Wildlife team in the race for the 2019 track title.

Lavoie began his title defense in the best possible fashion by winning the season opening race on May 4th. Clement, who entered the 2019 season with 0 wins to his name in 4 seasons of Limited Late Model competition scored his first career win on May 11 and he has followed that up with 4 more wins this season to lead all Limited Late Model drivers with 5 wins. Clement and Lavoie are the only drivers with multiple feature wins this season with Lavoie having notched 3 wins. Drivers with one win each this season include Alexandra Fearn and the #12 SAFCO Foam team, Gary Patnode and the #22 GP Fence team, and Duane Provost and the #88 Facchini Law Firm team. 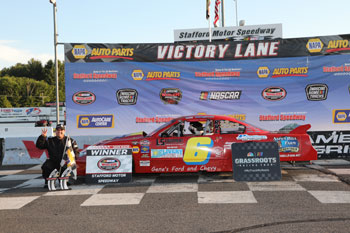 Leading the way in the race for the R.A.D. Auto Machine Limited Late Model Rookie of the Year award is Kevin Crosby and the #33 Crosby Motorsports team. Crosby holds a comfortable lead over Devon Jencik and the #23 Jencik Motorsports team although Jencik only began racing on June 28 and he has 3 starts thus far in 2019.