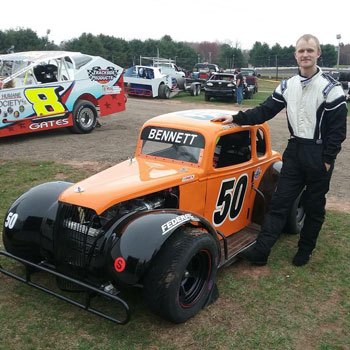 (Stafford Springs, CT)—With four Legend Cars championships to his name from 2017-2019, Cromwell, CT native Peter Bennett will step into SK Light competition at Stafford Speedway to challenge for Rookie of the Year honors in 2020.  Bennett raced with the Nutmeg Kart Club from 2010-2016 before moving into Legend Cars where he won the championship at Bethel Speedway in 2017, scored a double at Waterford in 2018 winning the Wednesday and Saturday championships, and won the Seekonk Speedway championship this past season.  With four championships over the past three years, Bennett was ready for a new racing challenge.

“SK Lights weren’t really in my plans until I wrapped up the 2019 season,” said Bennett.  “I had 3 consecutive Legend Cars championship seasons so the time was right to move up and find a new challenge.  I know Stafford is one of the most competitive tracks in the Northeast so I definitely have my work cut out for me.  Every time you’re a rookie the most obvious goal is to win Rookie of the Year and that’s probably going to be our primary goal this season.  I know there’s a few pretty good drivers moving up from Street Stocks so I’m sure it’s going to be a great race for Rookie of the Year and I’m excited to be part of that.  I had a lot of success winning championships in the Legend Cars and I’d love to say I’m going to run for the championship in the SK Lights, but I’ve never driven a modified before so this is going to be a huge learning curve for me and I’m planning on taking things one race at a time.”

Bennett purchased the Paul French owned #76 SK Light modified that Mark Bakaj drove to three wins over the course of the 2018 & 2019 seasons. 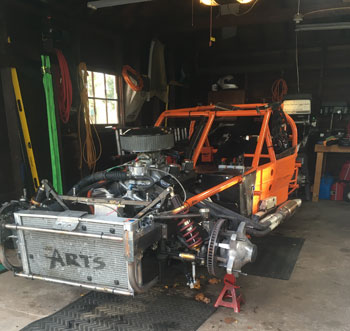 “It’s never easy buying a racecar, it’s a lot more complex than buying a street car,” said Bennett.  “Reputation and performance is important and Mark (Bakaj) won a race last season and 2 races the year before and it ran pretty competitively whenever he drove it, so that was a big factor in choosing that car to buy.  I’ve been busy taking the car apart and going through it to learn as much as I can about the chassis and Paul (French) has been helping me out with that.  I’m super excited to get on track at Stafford and see what it’s all about and how the car feels.  I have a lot of work left to do and I’m counting down the days to the open practices and the Sizzler.”

Bennett has just announced that Shoreline Coatings of North Branford, CT has signed on to be the primary sponsor of his #50 machine for the 2020 season.

“Shoreline Coatings is going to powder coat the car for me in the next couple of weeks,” said Bennett.  “It’s actually great for me because now I have time to strip the entire car down and learn it inside and out.  I’ll be pushing for more sponsors as we get closer to the Sizzler but Shoreline Coatings was the first to step up for me and I’m excited to have them on board with us.” 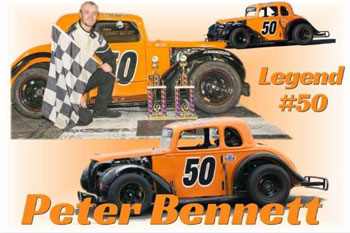 In addition to French, Bennett can also look to longtime friend and Stafford regular Chris Bagnall for advice.  Bagnall just completed his rookie season in the SK Light division after racing in the Street Stock division at Stafford from 2014-2018.

“I’ve known Chris Bagnall for a while and he was probably the main guy who convinced me to move into SK Lights this year,” said Bennett.  “He’s been showing me what I need to do and answer any questions I might have.  To be honest, I’m not much of a mechanic so there’s going to be a lot of learning about setting the car up and learning all the ins and the outs of a full size car rather than working on a smaller Legend Car.”

Bennett comes into the 2020 season with no driving experience behind the wheel of a modified but has seen the success that other Legend Cars competitors have had racing both SK Modifieds® and SK Lights at Stafford.  Bennett will also be looking to get as much seat time as possible before the season gets underway the weekend of April 24-26 for the 49th Annual NAPA Spring Sizzler®. 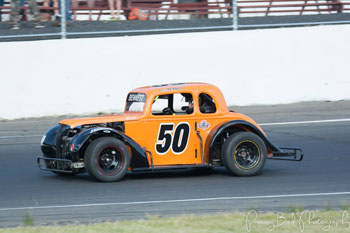 “The first couple open practice sessions before the season starts are going to be huge for me to get as much seat time as possible,” said Bennett.  “Hopefully my Legend Cars experience will help put me in a good spot and lay a good foundation for me.  I know a lot of drivers have moved up from Legend Cars and had success so that gives me a lot of confidence.  I might not be blazing fast my first time out, but if I’m patient I can be there when the time comes down the road.  Guys like Teddy Hodgdon, Stephen Kopcik, Cory DiMatteo, Mike Christopher, and Steven Chapman, I’ve raced against them in Legend Cars and seeing them out there with the success they’ve had gives me confidence for the future.  I believe in my driving abilities and it’s just going to be a matter of getting comfortable in the car and keeping things clean every week.  I never had a DNF in my 3 years of Legend Cars and if I can do that again in the SK Lights, I think I’d be doing all right.”

The 2020 SK Light season kicks off with the 49th Annual NAPA Spring Sizzler® on April 24-26.  Tickets for the “Greatest Race in the History of Spring” are on sale now by calling the Speedway Box Office 860-684-2783 or online at www.staffordspeedway.com.