(Stafford Springs, CT)—Stafford Speedway returned to NASCAR Whelen All-American Series racing action on Friday, June 7 with Whelen Event Night / Kids Night. It was a banner night for Late Model driver Kevin Gambacorta as he celebrated his 11th wedding anniversary in style by winning the 30-lap Late Model feature and Gambacorta’s son Kolton won the Kids Big Wheel race that was held on the frontstretch as part of Kids Night. Other winners were Eric Berndt in the SK Modified® feature, alexander Pearl in the SK Light feature, Gary Patnode was a first time career winner in the Limited Late Model feature, and Zack Robinson won the Street Stock feature. 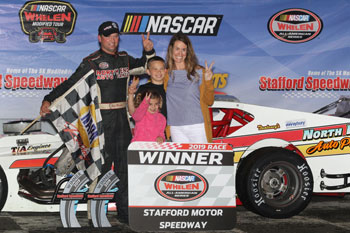 In the 40-lap SK Modified® feature event, Troy Talman streaked into the early race lead with Cory DiMatteo, Matt Galko, Eric Berndt, and David Arute making up the top-5. The caution came out with 3 laps complete for Darin Renihan, who got into the turn 1 wall and came to a stop against the retaining wall.

Galko nearly took the lead from Talman on the restart but Galko slotted back into line in second. Berndt was third in the order with Keith Rocco and DiMatteo side by side for fourth place. The caution came out with 8 laps complete as David Arute and Tom Bolles got into the frontstretch wall and Arute collected the cars of Nick Salva, Andrew Molleur, and Marcello Rufrano.

The restart saw Berndt make a 3-wide move to get by both Talman and Galko and move to the lead. Talman slotted back into line in second with DiMatteo, Rocco, and Glen Reen making up the top-5. Galko slid back to seventh in line behind Stephen Kopcik. Rocco took second from Talman on lap-13 and set his sights on narrowing the gap to Berndt for the lead.

Kopcik got by Reen to move into fifth on lap-17 and Joey Cipriano followed him through but Reen came back to the inside of Cipriano and the two cars raced side by side for sixth place with Todd Owen right behind them in eighth. At the halfway mark of the race, Rocco had closed the gap to Berndt down to approximately a car length with Talman third, DiMatteo fourth, and Kopcik fifth.

Rocco got by Berndt for the lead on lap-23 but his lead didn’t last long as Berndt retook the lead from Rocco on lap-25. Talman continued to run in third with DiMatteo fourth and Reen was fifth with Owen and Ronnie Williams right behind him in sixth and seventh place.

With 10 laps to go, Rocco was still giving chase to Berndt for the lead with Talman, DiMatteo, Reen, Owen, and Williams still making up the top-7.

Rocco couldn’t get close enough to Berndt to make a move as Berndt notched his second win of the 2019 season. Reen finished third with Talman and DiMatteo rounding out the top-5. 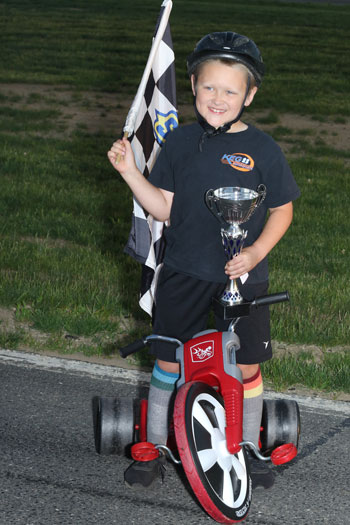 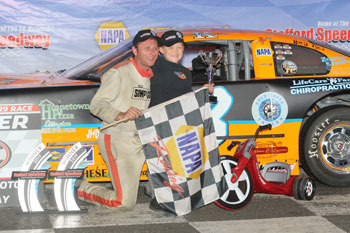 In the 30-lap Late Model feature event, Tyler Leary and Michael Bennett led the field to the green and they immediately ran side by side for a lap and a half before Bennett got clear into the lead. Cliff Saunders took second from Leary on lap-4 and Tom Fearn was right on Saunders’ bumper and he followed Saunders into third place to drop Leary back to fourth with Michael Wray fifth and Al Saunders sixth.

Cliff Saunders was working Bennett’s back bumper over but couldn’t make a pass stick as Bennett was able to stay out front. Wray and Al Saunders touched while fighting for fifth on lap-11 and Saunders developed a flat right front tire and limped his way back to pit road.

Cliff Saunders was still trying lap after lap to make a run to the inside of Bennett but Bennett was holding him off. Saunders was finally able to make a pass stick on lap-14 and he moved into the lead. Fearn took second with Leary taking third and Gambacorta taking fourth as Bennett slid all the way back to fifth. The caution came out with 16 laps complete for Gary Theriault and Paul Varricchio, Jr. who both spun coming out of turn 4.

The field completed one lap before the caution came back out for a spin in turn 2 by Richard Ciriello. The next restart saw Gambacorta almost go 3-wide with Saunders and Leary but he backed out of the move. Gambacorta came back strong on lap-19 as he took the lead from Saunders. Fearn was third with Leary back to fourth and Wray was still in fifth.

Fearn took second from Saunders on lap-20 and Leary followed him through to take third as Saunders slid back to fourth with Gambacorta still leading the way. With 5 laps to go, Gambacorta was still in command with a several car length lead over Fearn with Leary, Saunders, and Wray lined up behind Fearn.

Gambacorta led the field to the checkered flag to become the first repeat Late Model feature winner of the 2019 season. Fearn came home second with Leary, Cliff Saunders, and Wray rounding out the top-5. 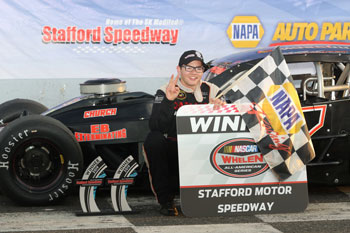 In the 20-lap SK Light feature event, Todd Douillard took the early lead at the drop of the green flag with Glenn Griswold immediately applying heavy pressure from second place. Alexander Pearl was third in the early going with Steven Chapman and Nathan Pytko lined up behind him.

Griswold got clear to the lead on lap-5 after several laps of side by side dueling with Douillard. Pearl pulled to the outside of Griswold and he powered his way to the front on lap-7. Steven Chapman made a dive to the inside of Griswold in turn 1 and they touched, which sent Griswold up the track into the path of Douillard to bring the caution out. Chapman was sent to the rear of the field by NASCAR officials for the contact with Griswold.

The field completed one lap before the caution came back out for Mark Bakaj, whose car came to a sputtering stop at the entrance to turn 3.

Pearl took the lead on the restart with Nick Anglace right behind him in second. Teddy Hodgdon came up to third with Bryan Narducci fourth and Mikey Flynn in fifth.

Pearl slowly pulled away from Anglace and secured his second win of the 2019 season. Hodgdon came home in third with Narducci and Flynn roundin out the top-5. 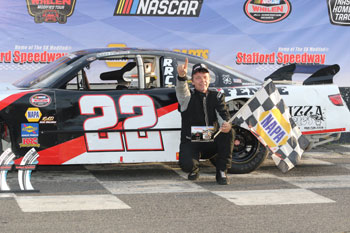 In the 20-lap Limited Late Model feature event, Alexandra Fearn charged into the lead at the green flag with Kyle Casagrande settling into second. Gary Patnode was third but he took second from Casagrande on lap-2. Patnode’s move opened the door for Jeremy Lavoie to move into third and drop Casagrande back to fourth with Matt Clement fifth.

Patnode got by Fearn in turns 3+4 on lap-4 to move into the lead. Lavoie took second from Fearn on lap-5 with Clement now up to fourth as Casagrande slid back to fifth in line. At the halfway point of the race Patnode was still in command with Lavoie all over his back bumper looking high and low for a way to move into the lead. Fearn was still third with Clement and Casagrande lined up behind her.

Lavoie was still hounding Patnode for the lead with 5 laps to go while Clement had gotten around Fearn to take over third with Casagrande still running in fifth. Lavoie tried his hardest to get by Patnode for the lead but Patnode was able to fend off his challenges and he took the checkered flag to record his first career Limited Late Model feature win. Clement finished third with Fearn and Casagrande rounding out the top-5. 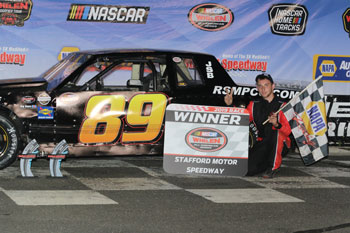 In the 20-lap Street Stock feature event, Adrien Paradis, III took the lead at the green with Travis Hydar coming up to second. Zack Robinson and Meghan Fuller were side by side for third with Nicole Chambrello sliding back to fifth after racing side by side on the first lap with Paradis for the lead.

Hydar moved to the lead on lap-3 and Robinson moved into second as Paradis fell back to third. Chambrello and Fuller were side by side for fourth when Chambrello got loose and did a half spin in the middle of turns 3+4 to bring the caution out with 4 laps complete.

Hydar took the lead back under green with Robinson hot on his heels in second. Fuller was third with Paradis fourth and George Bessette, Jr. fifth. Bessette took fourth from Paradis on lap-9 while up front Robinson got around Hydar to take over the lead on lap-10. Fuller was closing the gap to Robinson and Hydar to make it a three-car fight for the lead.

Fuller got by Hydar to take second as the cars came to the white flag but no one could catch Robinson as he scored his second win of the 2019 season. Rounding out the top-5 behind Robinson, Fuller, and Hydar was Bessette and Chambrello.