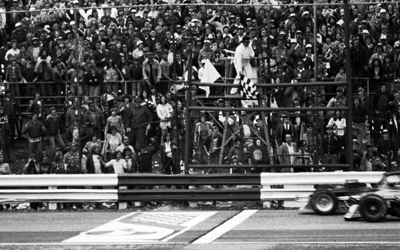 Howie Hodge took this photo that shows just how close Evans and Polverari were at the finish of the 1981 NAPA Spring Sizzler®. 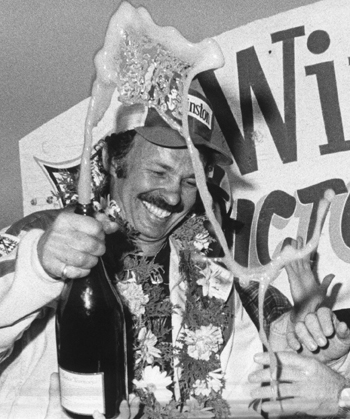 Polverari’s 1981 Sizzler victory still holds as the greatest Sizzler® in history. Polverari began the 80-lap race from the 13th position and didn’t take the lead for the first time until lap-71, when Maynard Troyer dropped out of the race with a faulty clutch. Troyer had inherited the lead on lap-58 from Richie Evans, who earlier in the day had set a new track record in qualifying. Evans was the race favorite and held the race lead from laps 24-57, after starting 10th due to a 10-car invert from qualifying. A flat tire brought him to pit road under caution on lap-58 and Evans had to restart at the rear of the field. The #61 quickly charged back towards the front but it looked like he might run out of time before he got back to the lead. A caution with 4 laps remaining for a spin on the frontstretch by George LeBlanc gave Evans the opportunity he needed to reclaim the lead. Evans quickly took second from Reggie Ruggiero on the restart and he and Polverari proceeded to treat the standing room only crowd to a thrilling duel, racing side by side for the final four laps. The dynamic duo came off the fourth turn heading towards the checkered flag still side by side with Polverari nipping the “Rapid Roman” by a nose at the finish line with the official margin of victory listed as approximately one foot.

“It was a lot of years ago, but I remember that race like it happened yesterday,” said Polverari. “The biggest reason why I can’t ever forget it was that Richie was a great friend of mine and to be running up front with him and the caliber of drivers like Reggie Ruggiero, George Kent, Maynard Troyer, and Corky Cookman, it was a great day and it was a great race to win. You go to every race thinking you’re going to win and I was only able to win a few races at Stafford so it was something that wasn’t going to happen every day. I had run second in the past at the Sizzler racing for Don Flynn, so I knew we were capable of winning the race. Plus when you’re racing against drivers like I just mentioned, that also lessens your chance of winning. But we were very fortunate that day, the car was set up just right and we had everything going for us. The big trick was to stay low and don’t let those guys get underneath you to get an advantage and the opposite of that is what happened. Richie was able to get to my inside and we ran a couple laps side by side and how I came out ahead coming out of the fourth turn I’ll never know, but we beat him to the line by a couple of inches. I’d say that Sizzler® win was definitely at the top of the races I won in my career.” 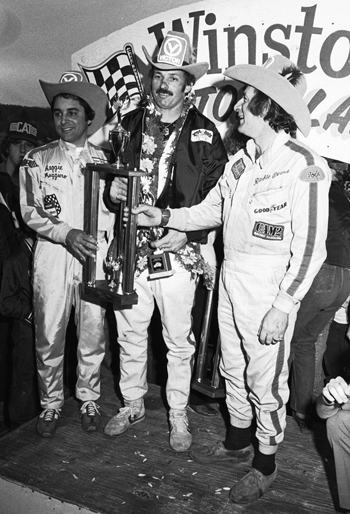 In 12 Career NAPA Spring Sizzler® starts, Polverari scored 1 win, 3 top-5, and 6 top-10 finishes. Polverari’s 1981 Sizzler® victory was one of three modified wins he had in his career at Stafford. Polverari really made a name for himself at Riverside Park Speedway, recording five modified track championships and 4 wins in the prestigious Riverside 500. Polverari began his Riverside career in 1954 and fittingly won the final modified feature event held at Riverside in 1999. Polverari is a 2003 inductee into the NEAR Hall of Fame.

“I loved Riverside,” said Polverari. “I raced there for a lot of years and the track just kind of grew on me. Winning the last race at Riverside was a big day for me and my car owners at the time. I started racing at Riverside when I was 16 years old and to win the last race there was fitting and it really meant a lot for me. There’s not a day that has gone by since I got out of racing in 2005 that I haven’t missed being behind the wheel.”