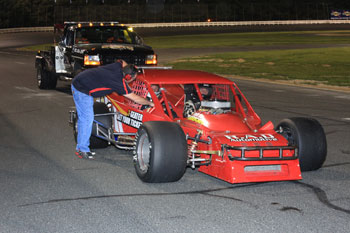 (Stafford Springs, CT)—With another season ready to kick off at Stafford Speedway, 5-time SK Modified® champion and 24-time feature winner Bob Potter is ready for another season of giving race fans the ride of a lifetime behind the wheel of the Stafford Speedway 2-Seater Modified. Potter will once again give fans a ride around the Connecticut half-mile facility at speed in one of four packages.

“This year will be the 7th season of taking people around the track and I still have lots of fun,” said Potter. “I’m grateful to Mark and Lisa Arute to give me the opportunity to still be behind the wheel and get around the racetrack. I’ve been able to meet so many great people over the years and the people you take along for the rides love you to death after its over. A lot of the folks I take out for a ride don’t think you really go that fast but that all changes once they’ve taken a ride. Another thing that surprises a lot of the riders is the g forces you feel in the seat. Being able to give someone the experience of what racing is really all about and seeing the smiles on their faces once they get out of the car, it’s a great feeling and it really makes me feel great in my heart.”

One thing for sure is that no matter what ride along package race fans choose, when they ride with Potter it is the closest thing a race fan can get to the truest experience that driving a modified has to offer.

“I’d say we get up to around 110mph top speed,” said Potter. “Whatever lap time the leaders do, sometimes the guys in the tower put a stopwatch on me and we’re not much slower than the leading SK Light cars. Everyone I take out on the track, they almost always have a friend or two with them and they’re always telling me to scare the crap out of rider. I give everyone the same ride at the same speed, I don’t try to put anyone in any dangerous situations and there’s no special rides for anyone.”

Working alongside Potter and maintaining the 2-Seater Modified is former DARE Stock driver Kris Fluckiger. Fluckiger is also a Lincoln Tech graduate who is now a professor teaching Automotive Collision at the East Windsor campus of Lincoln Tech. 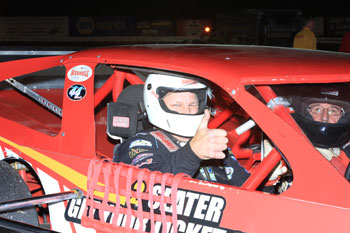 “I love working with Bob and I’ve learned a lot from him because he’s an old school guy and he’ll tell you anything you want to know,” said Fluckiger. “He’s a guy that could tell you how everything is and it won’t matter because he’ll go out on the track and outdrive you anyways. Bob is great, his wife Dale is great, and his daughter Ginny is always at the track so it’s a lot of fun to hang out with them. I’ve also been able to learn a lot about parts and upkeep on the car. We’ve had international clientele in the car with a couple of guys who were here from Japan and they had a blast in the car with Bob. A lot of the riders who I’ve talked to always like to brag to me about how they’ve gone 160mph before in a Cup car but they’re all wide eyed after taking a ride with Bob. I think our local short track 2-seater blows the doors off any Cup car experience you can have with the speed and g forces you experience being 2 inches off the ground in the car.”

It’s often said that Father Time is undefeated and yet the 76-year old Potter looks just as fresh as he did back when he was winning SK Modified® features and championships back in the ‘90s. But fans may want to act fast as this might be the last opportunity they have to join Potter for the ride of a lifetime. 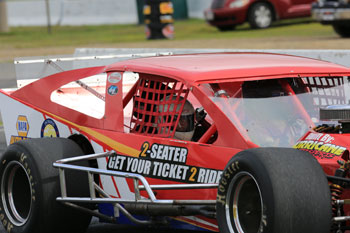 “This might be my last year, who knows?” said Potter. “It all depends on how I’m feeling and how things go.”

Fans can book their ride of a lifetime with Bob Potter by calling the Stafford Speedway office at 860-684-2783 and choosing a race date for their ride. Event tickets are required but not included in the price of the ride along experience.