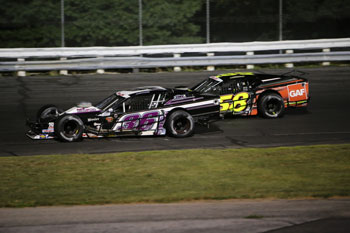 (Stafford Springs, CT)—At the beginning of the decade, when the NASCAR Whelen Modified Tour rolled into Stafford Speedway, Bobby Santos, III was the man to beat. In 16 starts from the beginning of the 2010 season through the 2014 NAPA Spring Sizzler®, Santos scored 6 wins at the Connecticut half-mile facility, including 2 wins in the NAPA Fall Final. Fresh off of a win in the Musket 250 at New Hampshire Motor Speedway last weekend, which was the first NASCAR Whelen Modified Tour victory for car owner Dave Sapienza and the #36 Sapienza Enterprises team, Santos is ready to return to his winning ways at Stafford.

“It’s awesome, it’s exciting, and it’s a big uplift for the team to be going into one of the biggest races of the year at the NAPA Fall Final with some good momentum,” said Santos. “I feel like I’m way overdue for a win at Stafford so I’m definitely looking forward to the weekend. We ended up breaking a spark plug the last race at Stafford but we had a good car and a good plan. I’m excited to come back to Stafford because for a while there I felt like I had a good handle on the track and it’s slipped away the last few years. I’m ready to come back to Stafford and show everyone that we can still win races there. It would be really cool if we could win the Fall Final and just to be in contention to win at Stafford would be really nice for us.”

Santos comes into the NAPA Fall Final winless in his last 17 starts at Stafford. In that 17-race stretch, Santos has only posted 2 top-5 and 7 top-10 finishes despite leading laps in 7 of those 17 starts, the same number of races that he led during the 16 race stretch that saw him win 6 times. 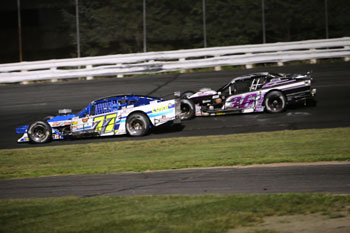 “I would say to run so well at Stafford and then not run well has been frustrating for sure the last couple years,” said Santos. “We’ve had some decent runs but we haven’t really been great so frustrating would be the right word to use. But that’s racing. As quick as you’re on top and winning, you can be on the bottom and trying to fight your way back up to the top. That just shows how good the competition is and how good the cars are. We just have to keep fighting hard to try to get back to the front.”

With Santos only running a partial NWMT schedule this season, he comes into the NAPA Fall Final sitting 29th in the points standings. With not having to worry about getting a good finish to maintain his position in the points standings, Santos can afford to take some extra risks to try to win the NAPA Fall Final whereas his fellow competitors might not be able to take the same kinds of risks during the 150 lap race.

“We have nothing to lose as far as strategy goes so we’re going to do whatever we have to do in order to put ourselves into position to try to win the race,” said Santos. “All those other guys are racing for points so I’d say we have a little bit of an edge over those guys. If it comes to a point where we have to make a strategy call that’s slightly different than what everyone else is doing, there’s no difference between winning or finishing 2nd through 10th as far as I’m concerned.” 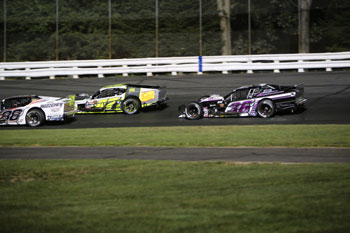 “Qualifying at Stafford has always seemed to be important,” said Santos. “If you qualify well, you usually run well and all the guys on the Tour have so much experience at Stafford. Typically the guys who are running well start up front and they’re tough to pass so no question you’ll need to have a good qualifying run.”

Although the August Stafford 150 went green from lap 1 to lap 146 before the first caution came out, Santos says he and the #36 team will prepare for the NAPA Fall Final just as they normally would for any other Stafford race.

“I think we’re probably going to prepare just like we would for any other Stafford race,” said Santos. “The last race at Stafford we just weren’t good enough at the start so it didn’t matter if it was a 140 lap run or a 50 lap run, we needed to be better at the start of the race. Obviously losing a spark plug didn’t help but we need to come out of the gate better. At the end of the day we actually had a good finish for how we ran. I’m confident we can run in the top-3 and contend for the win this weekend.”