Home › News › Brandon Michael Going the Distance at Stafford in 2018

Brandon Michael Going the Distance at Stafford in 2018 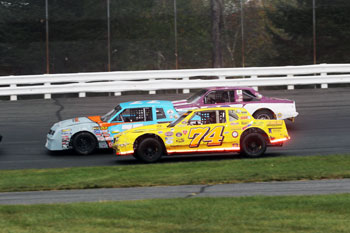 (Stafford Springs, CT)—After running a partial season in 2017, Granville, MA native Brandon Michael has his sights on running the full Street Stock schedule at Stafford Speedway and challenging for the track championship this season.

“The plan is to run for the championship this year,” said Michael. “We were one of the cars to beat the couple of times we showed up last year, we were just lacking a couple of things. We’re switching over to the manual transmission, which I think was the main thing we were lacking last season and we’re looking to have a lot of fun this year. The main thing for us is to be consistent every week, not necessarily winning every week, but being on the podium and keeping the points rolling.”

Michael is a 7-year veteran of what was formerly known as the DARE Stock division and although he has only run a full season in three of those seven years, he knows what it takes to be among the championship contenders. Michael and the #74 All Season Small Engine Repair team challenged Johnny Walker right down to the wire during the 2016 season and finished second in the standings. In his limited 2017 schedule he posted 6 top-5 and 8 top-10 finishes. With the level of experience he has built up through seven seasons of competition, Michael feels like 2018 will be his year to shine. 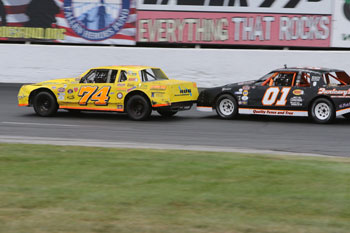 “I think we showed at the Fall Final last year that we were there, Johnny Walker just had a little more than we did,” said Michael. “With some of the stuff we found over the off season we can be even better than were last year. We have the same motor from last year and with rebuilding the suspension, the new transmission, and upgrading the car setup, we should be able to compete for the championship.”

Although Michael is confident in his chances to be a championship contender, he knows that wining the championship won’t be easy by any stretch of the imagination. Johnny Walker is the 2-time defending champion of the Street Stock division and with veteran drivers like Vince Gambacorta, Chris Bagnall, and Mike Hopkins along with young guns like Travis Hydar and George Bessette, Jr., who both won races as rookies last year, the race for the championship is going to be a tightly contested affair throughout the 2018 season.

“I think the division has become one of the most competitive around,” said Michael. “There were a lot of young kids that came in last year and by the end of the year they were completely different drivers. It hasn’t been easy the last couple of years but this year I think there will be just as much if not more competition with the young drivers having a year of experience under their belt.” 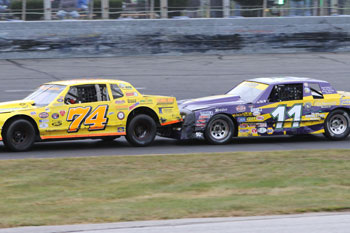 While acknowledging the tough level of competition, Michael can also take comfort in the fact that his experience has him more prepared for the new feature distance of 20 laps than some of the other drivers who only have one season of racing 15 laps of experience.

“We might have a slight advantage over some of the younger guys knowing the track a little better since,” said Michael. “I don’t think the 20-lap feature distance will affect us that much because of the combination of experience between myself and my crew chief, but some of the other drivers who haven’t had as much experience might struggle with the longer distance for the first few races. Weight is going to be a factor with the extra fuel in the car, and tires won’t last as long. After 3 races, you’re going to have 15 more laps on the tires than last year so it’s going to be interesting for sure. I know 5 laps doesn’t sound like much but when you’re out on the track you’re definitely going to notice. When you get to lap 15, you have to keep in the back of your head you still have 5 more laps to go. It’s going to be great and I like the longer races because it gives you a little more time to get to the front, you don’t have to rush anything.”

The 2018 Street Stock season kicks off at the 47th Annual NAPA Auto Parts Spring Sizzler® on April 27-29. Tickets for the “Greatest Race in the History of Spring” are on sale now at the Speedway Box Office. Tickets are priced at $40.00 for adult general admission tickets, $5.00 for children ages 6-14, and children ages 5 and under are admitted free of charge when accompanied by an adult. Reserved seating is priced at $42.00 for all ages. As always, Stafford Motor Speedway offers free parking with overnight parking available. All tickets are good for both Saturday and Sunday admission. All ticket prices include 10% CT Admission Tax. Discount Spring Sizzler® tickets will be available beginning in March at participating NAPA Auto Parts stores.