(Stafford Springs, CT)—Stafford Motor Speedway opened its doors for racing in 2018 with feature events for its Limited Late Model and Street Stock divisions as well as the New England Truck Series and Vintage All-Stars as part of the Saturday NAPA Auto Parts Spring Sizzler® Weekend festivities. Taking down feature wins were Justin Bren in the Limited Late Model feature, Johnny Walker in the Street Stock feature, Chip Grassie and Glen Billings in the Vintage All-Stars feature events, and Allen Coates in the N.E. Truck Series feature. 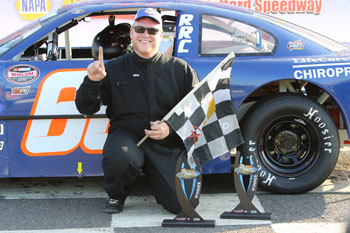 The 20-lap Limited Late Model feature took the green with Duane Provost powering into the lead with R.J. Surdell right on his bumper in second. Justin Bren was third and he quickly overtook Surdell to move into second on lap-2. Ryan Fearn was fourth with Alexandra Fearn in fifth.

Bren continued his charge to the front by taking the lead from Provost on lap-4. Surdell followed Bren into second to drop Provost back to third in the running order with Ryan and Alexandra Fearn continuing to make up the top-5.

With 5 laps to go, it was still Bren in command with Surdell and Provost locked in a duel for second behind him. The two Fearns were still running fourth and fifth. Bren went unchallenged to pick up a win in his return to Limited Late Model competition after sitting out the 2017 season. Surdell finished second with Provost, Ryan Fearn, and Alexandra Fearn rounding out the top-5. 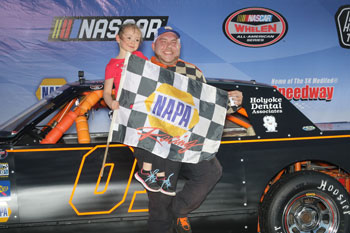 Walker stayed even with Hopkins on the restart before falling back into line in second as the two leaders completed the third lap. Bessette was third with Chambrello fourth and Gambacorta in fifth. Travis Hydar was sixth with Brandon Michael, Greg DeMone, Meghan Fuller, and Jason Lafayette making up the top-10. Tess Beyer spun in turns 1+2 to bring the caution back out with 5 laps complete.

Hopkins again took the lead back under green with Walker right behind him. Bessette, Chambrello, and Gambacorta continued to make up the top-5 with Hydar, Michael, Lafayette, Demone, and Fuller making up the top-10. The leaders ran in line until lap-13 when Bourdon and Jonathan Zunitch came together in turn 2 and brought the caution out.

Walker tried a crossover move on Hopkins but Hopkins was able to maintain the lead with Walker in second. Fuller got into the wall in turn 3 and collected Beyer to bring the caution right back out without completing a lap.

Hopkins took the lead but Walker took the lead from Hopkins in turn 1 on lap-15. Bessette was able to pull alongside Hopkins for second but he caution came back out for Beyer, who spun in turn 2.

Walker took the lead on the restart with Hopkins pulling alongside Bessette in a fight for second. Hopkins took the spot on lap-16 with Lafayette fourth and Chambrello fifth. The cutoin came back out with 16 laps complete for a spin in turn 2 by Fuller and Nick Bendiak.

Walker again took the lead while Bessette got by Hopkins to move into second. Chambrello was fourth with Gambacorta in fifth. Bessette was glued to Walker’s back bumper as they took the white flag. Walker held Bessette off over the final lap to take the first feature win of the 2018 season. Hopkins finished third with Chambrello and Gambacorta rounding out the top-5. 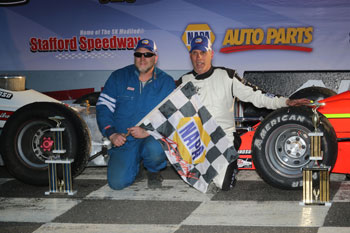 In the 15-lap Vintage All-Stars amateur feature, Gregg Massini took the lead at the drop of the green flag with Scott Poirier taking second from Jocelyn Laliberte on lap-2. Laliberte’s car dropped off the pace on lap-2 and he brought his car to pit road while Poirier took the lead from Massini on lap-3. Dean Mizzoni took second from Massini on lap-4 with Daryl Dutch fourth. The caution came out for a spin by Eddie Bohn in turn 1 with 6 laps complete.

On the restart, Massini and John Furno came together in turn 1 and brought the caution right back out. The next restart saw Poirier take the lead with Mizzoni right behind him in second. Dutch made a move to take over second on lap-8 with Seth Crocker up to fourth and Chip Grassie in fifth.

Dutch was hounding Poirier for the lead when on lap-12 Mizzoni took second going into turn 3. Grassie then got around Dutch for third and then Mizzoni for second before the caution came out with laps complete for a spin in turn 3 by Art Merchant.

The restart saw the top-4 of Poirier, Grassie, Mizzoni, and Dutch two wide like a pace lap with Grassie taking the win by a nose over Poirier. Dutch edged out Mizzoni for third at the line with Crocker taking fifth.

In the 15-lap Pro Vintage All-Stars feature, Ryan Preece and Ray Evernham swapped the lead on first lap and they swapped the lead again on lap-2 and lap-3 before the caution came out with 4 laps complete. Preece fell to the back under the caution, putting Glen Billings and Ray Evernham on the front row. Evernham took the lead but Billings was able to get back around him on lap-6 to move into the lead. Jeff Hummel was now up to second with Marty Van Druten in third with Evernham and Preece dueling for fourth.

Preece drove around Van Druten and Evernham to take third on lap-11 as Gagner continued to lead with Hummel in second. Evernham and Preece were dueling for third. Billings led Hummel to the checkered flag with Preece edging out Evernham for third. Van Druten finished fifth with El Herbert in sixth. 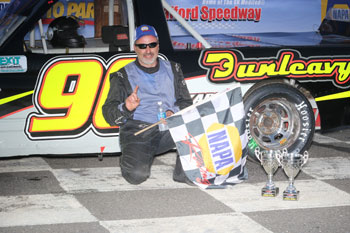 In the 25-lap N.E. Truck Series feature, Corey Coates took the lead at the green but the caution came out with 1 lap complete for spins in turn 1 by John Zoller and Mike Cavallaro.

Corey Coates took the lead on the restart with his father Allen Coates right behind him in second. Andy Lindeman was third with Gerald Giordano, Jr. fourth and Jim Boyle fifth. Dave Koenig spun on the backstretch to bring the caution out with 5 laps complete.

Corey Coates didn’t come up to speed on the restart allowing Allen Coates to streak into the lead with Lindeman taking second. Corey Coates settled into third with Giordano and Boyle making up the top-5. Allen Coates began to stretch out his lead over Lindeman and Lindeman would lose second to Corey Coates on lap-10. Giordano took third from Lindeman on lap-11 with Boyle in fifth as Allen Coates was still out front by a comfortable margin.

Allen Coates went unchallenged to the checkered flag to take the win with Giordano, Corey Coates, Stringer, and Boyle rounding out the top-5.