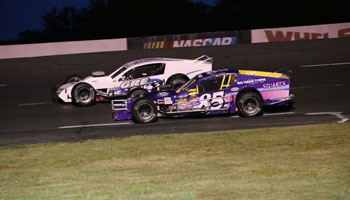 (Stafford Springs, CT)—Stafford SK Light driver Brett Gonyaw has teamed up with Bill Gaston from Gaston Racing Enterprises to field an entry for the Bud Light Open Mod 80 at Stafford, set for July 13. Gonyaw debuted with the #6 GRE6.com team one week ago in the Modified Racing Series event at Monadnock Speedway and came away with a 17th place finish. With that race under their belts, Gonyaw is looking to improve upon that 17th place finish at his home track of Stafford in the Bud Light 80.

“One of the first modifieds I ever drove was a Tour type modified a long time ago for Bruce Batchelder at Star Speedway and that’s what got me into modified racing,” said Gonyaw. “We ran Monadnock last week just to shake the car down and work the bugs out. It was a little bit of a challenge but the end result was we finished all the laps and got some seat time and we’re looking forward to doing the same thing at Stafford. We’re excited about being able to race with some of the big dogs at our home track and gaining some experience in these cars.”

The Monadnock race was a learning experience not only for Gonyaw behind the wheel, but for his crew members as well. Stafford SK Light rules don’t permit teams to make pit stops so Gonyaw’s crew was getting acclimated to being on pit road and changing tires during the race. Being the first race with the #6 car, the team had to deal with some gremlins during practice leading into the race, but they were able to achieve their goal of finishing all the laps.

“We learned a lot about strategy and team work as far as who needs to be doing what on pit road,” said Gonyaw. “Being on pit road was a big learning curve for our whole team and I’m sure we’ll learn a lot more as we go. We spent a lot of time during practice working the bugs out of the car since it had never been run before and now we can work on fine tuning the car.”

With Gonyaw in his second full season of SK Light competition at Stafford with 2 wins to his name, he is hoping that racing at Stafford will lessen his learning curve behind the wheel so the team can concentrate on car setup and what type of pit strategy they want to employ for the 80-lap race.

‘I think most of the guys who will be in the race have run at Stafford a few times before but it’s going to be fun to drive my home track in a 600 horsepower car instead of whatever the SK Lights have,” said Gonyaw. “I’m looking forward to racing with some guys with experience and trying to gain their respect while trying to race door to door with them and hopefully having some fun. Realistically for our first race out we’re not shooting for the stars just yet. A top-10 would be awesome for us and I’m looking to keep the car in one piece and and learn how to save the equipment for longer races. Going from 20 laps every week to 80 laps is a huge difference that requires a little more patience. One big thing I learned was how to tell when the tires are really burned out and need to be changed. In the MRS race at Monadnock, we swapped the right side tires and looking back now I think we swapped the tires a little to late, so that’s another learning curve in itself with the pit strategy. Everyone on the crew is pumped up for this race and without the expectation of winning, it takes some stress away from us and it brings the team factor back into things and helps us dig even harder when we’re out on the track.” 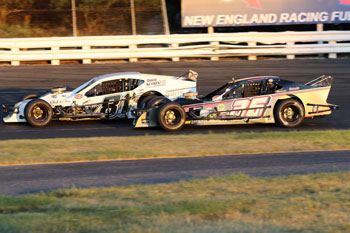 In addition to the Bud Light 80, Gonyaw will be looking to get his 2018 SK Light season back on the right track. The season got off to a promising start with Gonyaw recording top-9 finishes in the first 5 races, but the last 6 races have seen Gonyaw outside of the top-20 in 4 races, dropping him from the lead of the SK Light standings after 5 races down to 9th, 116 points behind Bryan Narducci.

“We’ve had a rough go around the last couple of weeks so we’re looking to get some good momentum going for us,” said Gonyaw. “We have a lot of things to work out with the car. It’s been fighting us this year with the setup and I think we finally got it turned around. A lot of it for us has been being in the wrong place at the wrong time. We’re going for as many wins as we can get now. At first, our focus was on running for the championship but I think when we start to focus on that, that’s when bad things start to happen whereas if we just focus on going for wins, it seems to work out better for us.”