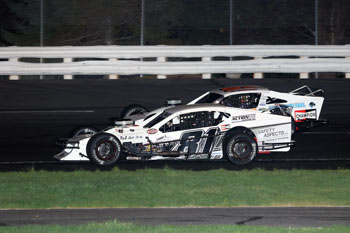 (Stafford Springs, CT)—What a difference one year can make. Last season, Brett Gonyaw and the #81 Johnny’s Mud Runs SK Light team got off to a slow start at Stafford, but a win on Dunleavy’s Modifiedz Night that was worth $2,775 in purse and contingency bonuses turned their season around.

“I think we’ve just started to get our momentum going at Stafford so hopefully it can be like last year and we can come out with a win and set ourselves up for the rest of the season,” said Gonyaw. “Our goal for every race is to win and it would be pretty sweet to be able to win the Dunleavy’s race again. Winning that race last year really helped get us through the season and it would be the same effect if we can win it again. We’re all smiles and I’m ready to put a bulls-eye on the back of the car. Everything has been positive so far this season and everyone has been driving respectful. Sometimes it gets crazy with 3-wide moves, but somehow the guys are making it happen.” 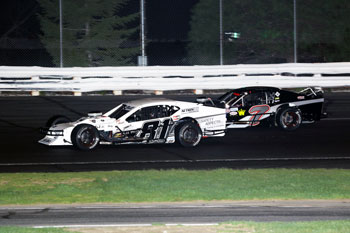 The favorite to take the checkered flag and a share of the $9,940 total purse in this year’s Dunleavy’s Modifiedz Night feature is anyone’s guess. Through the first four races, four different drivers have reached NAPA Victory Lane with Marcello Rufrano, George Nocera, Jr., Bryan Narducci, and Andrew Molleur all grabbing wins. Gonyaw would like nothing more than to make it five winners in five races and repeat his victory of last year in the Dunleavy’s Modifiedz Night extra distance 40 lap feature.

“A win in this race would take our team to the next level just like it did last year,” said Gonyaw. “It would be extra bucks in our pockets to try some things that we’ve been wanting to try with the car and it would bump our team morale way up. I think we have a lot more left and this Friday night would be the perfect opportunity to show that. If we can have a good run, that could carry us through the summer with positive momentum.”

With 40 laps being the race distance, SK Light drivers will have twice as long as normal to work their way through traffic and get to the front. In last year’s event Gonyaw inherited the race lead late on a restart with 7 laps to go. While Gonyaw says he is still looking for speed out of his #81 car, he is confident that he has a setup that will be good to go 40 laps. 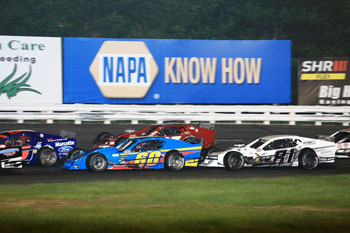 “We’ve been playing with the setup this year. Danny Wilson, my crew chief, has been working on fine tuning the car to make it maneuverable and we’re going to keep working on it,” said Gonyaw. “The car has been getting better and better each week and I think we have everything falling right into place for Dunleavy’s Night. Everyone is going to be racing as hard as they can to get to the front. Our strategy last year was to relax and take it easy a little at the start of the race but with the competition we have now, we’re going to have to get out front quick. We have a couple of really fast cars that we have to compete with this year and it’s going to be a lot of fun trying to chase them down. We just have to get out there and go for it.”

Dunleavy’s Truck and Trailer Repair Modifiedz night is Friday, May 25th. General admission gates open at 5:15 pm, qualifying races begin at 6:15 pm, with feature racing scheduled to begin at 7:15 pm. The night will be capped off with a Fireworks display in honor of Memorial Day. Tickets are just $18.50 for adults, $5 for kids 6-14, and as always 5 & under free. Reserved seating is priced at $20 for all ages. Tickets are priced at $10 for Active or retired Military members showing proper ID. All tickets include 10% CT Admission Tax.