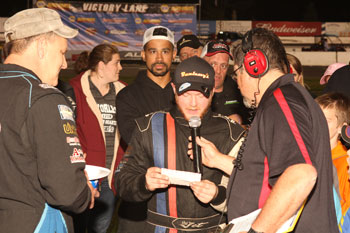 (Stafford Springs, CT)—The inaugural Dunleavy’s Modifiedz Night is in the record books. The SK Lights raced 40-laps for the biggest purse in the history of the division thanks to Doug Dunleavy. Vernon native Brett Gonyaw was the big winner taking home $2,775, driving his #81 Johnny’s Mud Run sponsored machine into NAPA Victory Lane. The total posted awards in the race exceeded $14,000. Bill Gaston of Gaston Racing Enterprises (gre6.com), put up a total bonus of $1,500 that was split among the top-4 finishers in each heat race. Don Wood from R.A.D Automachine and Tony Alteri from T/A Engines both put up $1,500 that was split among the top-3 finishing cars with a R.A.D. or T/A engine. Gonyaw won the $750 bonus from R.A.D. Automachine for being the top finishing car with a R.A.D. engine and the weekly contingency bonuses from Dunleavy’s Truck and Trailer Repair, Maybury Material Handling, and New England Racing Fuel, Sunoco Brand. Gonyaw says he and his team will put that money right back into their car, which reached victory lane with a bent clip. 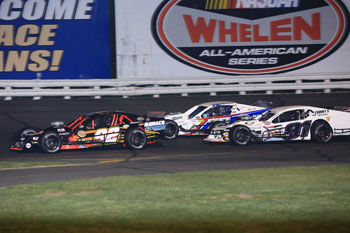 “This is the biggest win we’ve ever had,” said Gonyaw. “We’re still riding the high. We didn’t have the best car out there, but I think we were a little more patient. Now we have to work on getting the car to be good for 20 laps. We’ve been struggling at Stafford a little bit so the win helps to have the right mindset of going to the track to win races. The extra cash we won will also be a big help. We’ve been going race to race with whatever we have in the bank and if we can line up a tire sponsor for the week then that’s a plus. We’ve been really lucky this year with people coming on board and helping us out. Our car actually needs to be clipped because it’s been bent since we raced it at Thompson and we’ve just been trying to work with it. Hopefully we’ll be able to find even more speed in the car once we put the new clip on it. Our main thing will be to get everything prepped so we can have a successful middle and end of the season.”

Patience was definitely a virtue for Gonyaw and the #81 team during the 40-lap race. Gonyaw started the race from 7th and he raced in the bottom half of the top-10 for the first half of the race. He didn’t crack into the top-5 until a restart with 7 laps to go and he took over the race lead when race leaders George Nocera, Jr. and Cory DiMatteo made contact and brought the caution out with 7 laps to go. Once Gonyaw was in the lead, he never relinquished it over the final 7 laps and he took down his first career victory at Stafford Speedway. 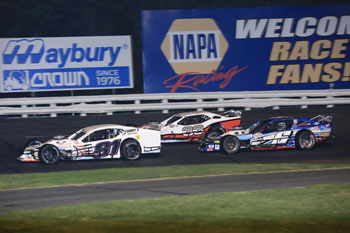 “We have a couple of wins this season already but we had nothing yet at Stafford,” said Gonyaw. “Realistically it was more my driving style for 40-laps that paid off for us. You can stay calm in the car and not have to be so aggressive with your moves. There were a lot of wrecks that I think could have been avoided because I think we’re all so used to going 20 laps and if you start 19th or 20th, you have to pass a car a lap to get to the front. Knowing that we didn’t have the best car, I tried to distance myself from the front and the rear packs knowing that it was going to get dicey up front and put myself into a position that we could run strong for the second 20 laps instead of ripping the car apart in the first half of the race.”

The race victory was also a boon for Gonyaw and the #81 team in the points standings. After entering the season with aspirations of running for a championship, Gonyaw found the track at Stafford to be a bit of a muddy ride as he had three finishes of 14th or worse. He found himself 17th in the standings entering the Dunleavy’s Modifiedz Night. With his win, Gonyaw leapfrogged up to 12th in the standings and cut his deficit to point leader George Nocera, Jr. from 90 points behind down to 62 points behind. 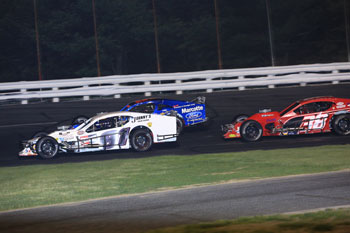 “I got a little disappointed at the beginning of the season because we got beat down a little and it seemed like we’ve been either wreckers or checkers this year,” said Gonyaw. “Our main goal was to run for the points championship and I thought maybe we were losing our grip on that a little. But the way things are looking right now, we might be able to get ourselves back in the hunt and hopefully we can climb that ladder one spot at a time. We don’t necessarily need to win every week but we need to be in the top-5 every week to be able to win the championship. I believe we can get back to victory lane again. It’s not a case of us coming to the track each week saying ‘We’re going to win,’ but I do think we have some more wins in our future.”

With some winning momentum on his side and the biggest winner’s paycheck in the history of the division, Gonyaw and the #81 team will be ones to watch as the Stafford schedule hits the summer months.

Gonyaw and the SK Lights will be back in action this Friday night, June 16th along with the SK Modifieds®, Late Models, Limited Late Models, DARE Stocks, and a special Friday night appearance by the Wild Thing Kart Junior Outlaws. Tickets for this Friday night’s program are priced at $17.50 for adult general admission tickets, $5.00 for kids ages 6-14, and kids 5 and under are admitted free of charge when accompanied by an adult. Reserved seating will be priced at $20.00 for all ages. All ticket prices include 10% CT Admission Tax. Stafford Speedway offers free parking with free overnight parking for self-contained RV’s available.