(Stafford Springs, CT)—The Call Before You Dig 81 Tri-Track Modified Series race scheduled for this Saturday, October 24 at Stafford Speedway, has seen the entry list grow to 50 cars.  While only one car will be able to take home the $10,000 winning payday, the field is packed with driving talent from several different touring divisions as well as the weekly racing ranks.  To further illustrate the wide variety of talent that will be part of the show, 15 of the 50 entries received as of Monday, Oct. 19 have raced an SK Light at Stafford and 26 of the drivers have won a feature at Stafford.  Here we take a look at each of the 26 different drivers entered into the CBYD 81 who have won a race at Stafford in their careers. 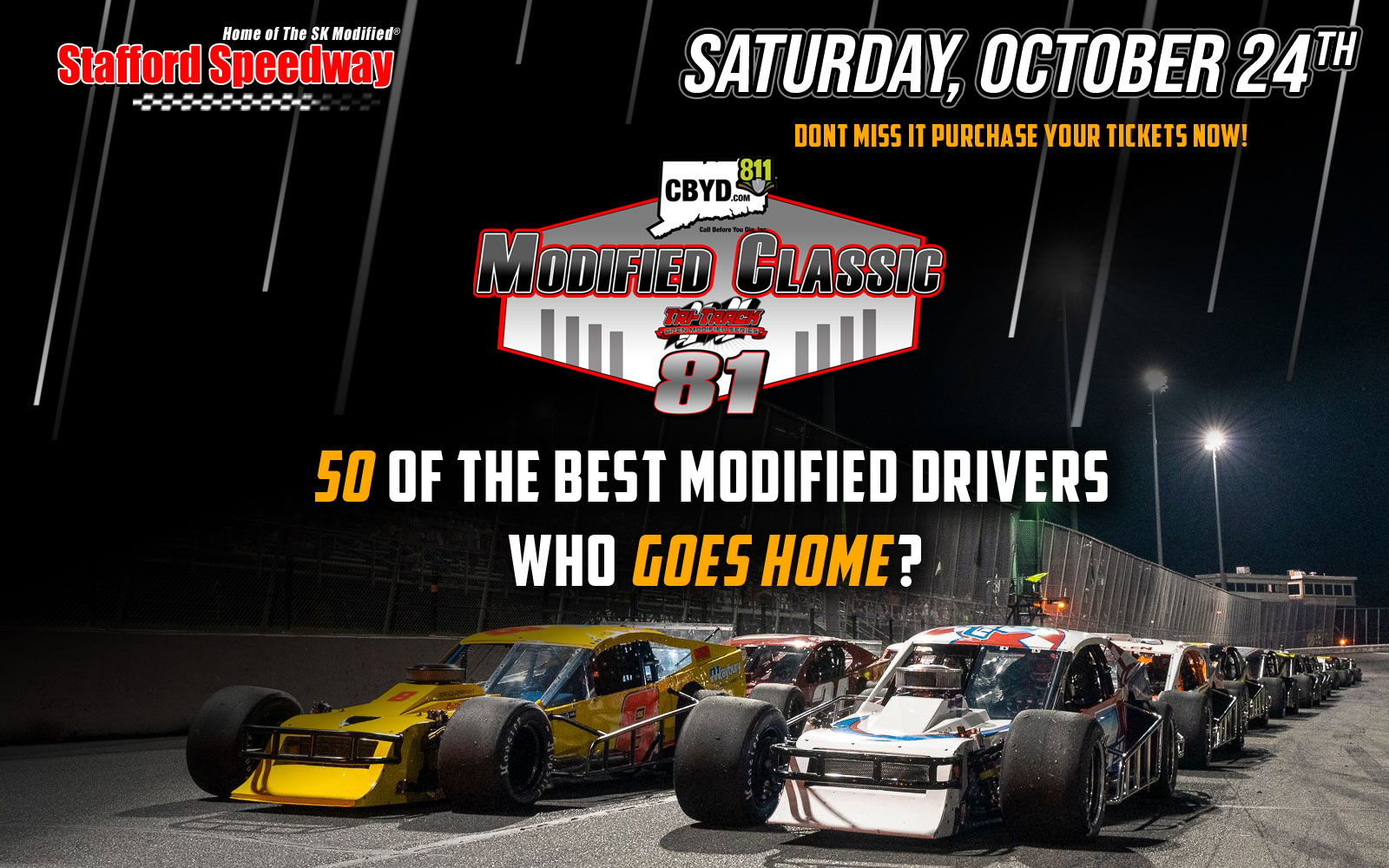 Tommy Membrino, Jr. – #00 Membrino Racing – Membrino has 3 career SK Light feature wins to his credit at Stafford.  He won twice in 2009 with his most recent win coming in 2011.

Joey Cipriano – #1 Superior Refinishing Chevrolet – Cipriano has 8 career Stafford wins.  Cipriano won his first race in the SK Light division in 2010 and followed that up with 6 more SK Light wins in 2011 before winning his first and thus far only SK Modified® feature in 2018.

Matt Swanson – #3 USNE / Propane Plus Chevrolet – Swanson only made 10 starts during a partial schedule as a 15-year old rookie driver in Stafford’s SK Light division in 2015, but he captured his one and only Stafford victory in his 6th start.

Michael Christopher, Jr. – #7ny Mohawk Northeast Chevrolet – Christopher has 5 career SK Modified® wins and counting at Stafford.  Christopher won his first 4 races in 2018 and his most recent win was Oct. 2 of this season.

Nick Salva – #8 Seekonk Grand Prix Chevrolet – Salva has 5 career feature wins at Stafford.  Salva’s first Stafford win came in the DARE Stock division in 2010 before he won 2 SK Light features in 2014 and another 2 in 2015.

Jon McKennedy – #21 Spearpoint Racing Chevrolet – McKennedy has recorded 4 career feature wins at Stafford.  McKennedy has 2 MRS wins coming in 2012 and 2016 and he swept a pair of MTS feature events in 2017.

Troy Talman – #23 American Military University Chevrolet – Talman scored his one and thus far only career Stafford feature win in the SK Light division back in 2013.

Dave Etheridge – #34 Warner Turf Equipment Chevrolet – Etheridge has 5 career Stafford wins, but he hasn’t won a race at Stafford in over 20 years.  All 5 of Etheridge’s wins at Stafford came in the ProStock division with one win each season from 1993-1997.

Andrew Molleur – #35 Call Before You Dig Chevrolet – In his brief Stafford career to date, Molleur has 5 wins to his credit with 4 SK Light wins in 2018 and a win as an SK Modified® rookie driver in 2019.

Noah Korner – #50h Sales Auctions Chevrolet – Korner is a 2-time winner in Stafford’s SK Light division with both of his wins coming in the 2019 season.

Eric Goodale – #58 GAF Roofing Chevrolet – Goodale has 2 career wins at Stafford with a Whelen Modified Tour victory in the 2017 NAPA Fall Final and a win in the 2018 Bud Light Open 80.

Shawn Thibeault – #74 Enterprise Rental Car Chevrolet – Thibeault has 7 career Stafford wins with all of his victories coming in the Limited Late Model division from 2009-2011.

Anthony Nocella – #92 Nocella Paving Chevrolet – Nocella has 1 career Stafford victory to his name with that win coming in an MRS race back in May of 2017.

Richard Savary – #99 Alloy Wheel Repair Specialists Chevrolet – Savary has 1 career Stafford victory to his name with that win coming in an MRS race back in August of 2018.

Joining the Tri-Track Modifieds in feature action this Saturday will be Stafford’s SK Lights and Street Stocks.  Tickets for CBYD 81 are on sale now with adult general admission priced at $35.00, $10.00 for kids ages 6-14, kids 5 and under are admitted free.  Paddock passes are priced at $50.00.  This event is expected to sell out so fans are encouraged to order tickets in advance online.  Fans who cannot attend the CBYD 81 in person but would still like to watch can order a live stream of the event from www.staffordspeedway.tv for $30.