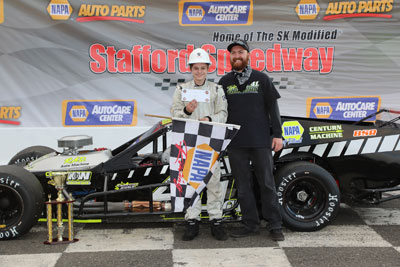 In the 25-lap SK Light feature event, Brian Sullivan took the lead at the green with Tyler Chapman taking second.  Jonathan Puleo was third followed by Steven Chapman but the caution flew with 1 lap complete for a spin in turn 3 by James Houghton.

Tyler Chapman took the lead back under green with Sullivan slotting into second.  Steven Chapman was third followed by Puleo and Buddy Charette.  Charette had a host of cars lined up behind him including Peter Bennett, Norm Sears, George Bessette, Jr., Robert Bloxsom, III, and Derek Debbis.  Bennett took fifth on lap-7 while up front Steven Chapman was applying heavy pressure to Sullivan for second place.  The caution came back out with 11 laps complete for Anthony Forino, who spun in turn 1.

Tyler Chapman took the lead on the restart with his brother Steven taking second.  Sullivan fell back to third in line with Puleo fourth and Bennett and Sears side by side for fifth place.  With 5 laps to go, it was still Tyler and Steven Chapman out front followed by Sullivan, Puleo, Debbis, Bennett, Sears, and Bloxsom.

Steven was able to get to Tyler’s bumper but couldn’t find a way around as Tyler picked up his first modified feature win at Stafford.  Sullivan, Puleo, and Debbis rounded out the top-5. 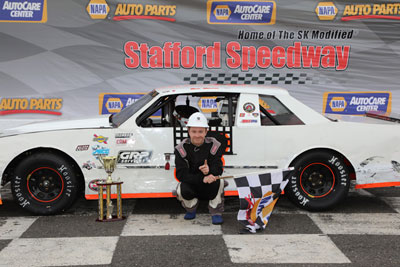 In the 25-lap Street Stock feature event, Frank L’Etoile, Jr. shot into the lead at the drop of the green flag with Brandon Michael taking second place.  Nickolas Hovey slotted into third place with Adrien Paradis, III and Brent Gleason rounding out the top-5.  Jason Futoma spun on the frontstretch with 1 lap complete but was able to get moving again but the caution flag did fly with 4 laps complete for Jason Finkbein, Thomas Hanley, and Larry Barnett, who all spun and hit the turn 3 wall.

L’Etoile took the lead on the restart with Paradis moving into second.  Michael was third with Gleason fourth and Hovey fifth.  Travis Hydar took fifth place from Hovey on lap-6 while Michael held off a challenge from Gleason for third.  Hydar made a move to take fourth from Gleason on lap-10 while L’Etoile was still in the lead with Paradis and Michael giving chase.

Hydar continued his charge towards the front as he took third place from Michael on lap-15 and he was looking to take second from Paradis when the caution flew with 16 laps complete for Hanley, who spun in the middle of turns 1+2.

L’Etoile took the lead back under green while Hydar got by Paradis on lap-18 to take over second place.  Michael was fourth in line with Hovey and Gleason behind him.  Hovey drifted up the track in turn 4 on lap-21 which allowed Gleason to move into fifth while Hovey got back in line in sixth place.  Hanley spun in turn 4 to bring the caution back out with 23 laps complete and set up a green white checkered finish.

L’Etoile and Hydar were side by side on the restart with L’Etoile taking the lead on the backstretch on the final lap.  Hydar and L’Etoile touched  going through turn 4 on the final lap which got L’Etoile loose and almost gave Paradis an opening to go from third to the lead and the win but L’Etoile was able to hold on and he took the checkered flag for the win.  Paradis edged out Hydar at the line for second place with Gleason fourth and Hovey rounding out the top-5.